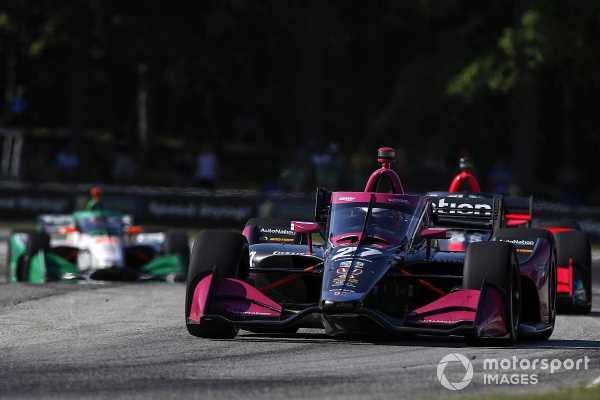 Felix Rosenqvist won the second race of the Road America REV Group Grand Prix double header on Saturday, the fourth round of the NTT IndyCar Series near Elkhart Lake, WI – after a fierce battle with Pato O’Ward.

The opening lap of the race claimed two victims with big crashes – both initiated by Team Penske’s Will Power. First of all, he clipped Ryan Hunter-Reay on the run to Turn 1, sending Hunter-Reay spinning into the wall and out of the race. Seconds later, Power clashed with Graham Rahal, whose car got into a tankslapper on the kerb, bounced off Felix Rosenqvist, and then slammed into a concrete wall.

At the restart, pole winner O’Ward led Colton Herta and Alex Palou. Saturday’s winner Dixon was up to fourth, as fifth-placed Power was demoted to 22nd by stewards for “avoidable contact”. Power then suffered a wild off that ended in the gravel on Lap 6, causing another yellow.

Palou passed Herta for second at the restart on Lap 8, while O’Ward made hay out front and pulled out a substantial lead. Dixon struggled with his rear tire life in the middle stages, slipping back behind Alexander Rossi, Herta and Marcus Ericsson.

Rosenqvist was one to watch, despite his early clash with Rahal, as he surged through to second position to run just 3s behind O’Ward. But a slow pitstop – when they dropped the car off the jack without one of the wheels attached – meant he lost valuable ground to O’Ward.

Rossi passed Palou for third just before half distance, and Palou then tumbled down the order as his car lost grip in the penultimate stint. Ericsson passed Herta for fourth on Lap 40.

O’Ward appeared to be struggling with his rear grip from using scrubbed red tires, and had to save fuel in the closing stages, so Rosenqvist was able to carve into his 8s lead. O’Ward was further hampered by being unlapped by Conor Daly, with whom he clashed on Saturday. Rosenqvist got to within 1s with three laps to go, and passed O’Ward on the penultimate lap to score a hard-earned victory.

Points leader Dixon stalled after his final pitstop, dropping him back to 12th.