John Della Penna, former driver and successful team owner, has died at the age of 68. His first protégé, Jimmy Vasser, tells David Malsher what made the California-based Argentine unforgettable.

“Everyone knows it takes a village to get any driver without blue blood into the top levels of racing,” says 1996 CART Indy car champion Jimmy Vasser, now a successful team owner in IndyCar and IMSA. “In that village are key characters that make the difference: John Della Penna was one of those guys for me. He was instrumental in extending my career so I could move on up.”

Zak Brown, McLaren CEO, said: “John was one of my best buddies. I first met him when he was running my good friend Jimmy Vasser. John was a first class guy and a proper racer.”

Born in Buenos Aires in 1951, Della Penna grew up idolizing Juan Manuel Fangio and was eager to get into racing. His parents didn’t approve but they were supportive.

Speaking in the mid-1990s about his roots, Della Penna explained: “When I was going to high school, my Dad promised me that if I graduated with good grades, he would buy me a ticket – a round-trip ticket, mind you! – to the United States, and he did.

Having bought a Crosslé 16F and all its attendant accouterments and spares, the now San Francisco Bay-domiciled Argentine in his early 20s would go on to become a respectable racecar driver, finishing third in the SCCA Formula Atlantic’s West Coast Division in 1984. But it had been a struggle to find even meager sponsorship funds to add to whatever he could extract from his own bank account and, being a realistic man, Della Penna knew that method of going racing was a fool’s game, and so he quit the racing scene.

As things would transpire, his departure was only temporary. By then, he had met Jim Vasser Sr., father of rising star SCCA Formula Ford racer, Jimmy Vasser – indeed, when the youngster had started racing, Vasser Sr. had purchased his old trailer from Della Penna. The pair had gotten along well, sharing not only a love of motorsport but also a passion for the business of brokering collector cars and buying auction lots wholesale.

When Della Penna decided to return to the sport, buying a Swift DB-4 to enter in Formula Atlantic, their paths would cross again, for young Jimmy Vasser would soon join his team. This was something a blessing for the 25-year-old JV because despite his promising talent, the 1986 SCCA Formula Ford 1600 champion had only reached FF2000 level by 1990. Then he got the call that would put his career back on the fast track.

“John was running an Atlantic car in partnership with Genoa Racing, owned by Angelo Ferro,” recalls Vasser. “Bob Lobenburg was driving, but the rear wheel kept shearing off the halfshaft and he was crashing. They were at Sears Point [now Sonoma Raceway] and finally Bob refused to drive it, so John called me on a Saturday evening while I was in San Jose, and said: ‘Get your ass up here if you want to drive this Atlantic car, and start from the back.’ I said, ‘Hell yeah! I’ll drive it’. I didn’t mind starting from the back because I’d missed qualifying. Any experience is good.

“So anyway, I went up there, I got a good start and I really moved through the field; I think by the third lap I was in fourth place. Then, sure enough, the wheel fell off and I went off hard at Turn 4, just before the Carousel. But the team said, ‘That was a great job you did for a couple of laps,’ and so they had me run at Laguna Seca and I got pole. Then at Road America for the Atlantic East/West division shootout, we were support race for CART [Indy car] and we pretty much dominated.”

Recalled Della Penna: “We just loaded the car up, went to Road America and unloaded the trailer, and we were fastest every session, put it on pole and won the race. For me that was really the turning point as a team owner.”

Vasser’s sudden spring back to prominence that year earned him the inaugural Team USA Scholarship, a program that exists to this day and which has just seen its alumni score a clean sweep of championships in IndyCar and the three Road To Indy series.

Indy car team owner Rick Galles saw what Vasser had achieved and had his son Jamie join the Della Penna team for ’91 as teammate to Vasser. Jamie was good, scoring a couple of podiums and taking a pole, but Jimmy was The Man, amassing six wins and eight poles – albeit somehow finishing runner up in the championship to two-time race winner Jovy Marcelo.

“I think I won any race I finished that year, but we didn’t finish enough,” recalls Vasser. “But one of my best memories of that year was at Long Beach. I put it on pole and I’ve been leading the whole race, and then on the last lap, going down the back straight [Seaside Way] I radio in – John was on my radio that whole year – and I yell, ‘F**k! The car’s stopped running! The car’s stopped running!’

“I’m only joking, but we’re getting ready to win Long Beach and I’m pulling John’s strings. He’s on the pitwall on the front straight over at Shoreline Drive, and when he hears me he takes his headset off, takes his radio off, and throws them on the ground and walks off disgusted. So when I go driving down Shoreline to take the checkers he misses it, doesn’t realize we’ve won until he sees all the crew, and mechanics pointing and laughing…

“For the rest of his life, whenever we were together at a party or whatever, he’d point to me and tell everyone the story and say, ‘This f***er here, he got me good!’

“Yeah, we didn’t win the championship but our run of wins is what led to me meeting Jim Hayhoe, who took me IndyCar racing the next year. That can be directly traced back to John Della Penna, as well as Angelo Ferro and Rick Galles who both put money up for me. So that’s what I mean when I say it takes a village. The important thing when you get chances like those guys gave me is to go out and win – and we did.

“Their efforts and the great team that John put together produced the results, which is why Jim Hayhoe took a chance on me. What me and Jim then achieved together was only moderately successful compared with the big Indy car teams of the time, but it got noticed and that directly led to Chip Ganassi taking a chance on me in ’95, even when he didn’t have a fully funded second car. We scored a bunch of podiums that first year, and then in ’96 we won races and won the championship.

“So those guys – and John Della Penna was the first – are the kind of people that every driver needs onside, the ones that put their faith in me enough to provide competitive cars when I didn’t have any money to contribute.”

Ask what Della Penna was like as a person, and Vasser responds immediately, “Oh, he was great and with a great sense of humor, but he was also hard. He was diminutive in size but very strong in character, I guess because he had been a racer. But he was also smart.”

Indeed so. When Vasser moved up to Indy car in 1992, JDP couldn’t find the right combination of driver and sponsorship to replace him, so rather than struggle along as a team owner with a half-funded team running a half-talented driver, and making a half-assed job of the whole project, Della Penna Motorsports went on hiatus for two seasons.

“That was a hard time when Jimmy moved on,” said Della Penna, “because the idea was that my timetable was five years from Atlantics to Indy cars as a team owner. I started in 1990 part-time, ’91 was our first year, so ’96 was kinda my timetable to be in Indy cars.

“In 1993, I started scouting around for who would be the replacement for Jimmy. Someone I could work with, someone that I had good chemistry with, somebody that I had a lot of faith in, that I admired. It had to be somebody pretty special – really fast, really motivated with a lot of what I call killer instinct on the track. Somebody who would go out there and want to win every time.” 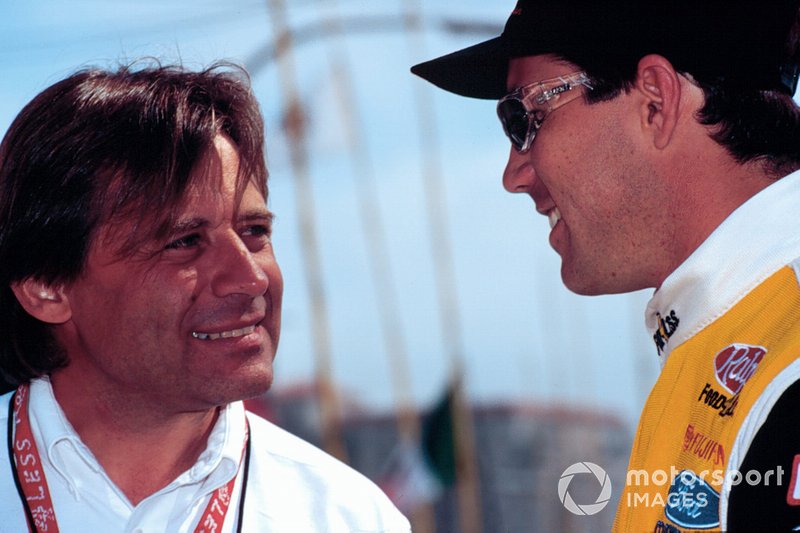 John Della Penna with Richie Hearn, who would win for the team both the Atlantics title and an Indy car race.

He jumped at the chance to run Richie Hearn, who would go on to finish second in the 1994 Atlantic championship.

“I didn’t want to leave the Atlantic series without winning the championship,” explained Della Penna, “but I didn’t want to hold back Richie’s career, either. So I felt if he was ready to move up and he hadn’t won the championship then we’d move up. But he said to me, ‘Look John, I think it’s best for me to stay another year. I don’t think I’m ready [for Indy cars] yet.’”

The combo duly completed their task in ’95. That would prompt Della Penna Motorsports to finally graduate to Indy car racing with Hearn as his principal driver, using a Reynard-Ford eligible for both the newly formed Indy Racing League and CART Indy car. In the IRL, Hearn would score a fourth at Phoenix, finish third in the Indy 500, and win at Las Vegas, while in CART the Hearn/Della Penna pairing would accumulate a few top six finishes before splitting at the end of 1999.

The following year, ex-Formula 1 driver Norberto Fontana joined Della Penna Motorsports but he never looked comfortable in what was by then a Reynard-Toyota combo, and by midseason he had been replaced by Memo Gidley. The brave American would land a sixth at Road America, but at year’s end Della Penna was done with running a race team. He sold his shares in CART and used the money to build hotels, again proving that if he couldn’t go racing the right way, he’d rather not bother at all.

“Yeah, pretty smart, huh?” comments Vasser. “As a team owner, he had always seemed to avoid taking pay drivers, which you’ve got to admire, right? The drivers of his cars deserved rides. And even those who weren’t driving for him, he would be prepared to help or advise and without looking for paybacks. He helped guys like Willy T. Ribbs, Juan Fangio II and so on. John had a good eye for talent and a good heart.

“This is…  Man, this is a really sad time. He used to come back and join us for the Indy 500, and it was always a pleasure to have him there. He was just a great guy to be around someone who loved racing and had a big heart. He had a really good way with drivers – calming and kind-hearted but also tough when he needed to be. A real asset to motorsport, that’s for sure.” 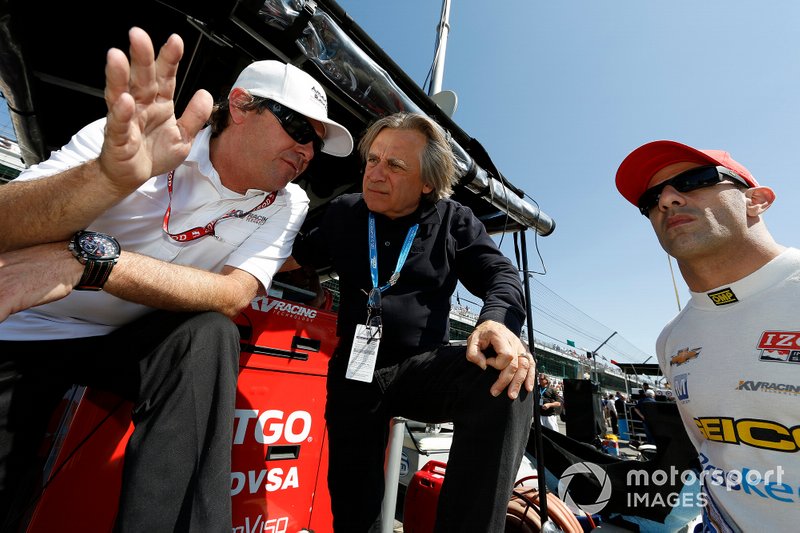