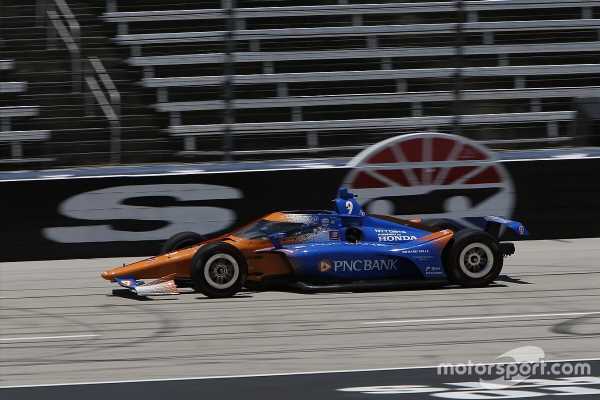 Scott Dixon won IndyCar’s Genesys 300 as his Chip Ganassi Racing-Honda’s pace around Texas Motor Speedway on the long runs was far superior to that of his primary rivals from Penske, while teammate Felix Rosenqvist emerged as his closest challenger before crashing.

Penske-Chevrolet’s polesitter Josef Newgarden got the jump on Dixon at the start of the race with a second Penske of Simon Pagenaud third, but late dramas in getting fired up – electrics were prime suspect – obliged Andretti Autosport’s Ryan Hunter-Reay and Alexander Rossi to not only start from the back but also serve a drive through penalty.

Thus their teammate Zach Veach ran fourth ahead of fast-starting Ganassi driver Rosenqvist and similarly impressive new AJ Foyt Racing pilot Charlie Kimball got the jump on the third Penske of Will Power. Graham Rahal was another Top 10 starter in trouble, obliged to pit during the warm-up laps. In fact it was a disaster for the Rahal Letterman Lanigan Racing team as Takuma Sato’s car hadn’t made it through tech in time to hit the grid following his shunt in qualifying.

After 20 laps, Newgarden, Dixon and Pagenaud were running within 1sec of each other and had pulled 3sec on fourth-placed Veach. However, apparently unable to close on Jack Harvey’s Meyer Shank Racing-Honda to lap it, Newgarden soon had Dixon and Pagenaud closing on him.

Finally on Lap 32, Dixon decisively passed the reigning champion’s Penske to take the lead, and Newgarden pitted with a “bad vibration” to his right rear. Soon the others would have to pit too, given the stipulation of 35-lap stint length (green flag laps) due to the unknown effects of the aeroscreen weight on the 2019 tires.

The Ganassi team got Dixon out comfortably ahead of Newgarden and Pagenaud, but the pack was condensed almost immediately by a caution flag as for the second time in eight hours, rookie Rinus VeeKay struck the wall with his Ed Carpenter Racing-Chevy, and bounced back down the track into fellow newbie Alex Palou in the Dale Coyne Racing with Team Goh car.

The Lap 48 restart saw Dixon getting the jump on Newgarden, as Power passed Veach while Rosenqvist passed the pair of them. Right behind Veach ran Kimball and Marco Andretti, with Ed Carpenter and the Carlin car of Conor Daly completing the Top 10.

Dixon checked out at the front, swiftly pulling a 2.5sec margin over Newgarden who appeared to be struggling to hold off Pagenaud and Rosenqvist. Another Penske driver apparently facing issues was Power in fifth who fell four seconds off Rosenqvist and struggled to keep Veach in his mirrors.

Newgarden rode out his issue, and although he dropped 4sec behind Dixon when he again complained about tire issues, Pagenaud had fallen 3sec down.

By Lap 72, Dixon was 7.7sec ahead of Newgarden who was 4.5sec ahead of the Pagenaud vs Rosenqvist battle for third which went the Swede’s way on Lap 75 of the 200-lap race. Pagenaud, too, was now complaining of tire vibrations. Next time by, however, there was a caution for debris, and when the pits opened on Lap 80, all the front runners headed down pitroad.

Penske’s Newgarden got away ahead of Dixon who was also edged by teammate Rosenqvist, but the stop was a disaster for Power who was waved out before the right-rear tire changer had finished tightening the wheelnut. He was dragged back to finish the job but resumed the race in 16th.

Up front for the restart on Lap 87, Newgarden would lead Rosenqvist, Dixon, Pagenaud, Veach, Kimball, Carpenter and a trio of Andretti Autosport cars – Colton Herta, Marco Andretti and James Hinchcliffe. Dixon immediately went around the outside of Rosenqvist. It took him only another four laps to demote Newgarden and retake the lead.

Past half-distance, Dixon was once more looking dominant with a 4sec lead over Newgarden who had the other Ganassi car filling his rear mirrors. By lap 112 that lead was 6.6sec, and behind fourth placed Pagenaud was a chain of cars including Veach, Kimball, Carpenter and Andretti.

Rosenqvist finally passed Newgarden for second on Lap 118, while Herta ducked out of the Top 10 to pit slightly early, and Newgarden came in two laps later. Dixon only gave it one more lap, exiting his pitbox just in time to avoid getting struck by an incoming Pagenaud.

He resumed still 8.5sec ahead of Rosenqvist and Pagenaud who had beaten Newgarden on the pitstop exchange, and soon the reigning champion and defending Texas winner also fell behind the highly impressive Kimball and Veach. Next in his mirrors was his former Indy Lights teammate Daly, doing a fabulous job for Carlin.

Dixon’s struggle to lap Power’s 16th placed Penske backed him up to teammate Rosenqvist, but the Swede was 12sec in front of Pagenaud who had Kimball closely tracking him.

Herta and Newgarden were the first of the front runners to stop again, and following the full exchange – which saw Ferrucci’s DCR with Vasser Sullivan car lose a right-rear – Dixon continued out front ahead of Rosenqvist, while Newgarden had been jumped back into third ahead of Veach, Carpenter and Daly. Pagenaud and Kimball, meanwhile, had dropped to seventh and eighth.

With 30 laps to go, Rosenqvist had closed to within a second of Dixon who was struggling to lap backmarkers. Before the pitstop, it had been Power, now it was Andretti who was running 14th. Thirteen seconds in arrears, Newgarden was working hard to try and hold off Veach and Carpenter until giving up and pitting on Lap 181.

Rosenqvist pitted on Lap 186, Dixon two laps later after some very strong laps without being impeded by traffic. Felix, by contrast, had emerged into a sea of backmarkers, and in his anxiety to get around the outside of Hinchcliffe and close on the five-time champion, he drifted high and struck the wall.

The final shootout starting Lap 197 would see Dixon leading Pagenaud, Newgarden, Carpenter, Veach, Daly and Herta. Helping Dixon’s cause was having lapped cars behind him, and he duly laid it down in perfect style to score his 47th win, and fourth at Texas Motor Speedway, but first with new race engineer Michael Cannon.

Pagenaud and Newgarden filled out the podium, while Veach matched his best ever finish with fourth by holding off Carpenter, Daly and Herta. Hunter-Reay climbed from two laps down to clinch eighth ahead of Oliver Askew in the Arrow McLaren SP-Chevy.