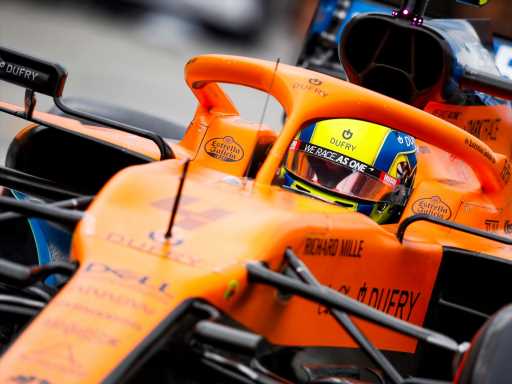 Lando Norris admitted he fears engine penalties this season after his new power unit failed and forced him to retire from the Eifel Grand Prix.

The McLaren driver was on course to finish P4 and potentially challenge for a podium finish when he reported a loss of power over the team radio and began to drop down the order.

Eventually, the engine gave up completely and Norris had to park at the side of the Nurburgring track, bringing out the safety car in a race won by Lewis Hamilton.

Having had his third Renault engine of the year fitted before this race, and with three the maximum allowed for the year, Norris now faces the prospect of a grid penalty if a fourth has to be used.

“It’s a concern, not ideal obviously,” said Norris. “I’m not sure what the damage is yet, especially after the final part when it shut down completely, so we’ll have to wait and see and figure it out.

“But it doesn’t put us in a good position, especially after having to change the power unit and now potentially doing my third. So Germany isn’t treating me very nicely this weekend. But it’s not something I can control.”

Norris thought that even with the loss of power, he may have been able to hang on to collect some points before having to retire.

Lando Norris retires after battling car troubles for the majority of the race#EifelGP 🇩🇪 #F1 pic.twitter.com/jWVVH92TuJ

“Today wasn’t our day in any way really,” he said. “The first quarter was really good – good opening lap, good pace and then it all started to go very wrong.

“We kept fighting, we had the problems around lap 20, 25 and found some ways of managing it but it was very difficult. I was having to press buttons and do things on every straight on every lap.

“So it was very tricky and took a lot of focus away, making sure I had to do these, but we were still up for some points at the time so there was potential to still be in the top 10 until it went completely and it was no more.

“I was on for a definite P4 pretty much and hopefully fighting [Daniel] Ricciardo for P3. We tried everything we could but it was out of our control today.”

After getting out of his car, Norris did a ‘Fernando Alonso’ from the 2015 Brazilian Grand Prix and sat in a marshals’ plastic chair by the side of the track for a few moments.

Asked what was going through his mind, he replied: “Just a lot of hard work that goes into it from the team and myself and so quickly it’s gone. We could have still salvaged something out of it if it didn’t go completely.

“I looked at my poor car and they were spraying it with extinguisher. It was just a white car in the end. ‘It’s beginning to look a lot like Christmas’, that’s all I thought!”