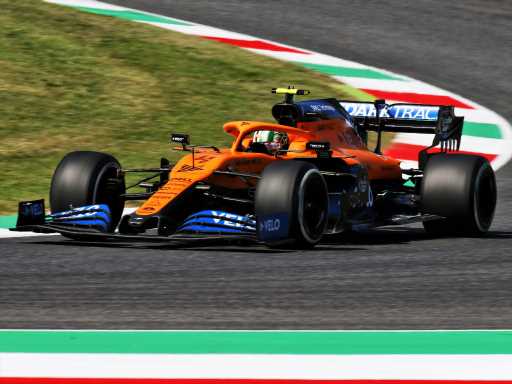 Lando Norris admitted to being “lucky” after crashing during FP2 at Mugello, but he’s glad to be racing at a track with gravel.


The McLaren driver would dip a wheel into the travel at the exit of Poggiosecco, sending him into a high-speed spin.

Fortunately the angle which he went into the wall left him with only a broken front wing, though the Briton did say that the crash was worse than how it looked on TV.

That being said, he knows he was pretty “lucky” to have suffered what ended up being only a minor accident.

“It felt a lot worse when I was in the car than what it looks like,” Norris told Sky F1.

“I think there is some damage a bit to the steering and maybe the rear, but nothing major luckily. I don’t think I damaged too much the floor or the wings, apart from the front wing obviously.

“It’s not terrible, it could have been worse, so I’m lucky. But it was a small mistake from my side which was quite costly, cost me all of the high-fuel running in FP2.

“It is what it is, and I need to try and make up for it tomorrow.”

And even though the gravel contributed greatly to his crash, Norris said he prefers to be racing at tracks with gravel traps.

“As much as I hate there was gravel, because of ending up crashing and damaging the car, it’s better like this,” he admitted.

“I think it’s more tricky, but it’s more challenging, and I think that’s what it should be like.”

🏁 The chequered flag waves on FP2 in Mugello. 🏁

Norris also said that the “slippery” tarmac at Mugello was making it hard for drivers and mechanics alike to find the best setups for their cars.

“The tarmac here seems very slippery, so a lot of people are struggling and so are we. We were expecting to be quite a bit quicker than what we are doing, just because we were expecting the track to be much grippier.

“It feels quite slippery with the tyres we have, and it makes our life very difficult in the car and for the mechanics and engineers to set up the car.