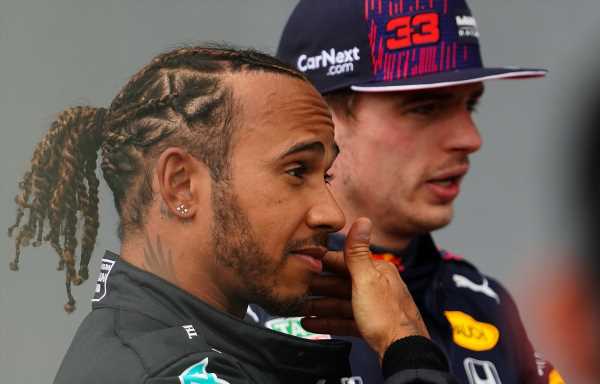 With his team-mate down in P8 on the Imola start grid, Lewis Hamilton concedes Red Bull have a “better set of cards in terms of strategy”.

Although Hamilton did his part in qualifying for the Emilia Romagna Grand Prix, putting in a 1:14.411 to take pole position, his team-mate Bottas was left feeling “a bit confused” by his lack of pace.

One driver who certainly wasn’t confused was Sergio Perez, the new Red Bull signing qualifying in a career-best P2 with his team-mate Max Verstappen third.

With the two Red Bulls starting upfront with Hamilton, the Brit is well aware that he’s about to have to defend against a two-pronged attack.

But two against one is a challenge that Hamilton says he’s ready for.

“If we’re able to get off in order, then they obviously have a bit of a better set of cards in terms of strategy,” the seven-time F1 Champion told Autosport.

“But that doesn’t mean we can’t pull out something unique and do something different.

“I’m not really sure what happened with Valtteri.

“It’s very hard to overtake here so obviously we probably won’t have the support of him early on, but nevertheless maybe he will make it through.

“But otherwise we’ve just got to focus on our job and try and do absolutely everything and more to keep these lads behind.”

Red Bull team boss Christian Horner is looking forward to finally being able to play the strategy game against Mercedes, rather than being on the receiving end.

Red Bull have their two drivers starting on different tyres with Perez on the soft Pirellis and Verstappen on the mediums, same as Hamilton.

“We’re in a good position and with both drivers on alternative strategies, we’ve got a few options which we’ll work on to bring home the best possible result,” he said.

“It should make for an exciting grand prix.”

But while Toto Wolff is wary about his team’s chances on Sunday, “the material we have now is not at the level of Red Bull”, he believes in Hamilton he has a driver who can still pull off the win.

“He makes the difference and no mistakes,” said the Mercedes motorsport boss. “Getting to the core with a lesser car is what sets him apart from the rest.”