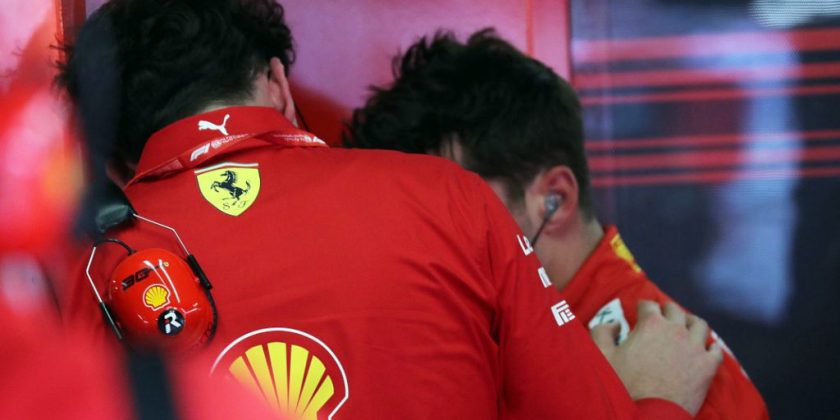 Criticised for throwing away an opportunity for Charles Leclerc to close the gap in the title fight, Mattia Binotto has hit back – saying Ferrari made the “right” call, the “proper one”.

Ferrari were again accused by pundits and fans alike of botching Leclerc’s strategy at the British Grand Prix, and it was not the first time such comments have been aimed at the Scuderia.

The Monégasque driver, who lined up on the grid 49 points behind Max Verstappen, was leading the race when there was a late Safety Car for Esteban Ocon’s stricken Alpine.

While the drivers behind him, including his team-mate Carlos Sainz, pitted for brand new soft tyres, Ferrari left Leclerc out on 16-lap-old hard tyres.

He did not even finish on the podium, P4 while Sainz took the win, with Binotto criticised in the foreign press for dropping the ball.

Asked to respond to his critics, the Italian told ESPN: “What would they have done differently?

“I think the decision we took was the right one, the proper one, each single time. Should we have stopped at the Safety Car is maybe the only one we are questioning, I think.

“If we would have stopped him, maybe the others would have stayed out and he would have maybe been fourth on soft tyres. On the other side, would he have been able to recover the position? Not sure.

“I think obviously with hindsight it’s easy to say we could have done [something] differently. Again, we have a Safety Car at the wrong moment when we are leading the race comfortably.”

Leclerc has spoken of his “disappointment” at being left out on track, saying he was told to “stay out” by Ferrari’s strategist.

He added: “For me it wasn’t the right decision, but it’s like this.”

“What happened was our two cars were too close to stop both of them, so we had to take a decision [on which one to stop],” he said.

“We were the only one with two cars fighting for the good positions, the other teams had one car and certainly the decisions are a lot easier.

“In our case, we had the two cars and there was not a sufficient gap to stop both of them because the second would have lost time at the pit-stop and fallen back.

“And Carlos by stopping and still being second, he would have stopped the others, at least in the first couple of corners when we knew starting on the hards would be the most difficult. So that was the reason we decided.

“And then we were hoping for more tyre degradation on the softs to give Charles maybe a difficult three or four laps initially but recovering later on, but the softs didn’t degrade as we were hoping.”

Scoring just 12 points on Sunday, Leclerc is 43 behind Verstappen, who was P7 after his RB18 suffered damage.