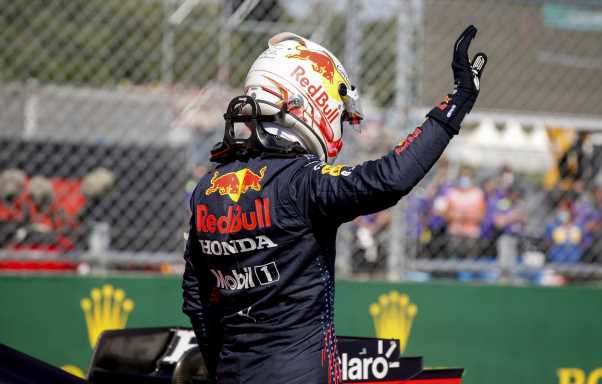 Despite losing the lead in the Drivers’ Championship, Max Verstappen isn’t disheartened as he is “absolutely sure” he is faster than Lewis Hamilton.

He left eight points ahead of the Mercedes driver after a crash on the opening lap meant he retired for only the second time this season.

Determined to bounce back in Hungary and put the Silverstone drama behind him, Verstappen instead “again taken out by a Mercedes”, this time Valtteri Bottas.

The Finn got it horribly wrong at Turn 1 on the opening lap, causing a multi-car crash that badly damaged Verstappen’s RB16B.

Running in a car with “less downforce” than a Haas, he could only manage P9 on the day while Hamilton brought his Mercedes home in second place to take an eight-point lead in the standings.

Verstappen says he’ll bounce back, after all he is “absolutely sure” he’s the faster of the two title rivals.

“I’m sure we can make it an exciting battle,” the 23-year-old told De Telegraaf.

“We still have a good chance of winning and should not suddenly give up.

“I see it this way: I can still go faster than anyone in a car. There is also something in it.

“I am absolutely sure that I am faster than Lewis.

“For me it works very well to think like that. If I didn’t think so, I’d be better off staying at home.”

Two tough results to end part one of 2021 🏁 The Bulls will return 🔜 pic.twitter.com/U9AAqZki7H

This year Verstappen has the package in his Honda-powered Red Bull to challenge Mercedes and Hamilton.

But while Red Bull had the better straightline speed in recent races, Mercedes clawed back some of the deficit in Hungary with reports saying they were 5km/h faster on the straights.

Verstappen says it is up to him to make up the difference.

“I think the cars were certainly equal earlier this year,” he said. “Now Mercedes is back on track and we have to ensure that we straighten it at least. Then I can make the difference.

“It is now up to us to keep working to find just that one or two tenths that they have taken back during this season.

“Look, Mercedes was so dominant in the years before so in that regard we are in much better shape this season.

“Of course also helped a bit because the rules have changed slightly this year. But we will have to see what we can still get out of the car.”