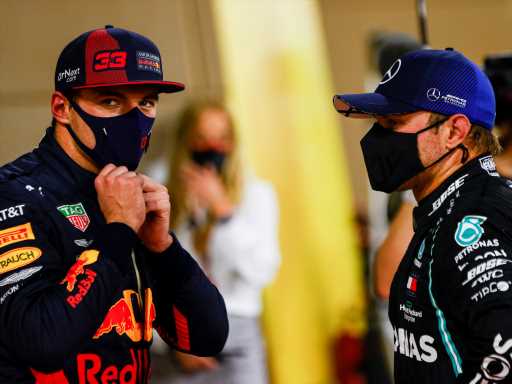 Max Verstappen says Mercedes have usually stepped up their performance on race days in 2020, so feels the Sakhir GP could be the same.

Around the fast sub-minute Outer Circuit in Bahrain the top three of Valtteri Bottas, George Russell and Verstappen were separated by less than a tenth of a second at the end of qualifying.

P3 is a familiar position for Verstappen, but it’s rare that he is only 0.056s off the Mercedes on pole.

That being said, he never really thought pole for the Sakhir Grand Prix was possible.

“I was very close yes, but I think at the end third is fine,” he told reporters in Bahrain.

“I never thought we could really go for pole but I’m of course happy that we were that close.

“But also I think you have to look at Valtteri he had no tow in his final run, so that of course costs you a bit, so the gap I think realistically is a little bigger.

“It’s fine margins, but for us overall on a track like this with a lot of straights we can be pleased with this.”

Verstappen hopes that starting on the cleaner side of the Bahrain International Circuit and with softer tyres than the Mercedes duo of Bottas and Russell will give him an advantage off the line.

“I think it will be a little bit nicer, last week third for me seemed a little bit better than second in that second start,” he explained.

“And of course I’m on a softer compound so I hope that will help me as well.”

It was very close 🤏 I’m pleased with P3, we had a good qualifying. It will be interesting how the race will play out, let’s have some fun tomorrow 💪 #KeepPushing #SakhirGP 🇧🇭 pic.twitter.com/CKyhW2zyuV

But as for overall race pace, Verstappen is prepared for Mercedes to step up their game on Sunday as they have traditionally done this season.

“We’ve had a few Fridays where it looked pretty good and then on Sundays it seems like Mercedes have almost been hiding a little bit and then they would step it up,” said the Dutchman.

“So we have to wait until tomorrow [to see] how competitive we are, I have good hopes that it’s going to be an exciting race.”

Asked whether Red Bull will favour saving the tyres or going full attack in the Sakhir GP, Verstappen replied: “It’s a bit of both I think, you have to look after [the tyres], but of course whatever we do we will not be very quick on the straights anyway.

“We just try to of course maximise everything we can in terms of lap times and tyre deg at the end.”