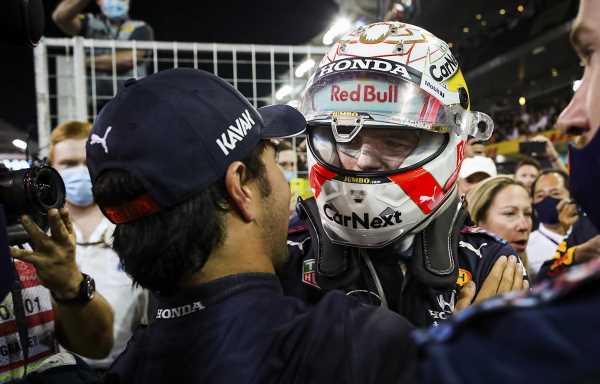 Max Verstappen is understandably full of praise for team-mate Sergio Perez given the role he has played in helping him win the World Championship title.

The arrival of Perez ahead of the 2021 season represented a change in direction by Red Bull, who made a very rare foray outside of their own driver programme to bring in an experienced driver with no previous ties to the team.

That decision, you have to say, has been more than justified. Even though Perez has not operated on the same level as the World Champion, he still provided a lot more support than previous team-mates of Verstappen and that was crystallised through the Mexican’s fierce defence against Lewis Hamilton in the season finale at Abu Dhabi.

That hold-up job played a role, albeit a minor one given Race Control would go on to manufacture a one-lap showdown between Hamilton and Verstappen following Nicholas Latifi’s crash, in keeping Verstappen within touch of his title rival.

It was duly recognised and appreciated by Verstappen, who labelled Perez “a legend” on team radio. And, since the final race, the praise has not stopped there.

All fun and games at the end-of-season photo 📸 😁

“I never thought he would be this awesome,” Verstappen said, as quoted by GrandPx.news.

“Previously I only knew him as a driver, but now that I have spent a little more time with him I have noticed that he is really a top guy.”

All the stats suggest is Perez is a clear number two driver at Red Bull, but Verstappen does not want to categorise him as such.

“I don’t like to put it that way,” Verstappen added.

“In the end, we have the same chances.

“You have to be respected, of course, but I don’t want to be favoured. I don’t think I need that either and in the end it’s not good for the team if it’s that way all of the time.”

Perez clearly made a good impression on the Red Bull bosses long before Abu Dhabi, having signed a one-year extension back in August with the team to see him through until at least the end of the 2022 campaign.