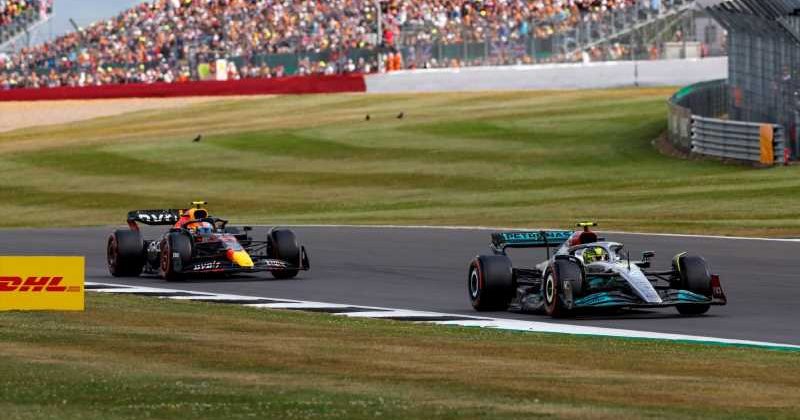 Mercedes have illustrated their recent progress by saying they are no longer merely “fighting to survive” with the W13.

A disappointing first half of the season for the eight-time consecutive Constructors’ champions has featured several low points, in particular Lewis Hamilton being unable to even reach Q2 at the Saudi Arabian Grand Prix.

But as they have continued to learn about their all-new car, which has been among the worst examples of the porpoising effect so prevalent in the new ground-effect challengers, things have started to pick up for Mercedes.

Rather than collecting podium finishes as a result of mishaps for rival teams, they are now starting to gain them entirely on merit – and Hamilton looked fastest of all for parts of the British Grand Prix before eventually finishing third, helped by an update to the car.

Picking up that extra point 💪 Fastest lap on Sunday went to @LewisHamilton – the 60th of his career 🔥 pic.twitter.com/xH3stSVUKA

“And the drivers were fighting to survive with a car that was incredibly difficult to work with.

“But we did a decent job of scoring points, actually, and picking up on opportunities when others were unreliable.”

The first time there looked to be tangible improvement from Mercedes was at the Spanish Grand Prix, to which they took an upgrade with George Russell and Hamilton finishing third and fifth respectively.

“Barcelona was useful for us because we had something that wasn’t bouncing around on every circuit we went to,” added Shovlin.

“But then a run of three street tracks highlighted another weakness and to be honest, we are just going through it – looking for the problems, and then we will try to apply our engineering skills to solving them.

“I would say the route we want to take now is becoming increasingly clear, and that’s encouraging from a development point of view.

“This [Silverstone] update is the first one along the line we started to create in Barcelona.”

Although the W13 is not visibly so different from when it first appeared with its zero-pod design, Shovlin still feels significant changes have been made.

“In terms of the concept of the car, we’ve actually changed our car an awful lot since it first ran,” said the 48-year-old.

“It’s behaving very, very differently to when it first ran. Even though if you look at it from a distance it looks quite similar to what we had at round one aerodynamically, it’s quite a different beast now.

“We changed concept in Barcelona perhaps in terms of the way the car was working, to try and solve some of that bouncing.

“And while our issues with bouncing, quite rightly, generated a lot of interest in the early races because we were at the worst end of the pack, if you look at us here (at Silverstone) I think we are actually near the better end of it.

“We are certainly not the best but a long way from being the worst. So I think we have made progress. What we are left with is a car that’s a bit stiffer than we’d like but certainly a car we can start to work with.”