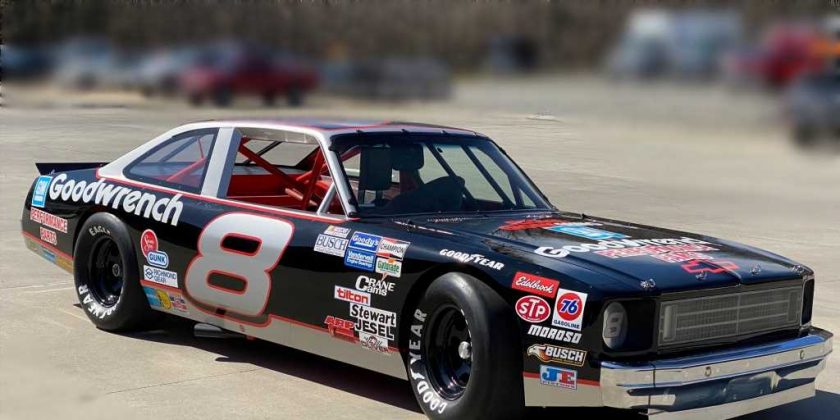 For almost two years, Dale Earnhardt Jr. has been working to restore a vintage Chevrolet Nova that his father raced in the Busch Grand National Series back in the 1980s.

He acquired it in April 2019 and took it for its first public drive on the back roads that lead to the JR Motorsports shop last week. The car is being restored in advanced of NASCAR Throwback Weekend on May 7-9 at Darlington Raceway.

Earnhardt plans on leading the pace laps with the car in the moments leading up to the May 8 NASCAR Xfinity Series event. Dale Earnhardt Sr. was a three-time Darlington winner in Busch Grand National Series and twice drove a GM Goodwrench No. 8 to Victory Lane in what eventually became the Xfinity Series.

During an episode of the Dale Jr. Download podcast in April 2019, Earnhardt revealed that he found the 1984 Goodrich No. 8 car. It was initially a Pontiac Ventura before the nose was cut off as part of its transition into a Nova.

Before it landed with Earnhardt, it was used in a variety of vintage races and took part in the Goodwood Festival of Speed.

Earnhardt bought the car in 2019 at an auction with help from Hendrick Motorsports owner Rick Hendrick for $190,000. At first, he wasn’t totally sure if the car was actually one his father drove. He received his first proof upon finding visual evidence of hammer pounding marks on the floorboard – a frequent Earnhardt tactic to lower his driving seat.

Here is the photo discussed from 1986 for context. pic.twitter.com/BLDAuDxJs9

Using several photographs from 1986, Earnhardt was able to authenticate the car by finding the same uneven holes that his father drilled into the car before taking a picture of his young son.

Even after restoring it, there was still minor work to be done before he could take the car back to a Cup track for some demonstration laps — something he plans to do at Charlotte Motor Speedway.

“We needed to make sure the car was set-up, meaning the rear end housing was in it straight with the right camber and castor and toe setting and everything like that — just so it drives like it’s supposed to and looks good doing it,” Earnhardt said.

Earnhardt said it was surprising to him how easy it was to set the car up.

“The rear end doesn’t have any adjustments in the trailing arms,” Earnhardt said. “They bolt right in. There’s no shimming them one way or the other, which is what a lot of cars have today. They just bolt right in so it’s either too far to the left or too far to the right. You just adjust the track car to get it straight. …

“And then we went to the front, and the castor and the camber, we had to make two shim changes to get that right. We set the tow and measured the tread width. We went longer on the left side because you want the left side to get to the corner first. So, it’s about a quarter or half inch further to the left just like it’s supposed to be. All that was automatic and fell into place. We secured all the heim joints and suspension components to make sure nothing falls off.”

So, it’s off the Charlotte and then Darlington … but not without a joyride in Mooresville, first.