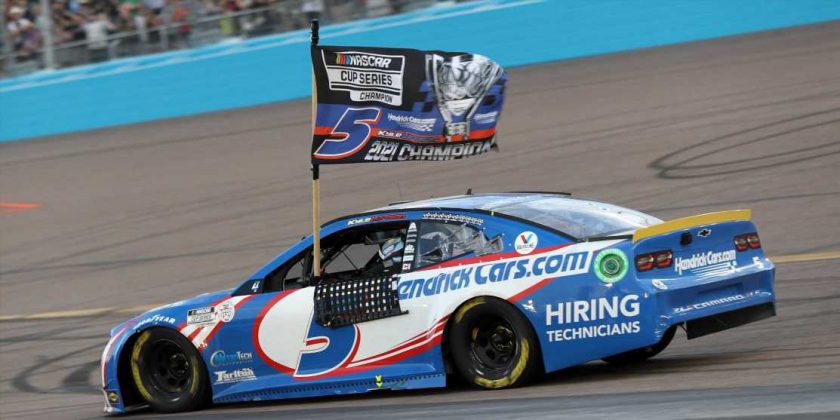 Does anyone else—other than a few cynical disbelievers, that is—have anything snippy to say about driver Kyle Larson and crew chief Cliff Daniels and team owner Rick Hendrick in light of the NASCAR Cup Series championship they won Sunday near Phoenix?

Any comments about Larson not deserving of another top-drawer NASCAR ride after being suspended most of the 2020 season for uttering a reprehensible racial slur during the broadcast of an on-line race in April of last year?

Any acknowledgement that while Daniels couldn’t get it done with seven-time champion Jimmie Johnson last year, he suddenly morphs into Chad Knaus-2 in the just-completed season? Surely someone must look suspiciously at this year’s 10-victory performance for Larson and Co. and wonder how many inspection issues were overlooked?

And almost certainly someone wants to carp that while Hendrick was smart enough to sign Larson in the fall of 2020, it’s almost unfair that he’s the only owner rich enough to self-sponsor the No. 5 Chevrolet team through one of the best seasons in recent memory.

“Eighteen months ago, I didn’t think I was ever going to be in a Cup car again,” Larson said after winning the season-finale and its accompanying championship at Phoenix Raceway. “Strapping in for the Daytona 500 (in February) didn’t even seem real, let alone winning the championship. I’m very fortunate.

“It’s definitely been a journey, a roller coaster. But I’m very thankful for my second chance and every opportunity I’ve been given these last 18 months. Life is crazy, and you’ve got to stay positive through it all. Hopefully, everything will work out.”

Larson’s stock-car career was promising but not glory-bound during his six full seasons (2014-2019) with Chip Ganassi Racing. A well-respected dirt-track star throughout his teen years, Larson offered himself to every Cup owner in 2011-2012, looking for a ride. After a brief conversation, Ganassi hired him to drive his No. 42 Chevrolet for 2014 and beyond.

“Chip Ganassi is the sole reason I’m here today,” Larson said Sunday night. “There’s been a lot of people. Rick Hendrick has obviously been a big part of this, too. I met with every team owner (while still concentrating on a sprint car career) and Chip was the only guy, the only team owner to even entertain me racing his car. I met with him for probably 20 minutes, and he signed me up. I owe the world to him. I’m very thankful for all the years I spent at Chip Ganassi Racing.”

They won six races together: Michigan in 2016, Fontana, twice at Michigan, and Richmond in 2017, and Dover in 2019. But Larson’s world came tumbling down —as the Dixie Chicks sang in “Not Ready To Make Nice”—with his eight-month NASCAR suspension for using the n-word early in 2020. With new Hendrick assistant Jeff Gordon providing positive input and a seat available, Hendrick hired Larson in the fall of last year and paired him with Daniels.

None of them envisioned the kind of comeback season they’d get: 10 points-paying victories, the non-points All-Star victory, a pair of three-race winning streaks, a record 2,581 laps led, the regular-season championship, five victories in 10 playoff races, 18 podium finishes, and the championship. 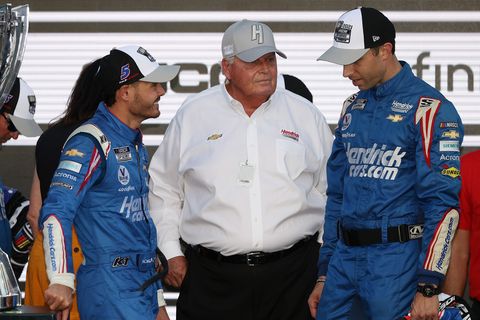 Larson didn’t allow himself to dream such an unlikely scenario. After all, there were times during his exile when the 29-year-old Californian realized that while he’d probably eventually return to Cup, he worried that winning owners and high-profile sponsors would keep their distance.

“I dream about stuff I know I can do,” Larson said. “I’m not sure I ever really thought I could win a Cup Series championship. I’ve always thought about winning races, not championships. It’s just so far out there I never thought I would do it. With Chase winning it last year, I knew we would be strong, but I didn’t think we’d ever win double-digit races. Not that, and winning the championship and winning half the playoff races.

“For sure, until I got with this team, that is. Early in the year I felt we could do it, but then you think about how the (16-driver playoff series and final four) format is and you’re like, ‘well, something is going to happen where I don’t win this championship.’ Maybe that’s what kept it out of my dreams a little bit, too… all the circumstances that go into winning a championship in Cup.

“It’s like any other form of racing, a year-long thing. You can work your way towards winning a championship with this format, but it’s just crazy. I think that’s kind of what’s kept it from me dreaming about these moments and how I would see it.”

But all’s well that … well, you know.

By all accounts, Larson has redeemed his racial insensitivity by working closely with several social diversity groups that emphasize forgiveness and self-awareness. Who knows a man’s deepest heart, but for now Larson seems to have healed himself.

Daniels has emerged as NASCAR’s newest wunderkind crew chief, a bright, mechanically gifted, follow-at-all-costs leader. Granted, he and Johnson seldom finished as well as they ran in their partial 2019 and full 2020 seasons together, but through it all Daniels made himself a smarter and more prepared crew chief every weekend.

And Hendrick has proved (again) that he and his people have an eye for extraordinary talent—Tim Richmond, Gordon, Johnson, and Larson—and a knack for creating just the right human chemistry. After 15 Cup titles, why should anyone doubt him?

How I ended up buying a BMW 330i M Sport: Delivered within 2 weeks