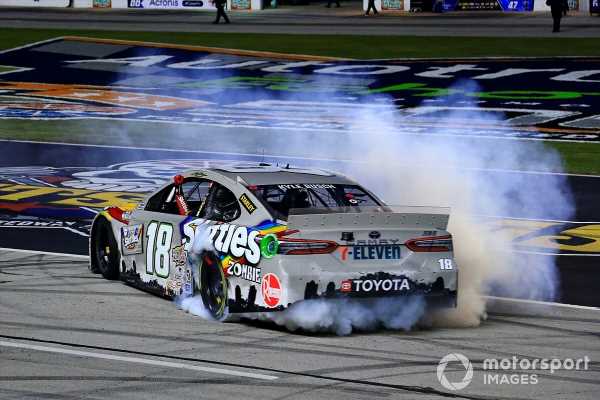 Continuing his winning streak in the NASCAR Cup Series was very important to Kyle Busch but it may not be enough to keep the his No. 18 Joe Gibbs Racing team intact next season.

Busch, with the help of his crew chief, Adam Stevens, was able to stretch his fuel the final 66 laps in Wednesday’s rain-delayed race at Texas Motor Speedway and remain out front to claim the victory.

Busch has now won at least once in all 16 of his fulltime seasons in the Cup series.

After the race, Stevens said he didn’t know if he would remain in his current role in 2021, only that he would be working at JGR.

“We haven’t really had those discussions. You know, I’m sure that we will have those type of discussions in the near future and see how it plays out,” Steven said.

“I know that I have a home at Joe Gibbs Racing and that’s most important, but this is a performance business, and we need a lot more nights like tonight, a lot more like what we’re used to having.

“We’ll have those conversations here shortly I’m sure.”

Dealing with a winless season

Stevens was asked to describe how it has been going through this season while Busch remained winless and then took an early exit from the playoffs, unable to defend his championship from a year ago.

“It hasn’t been a lot of fun, to be honest with you. It just seems like whenever we do have a good car or have a chance to be in the mix, we just haven’t been able to capitalize at all, just issues on top of issues, and after a while it’ll wear you down, knowing that the potential of the team is always there,” he said.

“We’ve certainly had some bad runs, but we haven’t had as many as the record would show. We’ve had a lot of DNFs for various reasons, and just when we get those good cars, we just haven’t been able to capitalize, and just an odd year in that regard.

“You don’t want to break a streak like KB has got going, certainly not on my watch. And especially when we have all the tools to do what we need to do and have been so close so many times. It’s nice to finally kind of dot that ‘I’ and cross that ‘T’ and make it happen.”

Statistically, it’s been an uncharacteristic year for Busch and his No. 18 team.

Asked if he’s doubted himself or his relationship with Busch this season, Adams said: “There are things that you think about certainly when you’re not performing at the level that you expect yourself to perform and expect your team to perform, and you question those things.

“I think it’s a little bit easier to swallow, you just have to keep your wits about you and keep focused on doing the right stuff.”