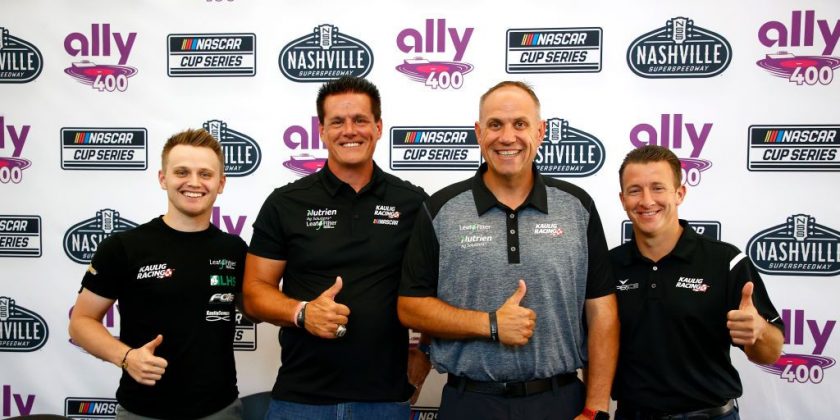 ‘Round and ’round the NASCAR Silly Season carousel goes and where it stops, nobody knows.

Kaulig Motorsports revealed on Friday at Nashville Superspeedway that it had acquired two ownership charters for the 2022 Cup Series season. This was generally surprising news to one of the team owners currently leasing one of them.

The team owned by Xfinity Series contenders Matt Kaulig will expand to Cup in 2022 fielding two full-time cars. One of the cars will be driven by Justin Haley and the other will be split between multiple drivers including AJ Allmendinger.

Kaulig obtained the charters from Spire Motorsports, which currently fields two Cup Series cars for Haley and Corey Lajoie. The organization also owns a third charter, which is currently leased out to Trackhouse Motorsports for the No. 99 team and driver Daniel Suarez, and that was one of the sold charters.

Ownership charters permit the holder automatic entry into every Cup Series event and provides increased financial benefits. However, they can only be leased out to another organization once every five-year period.

In other words, Spire Motorsports needed to operate what is currently the Trackhouse No. 99 charter themselves in 2022 or be required to outright sale it if unable. Of course, the team could have chosen to lease its No. 77 charter but opted to retain one charter to continue fielding a full-time chartered entry for Lajoie.

I learned about this deal when everyone else did today https://t.co/FRX8W314SN

In any case, Trackhouse team owner Justin Marks wasn’t notified of Spire’s transaction with Kaulig until it was revealed to the public on Friday — notable because Marks has expressed a desire to purchase at least one charter before next season and either lease or purchase another to expand his team.

Without a charter, Marks would have to field the team without the protections and benefits that come with the franchise model — which includes a significant portion of the purse.

Meanwhile, Friday’s announcement was the culmination of three years worth of effort from Kaulig and team president Chris Rice, who have both aspired to take this step from the moment their Xfinity Series team started to contend for wins.

“As you guys know, there’s so many people that (have been) hunting charters over the last year or so, and we got two of them, so Chris Rice did an unbelievable job heading that up.”

One of the three charters owned by Spire Motorsports this year is actually held by Braun, who acquired what is now the No. 7 charter from Furniture Row Motorsports, when that now-defunct organization sold its No. 77 team before the 2018 season.

Braun had taken that charter to JTG Daugherty Motorsports and linked it to the No. 37 over the past three years until it was brought to Spire this past winter — which is why Ryan Preece is currently entering events as a non-chartered driver.

No doubt, Braun was instrumental in making this agreement materialize and Rice recognized him during the press conference at Nashville.

“I’m glad the cat’s out of the bag,” Rice said. “It took a lot of people to make this happen (and) a lot of friends. You see Todd standing over here. A lot of people behind us have been with us (and) have put a lot of effort to us to be able to get these two charters.

“We’re really excited to be able to have two charters.”

With the Next-Gen car looming on the horizon, set to debut in February in advance of the Daytona 500, there are no shortage of teams looking to break into Cup Series ownership.

The car is a de facto kit car, designed in part, to reduce the costs to compete at the highest level over the next decade and beyond. It also aims to encourage other manufacturers to join Chevrolet, Ford and Toyota once the parameters of a hybrid engine formula are established by the sanctioning body.

In addition to Kaulig, GMS Racing has also confirmed its arrival as a Cup Series team next season but did not reveal the acquisition of an ownership charter. JR Motorsports has expressed interest in advancing to Cup next season. 23XI Racing is also seeking a second charter so it can become a two-car team.

Rice said Kaulig acquiring the two charters from Spire was a ‘very easy, straight to the point’ transaction. Kaulig did not reveal the price, but there have been reports that the price of a charter hovers around $10 million.

“I mean, it’s the price to play,” Kaulig said. “I mean, you have to pay to play. So, that’s just the way the system works.

“Hey, in the, in the NFL, you have to buy a franchise. If you want a team, you have to pay. So no, we’re not going to say how much but we’re very comfortable. We worked very well with Spire to make that happen. We’re, we’re very pleased with the outcome.”

Rice also has a hard time seeing other charters getting sold this year in advance of next season.

“If people sell charters, I’m going to be awfully surprised,” Rice said. “I’ll be dead honest with you. It’s very hard, but if they do that’s good. There may be a one or two that’s left out there or maybe even three, but man, that’s going to be …. let’s just say I don’t have much hair anyway.

“I’ll rub my head a lot. I don’t know who’s left that that would be willing to be able to let other owners come in.”