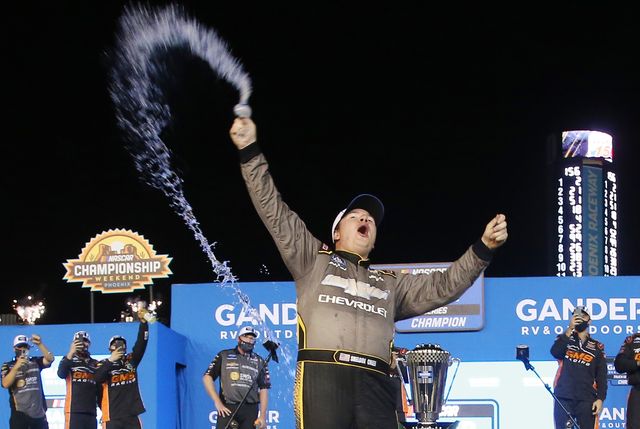 The NASCAR Truck Series championship was decided by a late restart, a crash in the back of the field and a decision to pit for tires in advance of a green-white-checkered finish.

That’s how Sheldon Creed won the Lucas Oil 150, and the championship, and ultimately how Brett Moffitt and Grant Enfinger lost it.

Moffitt was leading with a four second lead over Enfinger with three laps to go when Dawson Cram spun from the back half of the grid. Creed was running third at the time but was called down pit road by crew chief Jeff Stankiewicz.

Moffitt and Enfinger stayed out.

“I pride myself on my restarts week-in and week-out,” Creed said on FS1 after his win. “And just nailed the restart right there.”

Meanwhile, Zane Smith led the first 48 laps, and also pitted during the final caution but couldn’t replicate Creed’s restart, and could only get to second by the final corner of the final lap, finishing just under a second behind the leader.

He called it a “disgusting feeling” coming up short.

“I get to go do it all again next year,” Smith said. “So hopefully we’re one spot better.”

Moffitt led the most laps (78) and won the second stage and left Phoenix frustrated and with an uncertain future. He started the season as one of the expected championship favorites, but broke his legs in an ATV vehicle crash right before the pandemic began, never missing a race. He didn’t win his first race of the season until last month at Kansas.

Now he faces an uncertain future with no contract for next season.

“I don’t even know what I’m doing next year, so that’s that,” Moffitt said. “This year’s been hell on and off the racetrack. I don’t know. It’s been a tough year in my personal life with everything that happened. Having a bad year on track certainly doesn’t help that at all.

“Honestly, I’m just glad it’s over at this point.”

The first caution didn’t come until 45 laps to go, when Carson Hocevar struck the wall due to a flat tire. Enfinger had fallen behind the other three contenders and made a decision to pit for tires, the only chance they would have to win the race and the championship.

It got him to within four seconds of the lead with three to go, and he didn’t choose to take tires in advance of the final restart.

“We went back and forth,” Enfinger said about the possible decision to pit. (Crew chief Jeff) Hensley wanted me to come in. I wanted to stay out just because we had trouble firing off on new tires all night. My biggest hope was I should stay out and 10 trucks would stay out. That wasn’t the case. That’s where we got beat.

“I don’t know. We hopefully would have started in front of the 2 truck that last restart if we had taken tires. I don’t know. We just weren’t great at firing off all night. That’s one we might second‑guess a little bit for a while.

“Overall, just a bad ending to a great year.”

All four contenders had a shot at the championship throughout the course of the night, but ultimately, the restart caused by Cram’s spin set-up NASCAR’s signature bottom of the ninth Game 7 moment.

Creed led the series with five wins, and accumulated the third most points all season behind Moffitt and regular season champion Austin Hill who failed to make the final four due to an engine failure last weekend at Martinsville.