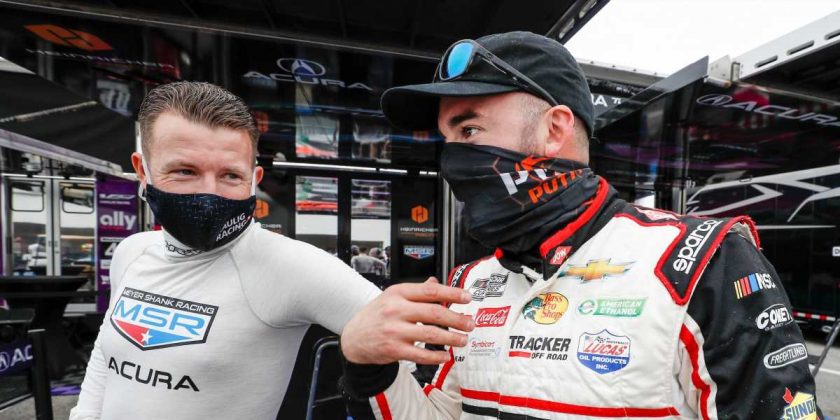 Of drivers with NASCAR connections taking part in this year’s IMSA Rolex 24 at Daytona, most of the attention leading up to the twice-around-the-clock race has been on defending NASCAR Cup champion Chase Elliott and his recently retired teammate at Hendrick Motorsports, Jimmie Johnson.

They are among five drivers with ties to NASCAR scattered among the field. One of those is Daytona 500 champion Austin Dillon. Dillon is entered in the No. 51 RWR-Eurasia ORECA in the LMP2 class. Dillon teams up with fellow NASCAR driver Cody Ware, along with drivers Salih Yoluc, a class winner in last year’s 24 Hours of Le Mans and Sven Muller a Porsche factory driver and a last-minute replacement for Mathieu Jaminet who tested positive for COVID-19.

Ware was in last year’s event, but for Dillon this weekend will mark his debut in IMSA and in the Rolex 24.

While some of the other drivers with NASCAR connections–namely Elliott, Johnson and A.J. Allmendinger–are getting more attention, Dillon has had no problem flying under the radar.

“Yeah. It’s kind of nice,” he said. “I’ve enjoyed the whole process here and we’re here for experience and laps and then I’ve had such a blast. I’d definitely be interested in coming back and trying it again next year. But we got this year in front of us first and we’ll see how that goes.”

He also pointed out something he noticed between him and the other drivers.

“All the European drivers have a little bit different body build than NASCAR guys,” Dillon joked.“So I understand where Jimmie (Johnson) has picked that up from, and these guys are really skinny with big forearms. So I got to start changing my diet, I think.”

This weekend will also be the first time Dillon has raced on Daytona’s road course. When the Cup series ran here for the first-time last August, Dillon had to sit out due to a positive COVID-19 test. The Cup series will race on the road course again in just a few short weeks.

“I figured any laps on the track would be helpful and turns out that there was an opportunity with Rick Ware, Eurasia and all of it kind of came together fast,” Dillon said Thursday. “It’s been a blast to try and figure out something new. It’s the first time I’ve been nervous getting in a race car and then the speed difference from like a cup car, or even just going at that pace, the grip level that these cars have been really good for me to experience. I think it’s going to help me a ton getting back in the Cup car hopefully.”

His first practice session in the car, however, didn’t exactly go according to plan.

“I think the first session I got in it, I was driving along, and I had my thumbs in the wrong area on the steering wheel,” he said laughing. “Got into breaking zone and actually hit the pit limiter. So it cut the engine right away and I kind of panicked trying to find the button, hit the pit limiter back off. Well, then I had hit the full course yellow, so it started cutting the engine again. So it was quite hilarious, the first session I had in the car.

“It’s been fun learning that,” he added. “Just the high pace and the speed of these cars, the grip level, and then the physical strength that is needed with your neck and you’re in a different body position from our cars. We sit more upright in the cup cars. So just using some different muscles, but by the end of that night session … Oh, and, and I also didn’t … Racing at night over here, if you’ve seen the movie Ford versus Ferrari, and you look at how dark it looks on the movie, like the visual cues in that movie are very accurate. You can’t see anything. It’s crazy. It’s very dark out. You can see some things. I don’t know why the bus stop isn’t lit.”

Part of the learning curve for Dillon comes from working in a different form of motorsports as well as working with drivers from other disciplines and other countries.

“It’s a great experience,” he said. “I’ve enjoyed the garage as well. It’s a different atmosphere. You get to drive golf carts around and it’s a busy garage. I about got taken out by a four-wheeler. I know I got to keep my head on a swivel. I walked through the Cup garage and I feel like I know where everything’s at and this one, it’s just fast paced, busy. It’s different, but I like it. I was able to just kind of take it all in and take a golf cart ride around and see different things. And it’s been nice, and everyone has been great to talk to and been very welcoming.

“And as far as the drivers, it’s very cool to work with them. I mean, I’ve got guys from the Philippines, New Zealand and England on my team. Not just the drivers, but just like the guys working on the cars. And it’s really just, the 24-hour race, is kind of like the world coming together. It’s pretty cool to see and get to work with different people and see different cultures come together for one common goal to try and win one of the biggest races of the year.”

Dillon says that one of his main reasons for running the Rolex is to get experience to help him in the Cup series. There are a total of seven road course races on the 2021 Cup schedule this season starting with the Busch Clash in a little over two weeks.

While it may be a test session for Dillon, there is a chance he could be part of a team that wins its class. Dillon is known for getting a tattoo after every win, and he added that should he win this weekend he will be getting inked. The win also comes with a Rolex watch. Instead of wrestling with whether he would give it to his wife though, Dillon is a bit more diplomatic.

“I’ll get another one, if we win,” he said. “I’ll make sure we get two. I’ll pay for it myself so my wife and I both have one. But I’ve got the Daytona Rolex already from winning the 500 and it says Daytona 500 champion, but I think it’d be cooler to get the … Everyone knows about the watch from the Rolex. So, it’d be really special to, and in a different series and think it would be my first road course when as well. So, it’d be huge. I’d be very happy with that.”