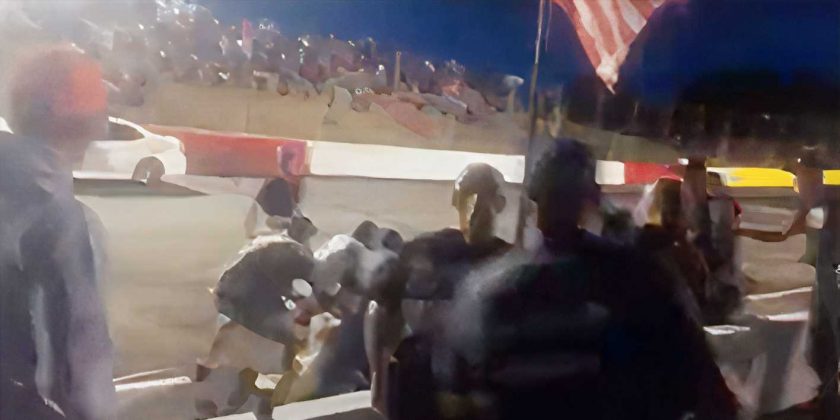 The on-track incident between Jacob Heafner of Justin T. Carroll Racing and Justin Johnson of Justin Johnson Motorsports spurned a pair of post-race brawls, including one where a crew member was struck in the face with a torque wrench and required 10 stitches at a local hospital.

According to Short Track Scene, the on-track animosity started before a late restart when Heafner drifted up into Johnson under caution, resulting in contact between them. The two came together again during the final laps under green flag conditions.

The two teams began to argue on the frontstretch after the race, and a brawl ensued. That fight was separated by track officials and a sheriff’s deputy, but they began fighting in the infield several minutes later due to someone slashing Johnson’s tires.

That fight resulted in John Carroll, Justin’s father, getting struck in the face with the wrench by Johnson’s wife, Brittany. He was treated and released and is expected to make a full recovery. While the Caldwell County Sheriff’s Office were called in and filed a report, it’s not clear if any charges will be filed.

Video of the altercation at Tri-County…

Both driver and woman appear to have used the Torque wrench as a weapon.

Not sure on the condition of victim as of now. pic.twitter.com/lfbjYmssE9

“I honestly don’t know what the fussing and fighting was about,” Johnson told Short Track Scene. “It’s embarrassing to be a part of, but we were on the frontstretch in victory lane and got rushed by five or six people. I thought it was over, but our tires got slashed and then they came at us again.”

The younger Carroll said Johnson should take responsibility for everything that transpired on-track.

“You don’t get to choose until the one to go signal,” Carroll told Short Track Scene. “They gave us the two-to-go signal and we stayed to the outside of it. Johnson tried to drive to our outside and before they red-flagged the race, Justin drove into Jacob’s left-side door for no reason and killed it.”

Carroll expressed inevitability that something was bound to transpire between the two family teams.

“I never wanted this to start,” Carroll said. “Time and time again, he has run into my cars and we’re tired of it. You can only be pushed around so long before enough is enough. What happened at [Tri-County] is inexcusable and should have never happened.”

Johnson said the torque wrench only came into play because the Carroll team were throwing parts and pieces at his family team. He claims the wrench was only branded in self-defense due to being pelted by debris and being cornered and outnumbered, not to mention having his tires slashed.

The two teams have previously been involved in on-track incidents earlier this season at Hickory Motor Speedway in North Carolina.

“This was embarrassing for our partners and supporters,” Johnson said. “I wish there was a way to avoid it but you just can’t turn and run the other way when victory lane and your pits get bum-rushed.”

Justin T. Carroll is not to be confused for Justin S. Carroll, another Mid-Atlantic Late Model Stock regular who has begun to make sporadic ARCA and NASCAR appearances over the past several seasons.