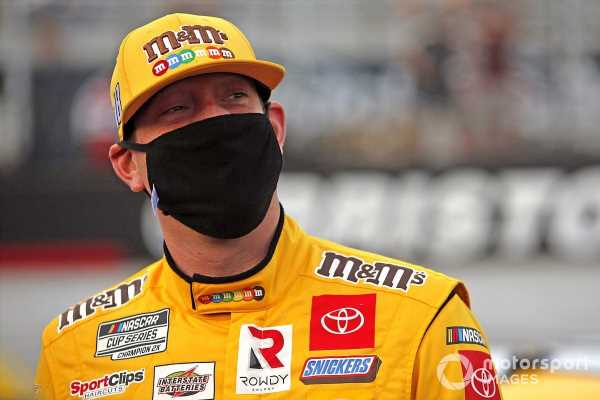 Aric Almirola’s playoff hopes have been put in serious jeopardy following a crash while leading at Talladega Superspeedway on Sunday.

Almirola was leading the field when playoff rival Alex Bowman got a run exiting Turn 2. The two drivers came together and Almirola ended up in the outside wall.

Kyle Busch was collected as well and spun to the inside, briefly going airborne as he collided with Ryan Blaney. The rest of the field avoided the carnage with Joey Logano sustaining minor damage.

Almirola, who entered this race behind in the playoff standings, was unable to continue. This puts the Stewart-Haas Racing driver in a must-win situation at the Charlotte Roval next week.

“I’m okay,” said Almirola after exiting the infield care center. “I honestly haven’t seen the replay, so it’s hard to say, but I got hit from behind and turned in the outside fence.  It’s such a shame.  We had such a fast Smithfield Power Bites Ford Mustang. I’m just disappointed. We were doing everything we needed to do. We were closing in to the end of stage one and it looked like we were gonna score a lot of points there, which is exactly what we needed to do. It looks like he got to my outside and my car started to turn to the right, so it’s unfortunate. I don’t know if he got in the back of me and hooked me or how that played out, but my car just made a hard right into the fence.

“It’s unfortunate. I had a lot of confidence going into today. I thought we were gonna have a good shot to win.  Our car was so fast, but unfortunately the Good Lord had different plans for us today. We’ll go onto the Roval and try one more time.”

Busch soldiered on despite suspension damage, but a left front tire failure soon after destroyed the fender of the No. 18 car, further complicating things for the reigning series champion.

Bowman’s situation is less bleak as he had a 20-point buffer entering Talladega, and he was also able to continue despite nose damage.