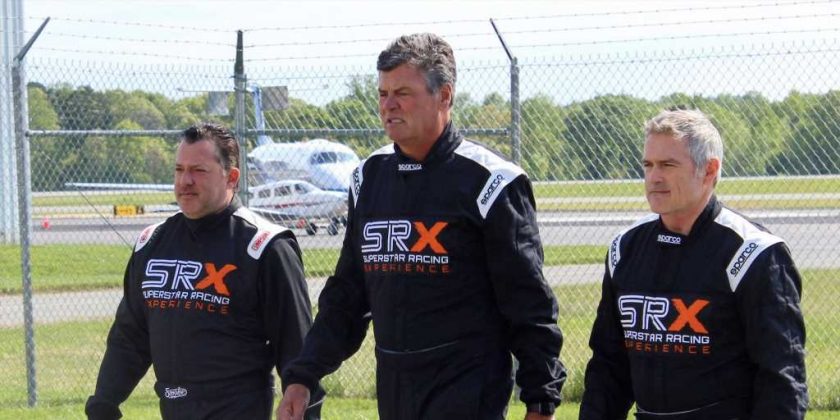 Tony Stewart anticipates a dogfight from Bobby Labonte when they eventually find themselves side-by-side in the Superstar Racing Experience this summer, friendship be damned.

That’s kind of the point.

“Remember one thing,” Stewart says, “We’re still racing and we’re still going for wins and trophies. So, at the end of the day, it doesn’t matter how many friends you have when you take the green flag.”

Stewart has made a lot of friends over his three decades in professional motorsports and he’s taking a handful of them back to their roots over the next two months for one of the most anticipated experiments in recent motorsports history.

Conceptually, Superstar Racing Experience draws inspiration from the International Race of Champions, which for decades pitted contenders from numerous disciplines against each other in identically prepared cars on NASCAR Cup Series venues.

This new take on IROC will take a full field of racing legends, 10 of the most recognized names in motorsports, pitting them against a rotating collection of current generation superstars and regional grassroot champions.

At each stop along the way, the 10 full-timers will have to compete against a local legend like six-time NASCAR Whelen Modified Tour champion Doug Coby at Stafford or two-time Knoxville 410 Sprint Car champion Brian Brown.

The cars were designed by NASCAR Hall of Famer Ray Evernham, and it’s a machine that he describes as being primarily a road course car — to be used on a schedule that includes no road racing with the intent of leveling the playing field on dirt and short tracks.

“Hey Michael, would you mind if I got Kyle Larson to fill in for me for a couple races, like Knoxville and Eldora,” Elliott said during a SRX press conference as a cheeky reference to his lack of high-level dirt experience.

No, Elliott is going to have to figure out the clay and probably against Larson at some point this summer, too.

“I know we’re going to have some ringers,” Waltrip responded. “And I’ve heard names like Greg Biffle and Denny Hamlin. Kyle Larson on dirt; that just wouldn’t be fair for us, Bill.”

Larson hasn’t been fair to anyone on dirt over the past 15 months, winning over 60 races in 110 starts in Sprint Cars, Midgets and Late Models.

Of course, he would want to add the Superstar Racing Experience to that expansive resume.

“I don’t think (it’s fair) either,” Elliott said with a laugh. “That would be like putting Tony Stewart in one of these cars, wouldn’t it?”

Yeah, and they had best get ready for that, too.

Stewart has had his hands full since retiring from NASCAR after the 2016 season. He has successfully operated Eldora, owns the prestigious All-Star Circuit of Champions Sprint Car tour and an elite World of Outlaws team.

He won an All-Stars Circuit of Champions race last month at Virginia Motor Speedway and even earned a drag strip competition license over the winter.

Smoke intends to take his buddies over the woodshed this summer, and he expects the same intensity in return.

“It’s actually easier for guys to lean on each other when they’re friends,” Stewart said, “That’s because you don’t know how much to give and take with someone when you don’t know them or haven’t raced against each other.

“When you are friends with someone, you can say, ‘Hey, man, I’m sorry, I made a mistake, or I was just trying too hard.’ Your buddies are going to give you a lot of rope and they’re going to go all out too. So, I really think this has the opportunity to be really hard-nosed racing because of that.”

Not entirely joking, but not super serious either, Evernham is already thinking about what SRX will mean for his workload this summer.

“I am a little nervous about Tracy, Stewart, and Willy T. getting together and tearing some stuff up,” Evernham said with a laugh.

There has been a lot of laughter these past several weeks and Stewart hopes the Old Buddies Having a Good Time Tour translates to television fun.

The genesis of Superstar Racing Experience can actually be traced to a Manhattan office space, the White Plains Renaissance Square, three miles from the original site of the White Plains Hill Climb — one of the earliest automobile races in the early 1900s.

The office houses the working space of sports agent George Pyne and TV executive Sandy Montag. Pyne spent 11 years with NASCAR (1995-2006) and rose as high as Chief Operating Officer for the sanctioning body.

SRS was Pyne’s idea, after years of planning with Evernham, to create an action-packed two-hour made for TV motorsports product but only with the right cast of characters on the right platform.

“George and I had been friends for a long time and we’re always talking about different ideas,” Evernham said. “… The timing didn’t work out for a lot of them.

“But he called one days and said we need to try to bring back IROC, and that conversation started to evolve into SRX.”

Evernham then called Stewart to lean on his vast network of racers to gauge interest.

“All it took was 20 minutes to convince me, and I was all in,” Stewart said. “I was really interested in it and committed to doing my part to bring people in.”

That led to another group session with Montag to see if there would be any takers in Hollywood.

“We immediately started brainstorming,” Montag said. “The first media call was to Sean McManus at CBS, who instantly jumped on it.”

CBS is heavily rumored to be interested in acquiring the IndyCar television contract when the current agreement concludes at the end of the season. CBS also airs select World of Outlaws events and television specials.

NASCAR’s broadcast agreements with FOX ($3.8 billion) and NBC ($4.4 billion) end after the 2024 season, and Superstar Racing Experience with its vast roster could prove to be a valuable tool to gauge audience interest in acquiring both disciplines.

“When you think about it, we’ll have a sold-out racetrack, iconic drivers, iconic crew chiefs, man over machine and a national television audience,” Pyne said. “What can be better?”

Certainly not the broadcast team, which reads like a love letter to racing purists with the legendary Allen Bestwick on play-by-play duties following NASCAR stints with Turner Broadcasting, NBC Universal and ABC-ESPN. Danica Patrick, James Hinchcliffe and Dario Franchitti will join Bestwick as driver analysts, covering two races each.

Lindsey Czarniak will serve as host with Brad Daugherty as the roving analyst. Matt Yocum, recently let go from FOX Sports after 20 years, has signed on as pit road reporter.

“What makes this series appealing is, it’s going to be a lot of fun,” Bestwick said. “If you could take everything that you’ve learned about racing over 30 years, and then they hand you a clean sheet of paper and say, ‘Go ahead, design something from scratch that you’ll just have a blast with on a Saturday night,’ that’s what this is.

“I’ve known about this concept for two years now, and I just said, ‘Man, that’s going to be fun.'”

THE FORMAT AND THE CAR

Speaking of fun, that’s what the format will encourage, pure fun.

The cars will be randomly assigned before every race, as will the crew chiefs issued to both in the name of competitive parity. The races will be 100 laps each, except for tiny Slinger at 150 laps, with two heat races and a halftime break to make adjustments.

The idea isn’t to highlight engineering and technical prowess, like on Sundays, but driver personality and skill diversity.

“I wanted them to be less aero dependent with more mechanically grip,” Stewart said. “The more you take away the aero, the better racing you’re going to have.

“I mean, look at a non-wing Sprint Car and Midget, and no one races closer than those guys, because there’s no aero. It’s when you put a wing on a Sprint Car, or IndyCar, and NASCAR, that’s when it becomes about track position and aerodynamics are the reason why.

“That was the biggest thing I stressed to Ray, and he knows all of this, that we needed to take aero out of the equation so there’s more mechanical grip so it’s all about the driver. It’s about your driving and your feedback to the crew chief when everyone has the same car.”

Evernham worked as an IROC career before his career took off with Jeff Gordon at Hendrick Motorsports, making him the perfect innovator for an evenly prepared spec car series designed to tackle dirt and pavement.

“We wanted to make sure we had a car that these guys and girls could go out, have fun and be safe and that their driver input would be the difference on-track,” Evernham said. “That was very important.

“You know, steering wheel, brake, pedal, gas, pedal — all the driver input stuff. This car is very sensitive to that, and we’re proud of that.”

Kenny Schrader has tested the cars over the past several months and said the car is relatively easy to drive by itself, but difficult to drive fast and beside another competitor.

“That’s what we wanted,” Evernham said.

Ultimately, everyone involved with Superstar Racing Experience has cited a void left by the International Race of Champions over the past 20 years.

There was something fun and novel about a race that pitted Sprint Car star Steve Kinser against NASCAR’s Jeff Gordon and IndyCar’s Al Under Jr. Stewart won the 30th and final IROC championship in 2006 against the likes of Kinser, Sam Hornish Jr. (IndyCar), Max Papis (GRAND-AM) and (ALMS’) Wayne Taylor.

He misses that diversity and wanted to add to it with dirt and short ovals, the ultimate equalizer.

“IROC was always popular back when I ran it,” Stewart said. “This concept of doing IROC but with a twist is something that is going to grab everyone’s attention.”

Both Stewart and Evernham are very adamant that this isn’t intended to be competition for NASCAR either. In fact, with a looming television contract negotiation, a healthy SRX on CBS could give that sanctioning body another potential suitor.

“I don’t know if this is something that’s been missing, but we have the opportunity to do something that no one else can because they’re legitimate competition with manufacturers and race teams,” Evernham said.

“NASCAR has owners, drivers and sponsors that are competition on and off the track. Since we’ve made the cars equal, and we own them, we get to make it about the personalities. We get to tell stories about these local legends and what they’ve accomplished. We’re just trying to make a personal connection with race fans.”

Stewart says it’s a compliment to the current racing landscape.

“We’re going to spotlight IndyCar drivers, road racers, stock car drivers, and where you can watch them race,” Stewart said. “Look at the age swing of the entire roster we have this year. It’s a great mix of talent.