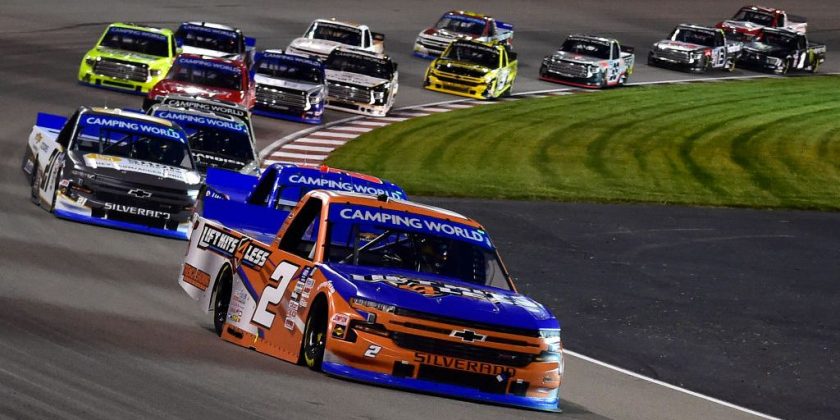 It took the dust settling in the shadow of the St. Louis arch, not to mention turning the lights back on after a one hour power outage, but Sheldon Creed began this Truck Series playoff run the same way he ended the last one.

In fact, Creed swept all three stages at World Wide Technology Raceway at Gateway and left little doubt that he was the driver to beat over the next three months, even if the recency bias suggested otherwise.

“My guys put together such a good truck” said Creed, who drives the No. 2 GMS Racing Chevrolet. “We’ve been working hard all year and obviously haven’t had the speed at times, and I’ve made mistakes at times. But we were able to build this brand-new truck and I feel like we’ve taken everything we’ve learned this year and applied it. They gave me a hot rod today and I couldn’t be happier.”

The race was in doubt, however, and came down to an overtime restart, which is also how he won the championship last year in November.

“I love late-race restarts,” Creed said. “I didn’t want it, but when it came out, I was just thinking, okay, just focus and execute.”

Creed is mulling his future, and which racing division he could potentially compete in, with success going a long way towards increasing his options.

The 23-year-old entered the playoffs this year with a single victory and the No. 5 seed.

“This is huge,” Creed said. “I’ve had such a stressful month trying to figure out what I’m doing next year, so many mixed emotions on what I’m going to do and if I’ll even have a ride. Biggest thing is to keep winning and get ourselves in the Championship 4 and execute.”

Meanwhile, 6 of the 9 other playoffs suffered a variety of issues in their pursuit of the championship. That includes championship favorite and top seeded John Hunter Nemechek, who endured two setbacks.

He was forced behind the wall with 31 laps to go with a brake rotor failure, but returned to finish the race, albeit several laps down. On a restart 15 laps prior, Nemechek stalled on a restart and suffered rear end damage when he was hit from behind.

He finished 22nd on Friday night, but had such a massive lead over the cutoff entering the first round that he still left Gateway 55 points over the cutoff.

When things go wrong, they go wrong in a hurry.

On the other hand, Austin Hill, Carson Hocevar and Todd Gilliland were all involved in the lap 113 crash resulting from the Nemechek stalled start. While Hocevar was able to persevere to a top-10 , placing him 13 points to the good, Hill (+21) and Gilliland (+10) were not able to create as much clearance on the cutline. 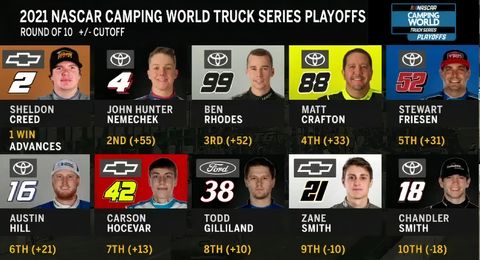 The chaos amongst the playoff contenders kept the points battle close, 49 points separating Austin Hill in sixth to Chandler Smith in the final position.

The last two winless playoff drivers in the standings will be eliminated after the race at Bristol in three, which follows the race after Darlington in two weeks.

Lastly, it was a good points day for Matt Crafton, Ben Rhodes and Stewart Friesen, who finished second through fourth and put themselves in position to advance after Darlington.

“Yeah, it was a great points night, all-in-all,” Crafton said. “They knew we were here. We drove from 10th to get to second. We just needed a little bit more to catch (Creed). The 2 was really, really good, but can’t thank these guys for working as hard as they did lately. They’ve been working their butts off. We went through and threw all the notebooks away from ’20, ’19, ’18. We went back to the old school stuff. I guess it still works here.”

Rhodes hasn’t won since claiming the first two trophies at the season but has enjoyed the best average finish of anyone this season, and it was more of the same on Friday.

“We have a few issues going on with our truck in the front end, but we know what we were fighting,” Rhodes said. “We will go back home and make it better, but overall, I’m happy with my Bombardier Tundra. It was fast from the get-go. They made good improvements on it, so that I could hang with them at the end of the race. I have to say Matt Crafton was driving me hard. That was the hardest I’ve driven in a while. I had my tongue hanging out for like the last 100 laps.”

“Good start for us in the Playoffs,” Friesen said. “I knew we would be good but I just got a little tight there in the last run. We got up there quick in the first stage and then kind of just leveled out in third or fourth. I wish I would have gotten a better restart at the start of that last stage. I’m proud of my guys.”

Hailie Deegan survived the attrition to claim the first top-10 finish of her career in seventh-place.