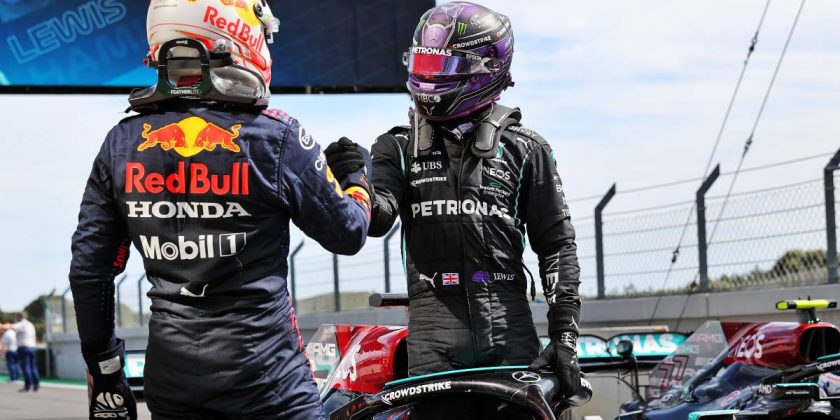 Nico Rosberg was “amused” after the Portuguese GP, believing Max Verstappen is “starting to understand how good Lewis Hamilton is”.

Both title rivals came to Portimao with a win each for the season, but it was Hamilton who signed off for the weekend 2-1 up as he took the chequered flag ahead of Verstappen.

The Briton was forced to battle his way past Verstappen and team-mate Valtteri Bottas in the opening stages, but from there built a gap ahead of the pair and cruised to victory in the end with Verstappen taking P2 and 18 points for Red Bull.

With that result Hamilton stretched his lead in the Drivers’ Championship to eight points over Verstappen as Mercedes continue to claw their way back to top form, and post-race Rosberg claimed that Verstappen is increasingly being made to understand just “how good Hamilton is”.

Rosberg is the only driver to have beaten Hamilton to the title since 2014, becoming World Champion with Mercedes in 2016 and retiring just days after.

“What a phenomenal race by Lewis,” Rosberg told Sky F1.

“I’m a bit amused because Max Verstappen is starting to understand better and better how good Lewis Hamilton is.

“He needs to do everything perfect to beat him in the World Championship but at the moment it is 2-1 for Lewis.”

Verstappen was set to boost his Portimao points total to 19 after setting the fastest lap of the race following a late stop for soft tyres, but his time would be deleted for breaching track limits.

This came just one day after the Dutchman saw his fastest Q3 time chalked for the same offense which would have landed him pole position.

And Rosberg made it clear that Verstappen was too error prone in Portimao.

“I think they would have wanted the win here because they had the fastest car,” said Rosberg when asked if Red Bull would be satisfied with P2 and their competitive pace against Mercedes.

“If we think about qualifying yesterday it was Max Verstappen who had the fastest lap, it just got deleted because of a mistake.

“And fastest lap again in the race, Verstappen got it deleted again for going off track limits. That’s too many mistakes.”