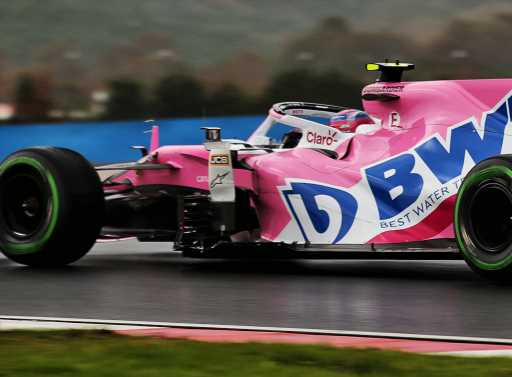 Lance Stroll gambled on the inters early in Q3 to clinch pole position in a chaotic qualifying for the Turkish GP in which Q1 took over hour to compete and Q2 began with a safety vehicle on the track to gain back 58 seconds.

Slippery when dry, tricky when wet, Formula 1 geared up for an entertaining – at least for those watching on – but difficult – for those in the cars – qualifying session at the Istanbul Park in Turkey.

Although it had not rained for almost 90 minutes prior to qualifying, the track was still very wet as the drivers lined up at the end of the pit lane for the start of Q1. A few drops of rain began to fall as well adding to the drama.

Red Bull still wet out on the inters with practice pace-setter Max Verstappen spinning twice, Nicholas Latifi, Daniil Kvyat and Pierre Gasly also spun while one of the Haas drivers, Romain Grosjean, went sliding off the track. The rest were twitching so put it mildly.

“It’s raining a crazy amount now” was Lewis Hamilton’s assessment as he went P4 before heading back into the pits. His team-mate Valtteri Bottas was second fastest with Esteban Ocon the surprise pace-setter. Lance Stroll was third.

The session was red flagged with 6:56 on the clock as the conditions became too treacherous. Leclerc, Grosjean, Gasly, George Russell and Latifi were all in the drop zone. As the rain lessened the track sweepers headed out to do their bit while the drivers waited in their cars and Race Control announced a 3:55pm restart.

The drivers were quickly out, opting for a mix of inters and full wets. Kimi Raikkonen was quickly sliding, rather impressively as it ended with the Alfa Romeo driver facing the right way as if it was all part of the plan and Leclerc took a trip across the grass.

The Haas driver is indeed stuck, and qualifying is stopped once more#TurkishGP 🇹🇷 #F1 pic.twitter.com/wbvTEDGduI

Over an hour after Q1 began, the chequered flag came out with Verstappen and Alex Albon quickest, the Dutchman 1.9s up on his team-mate, while out went Kevin Magnussen, Kvyat, Russell, Grosjean and Latifi dropped out. Latifi’s session ended with his Williams in the gravel.

Magnussen complained about other drivers not slowing for the yellows for Latifi’s off with Race Control announcing all that will be investigated after qualifying.

Adding to an already strange day, Q2 began under double waved yellows as the marshals were still retrieving Latifi’s stricken Williams with a safety vehicle being used. 58 seconds of the session was under yellows.

Red Bull and Racing Point traded early blows with Verstappen setting the pace, 1.9s up on Albon. Perez was third before Valtteri Bottas and Hamilton moved up to second and third. They were, however, 1.8s down on Verstappen.

Verstappen heads the table with a time of 1:52.036 with just minutes remaining in Q2#TurkishGP 🇹🇷 #F1 pic.twitter.com/ksfyMISGdZ

Leclerc, down in 14th place, went off at Turn 1 while his team-mate Vettel moved up to 11th place with only seconds remaining in the session.

Verstappen finished quickest ahead of Albon and Hamilton while out went Lando Norris, Vettel, Carlos Sainz, Leclerc and Gasly.

The stewards announced yet another investigation involving Perez and Sainz with the latter accused by the Racing Point driver of impeding him.

Q3 saw the Mercedes team-mates head out on the full wet tyres as too did Verstappen and the rest of the top ten except for Ocon and Perez, who both opted for the intermediate Pirellis.

Verstappen laid down the early benchmark a 1:52.3 but that was beaten by Perez’s 1:52.0 on the inters. Stroll, on the full wets, was third some 1.8s down. Perez promptly spun on his next hot lap.

Red Bull immediately pitted Verstappen for inters with Mercedes doing the same with Bottas and Hamilton. Verstappen, though, struggled to get his inters to work like Perez’s.

The Racing Point driver was sitting pretty as Verstappen chases the Alfa Romeo of Raikkonen around the circuit, unable to up his pace.

Perez did up his to a 1:49.321 but that wasn’t enough to hold off his own team-mate Stroll who pipped him on his final lap. A 1:47.765 handing the Canadian his first-ever Formula 1 pole position.

Verstappen claimed second place with Perez third ahead of Albon.