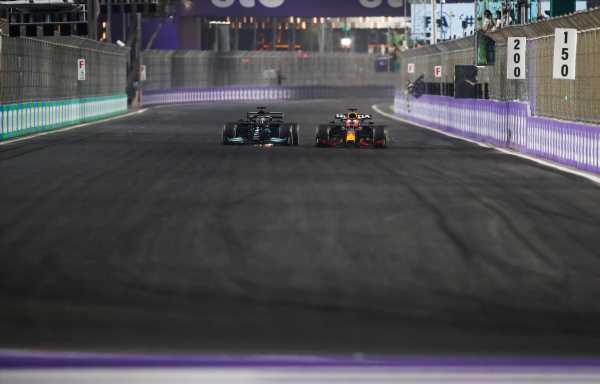 Lewis Hamilton picked up damage as he hit the slowing Max Verstappen in Saudi Arabia, a risk that Ralf Schumacher loved, but he urges caution.


Drama has been ever-present this season between Verstappen and his title-rival Hamilton, but at the Saudi Arabian Grand Prix, the penultimate round of the 2021 season, it all got a bit too “erratic” for the liking of the stewards.

In-race Verstappen was hit with a five-second penalty for leaving the track and gaining an advantage, that incident occurring as he defended against Hamilton, while post-race Verstappen saw 10 seconds added to his time after slowing down the straight, at the order of his Red Bull team, to let Hamilton through, causing a confused Hamilton to drive into the back of him.

It was a race full of little controversial moments, much to the frustration of Hamilton, and Schumacher enjoyed Verstappen’s brand of risk taking, claiming that it was not Verstappen’s intention for Hamilton to hit him.

However, that in itself to Schumacher’s mind was a sign that sometimes the Dutchman needs to be “a bit cleverer”.

“Max certainly didn’t want Lewis to hit his car, but he has now also slowed down a bit and slowly downshifted,” Schumacher told Sport 1 while analysing the collision which caused front-wing damage for Hamilton.

“I love the risk Verstappen is taking. Max just has to be careful not to overdo it. It gets borderline with him, sometimes he has to be a bit cleverer.”

Only one round of the season now remains, and both drivers head to Abu Dhabi level on 369.5 points. Verstappen holds P1 due to claiming more victories than Hamilton this season.

And while Schumacher will be satisfied with whichever driver wins the 2021 World Championship, he suggested that Verstappen is closer to his “type” of racing driver.

“Both drivers have brought the excitement back to Formula 1 right to the end. I don’t begrudge them both the title, but Verstappen is closer to me in terms of type,” said Schumacher.

“He has an opinion, he embodies the young motor sportsman who has learned very quickly. Max, like the Red Bull squad, also deserve it after so long.”

Schumacher also feels as though Hamilton needs more help from his Mercedes team at times, while Verstappen can rely on himself and his “super potential”.

“In that respect, Hamilton sometimes needs a lot more from the team. Max simply has super potential. Unfortunately, he’s in the worse car at the moment,” Schumacher stated.