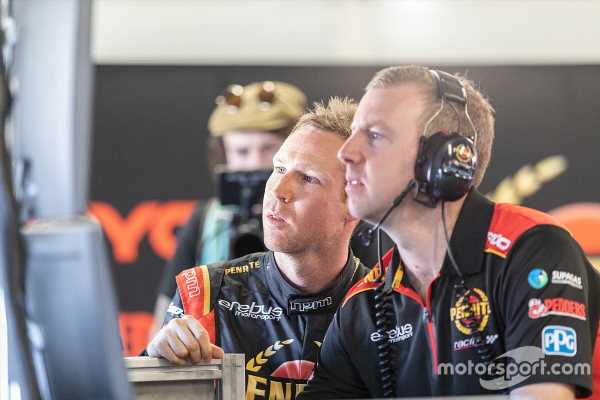 David Reynolds is tipping a return to form at next week’s Bathurst 1000, where he’ll be reunited with race engineer Alistair McVean.

McVean has been stuck in locked-down Melbourne for the past seven events, having been unable to take part in the unprecedented border escape back in early July that included Erebus Motorsport and the four other Victorian teams.

While he’s continued to have input via video link, on-site race engineer duties for Reynolds’ Holden have fallen to the likes of Erebus CEO Barry Ryan and data engineer Tom Moore.

The makeshift arrangement has coincided with a form slump for Reynolds, who’s only recorded eight Top 10s from the last 21 races.

He hasn’t been on the podium once in that time, either, with a fourth at Sydney Motorsport Park and a fifth in Townsville his best results.

However a real-world reunion with McVean now beckons for Bathurst, Great Race winner Reynolds confident he can turn things around at Mount Panorama.

“I’m feeling really good about this one,” Reynolds said on the latest episode of the Below the Bonnet podcast.

“I think I can drive the track pretty well. And obviously to have Al back in real life, I think it’s going to make a big difference.

“It’s all well and good to have him there in spirit on Zoom, but it’s not the exact same as being there live, smelling the track, seeing the day, seeing the response in the driver’s eyes when he comes in, getting the whole emotion and everything.

“It’s going to make a big difference. I think we’ll be back to normal.

“He coaches me throughout the weekend. He makes a big difference to my performance, a huge difference. Just having him calm and rational, it’s the best thing. Hopefully it’s going to be good.”

With everyone from Melbourne requiring two weeks quarantine to get access to New South Wales, McVean is currently serving his time in a hotel in Sydney.

According to Reynolds he’s making the most of the limited available space, with some impressive ground covered in his five-metre long hallway.

“He told me he’s run 38 kilometres in his apartment in the last seven days,” said Reynolds.

“He’s got a hallway about five metres long and he just does laps of it. What an animal. He sent me his heart rate [data]. He ran 10 kays once. What a legend.”

Reynolds will be paired with highly-rated young gun Will Brown for the Great Race.