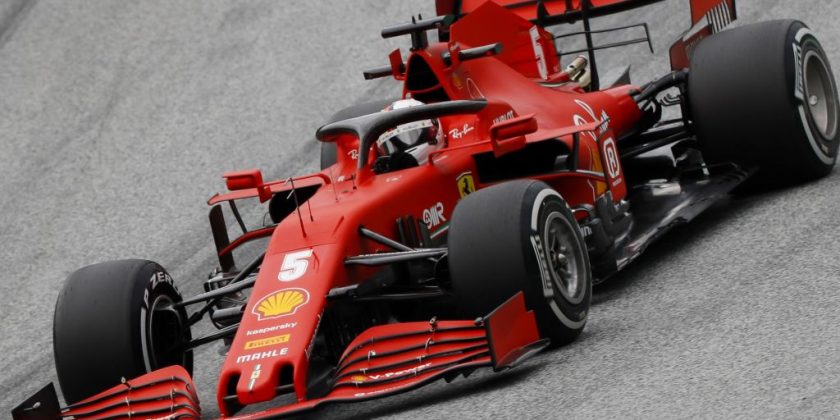 Sebastian Vettel was frustrated at being used as a “brake block” to help his team-mate Charles Leclerc in the Russian Grand Prix.

The four-time former World Champion, who is being released by Ferrari at the end of the season, was given another clear indication that he is now very much the No 2 driver in the team.

The situation was exacerbated at Sochi by the fact Leclerc started the race from P10 on the grid and Vettel from P14 after he had crashed out of Q2.

With Leclerc producing a strong performance, Vettel’s pit-stop was delayed so that he could hold up the Renaults against whom his team-mate was directly racing.

The German did a good job of fending off Esteban Ocon but was eventually overtaken by both of the yellow and black cars, firstly Daniel Ricciardo who was granted a bite of the cherry under team orders when his French colleague was told to let him through.

Eventually, Leclerc split the Renaults by finishing in P6, while Vettel ended up racing his former team-mate Kimi Raikkonen’s Alfa Romeo on his way to a disappointing P13.

“It was a bit of a boring race as we didn’t have many options in terms of strategy,” said Vettel.

“My start, from the dirty side of the track, wasn’t ideal and so I couldn’t benefit from other people’s crashes and collisions. I tried everything I could but I wasn’t able to capitalise on lap one. I didn’t really have a clear track ahead of me, so that was a shame.

“After the Safety Car period I was a bit stuck and I struggled to stay close to the cars in front of me.

“Then I think obviously we got stuck in the slow group at the back of the field and that was our race. I played the brake block until the pit stop. After that there was not much left.

“It was clear I was left out to slow down the Renaults. It didn’t help me, of course. I think we could have taken a point but that doesn’t change much now.”

Next up for Vettel is a race on his home soil, the Eifel Grand Prix at Nurburgring on October 11, but he is not expecting anything special performance-wise in front of his fellow Germans.

He said: “It’s certainly one of the nicer races, but the car will be similar like the last two weeks so it won’t be an easy weekend.”