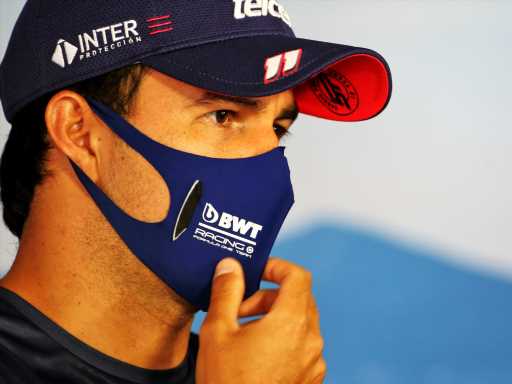 Otmar Szafnauer has challenged the theory that Sergio Perez caught COVID-19 on his trip home to Mexico – claiming the Racing Point driver contracted the disease on his return to Europe.

Perez had to miss the two F1 races at Silverstone after testing positive for the coronavirus, those results coming after he had flown to his homeland to visit his mother who had been involved in an accident. Nico Hulkenberg replaced Perez in the Racing Point team.

But with Perez back in action at the Spanish Grand Prix in Barcelona, team boss Szafnauer was asked by Sky Sports during FP2 if he wished Perez had not flown to Mexico in between races – and put forward the alternative theory for how the driver had picked up the virus.

“Well that presumes he actually contracted the virus in Mexico. We don’t think that is the case,” said Szafnauer.

“We think he got it from one of the private chefs he hired and frankly that could happen to any one of us.

“He took every precaution. He flew privately, he stayed with his parents and didn’t go out to eat. Then when he got back to Europe he hired chefs so he didn’t have to go to restaurants and we think he got it from the chef.”

On Perez’s condition now, Szafnauer added: “It’s great to see him get over the virus. When he tested positive he was full of the virus and he got it out of his system pretty quickly. I think that’s because he is in great shape.

“We hope he gets back up to full speed in the car again soon.”

In his press conference ahead of the Spanish Grand Prix, Perez hit out at accusations in some quarters that he had not taken enough care while in Mexico – with suggestions that he had been meeting sponsors and even taking selfies with other people.

“It’s a total lie,” the 30-year-old told F1. “I went to Mexico for two days to see my Mum, with all the precautions in place. I took care of everything. I followed all the guidelines.

“When I was in quarantine, I saw everything. I saw people saying I was taking selfies with a lot of people and that I made up the story about my Mum.

“So much bullshit, and so disrespectful.

“I have done nothing differently to anyone in this paddock. I took all the precautions and it just happened to me.

“It happened to another friend in another team while I was in quarantine. He said ‘look, I tested positive too’. It can just happen to anyone.

“But what kind of happened, if tomorrow there is someone else infected, people just make up stories instead of being worried about their health.”