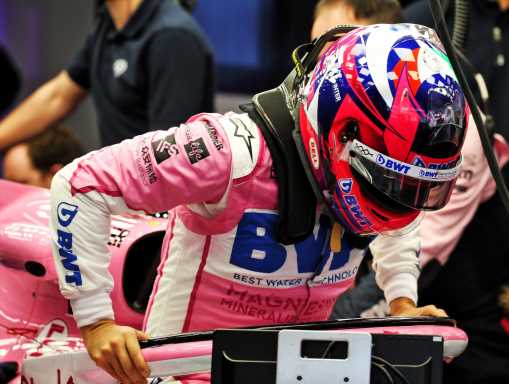 Sergio Perez’s final grand prix with Racing Point ended in heartbreaking fashion as he ground to a halt in Abu Dhabi.

The Mexican driver suffered a sudden loss of power, and coming out of Turn 19 with the issue clearly terminal he was forced to park the RP20 up and retire from the race, triggering the Virtual Safety Car and then the full SC.

Initially an engine issue was reported, but media personnel at Yas Marina Circuit are now saying that it was a transmission problem which forced Perez’s retirement.

Perez is OUT with a mechanical issue 😭#AbuDhabiGP 🇦🇪 #F1 pic.twitter.com/uz927R7ZMK

Already Perez was up against it in his final race with Racing Point having started from the back of the grid due to engine penalties.

So for his last race with the team, and potentially in Formula to end this way was extremely disappointing.

The DNF was also a bitter blow for Racing Point’s hopes of P3 in the Constructors’ Championship.

The Silverstone outfit went in to the Abu Dhabi Grand Prix holding that position, 10 points clear of McLaren, but all the responsibility now falls on the shoulders of Lance Stroll to secure that position for Racing Point.

If this was the final time that we have seen Perez on the Formula 1 grid for a while, then he has said he is confident of returning in 2022 if he can’t land a seat at Red Bull for next season.

“All I can say is that I’m in big peace with myself,” he told reporters in Abu Dhabi, a week after winning the Sakhir GP, the first victory of Perez’s career.

“I’m not fully in control of my future at the moment. And it’s something that bothers you, obviously, I think any human being in this position, will struggle a bit.

“But given that it’s not in my hands, given the victory came, I felt that I made the most of my opportunities.

“So if I have a seat for next year it’s great. But if not, I’m willing to come back in ’22. I believe that I’m at the peak of my career, and the best years are ahead of me. So even missing missing a year, next year, I’m determined enough to come back for ’22.

“So if I have to take a year out, I’ll do it. But I am more determined than ever to come back. And I think the victory gave me some peace to myself, but also a lot more hunger. I want more in the sport.

“And after you do the first one, you know that you can do it again. And I want to do it many more times again.”