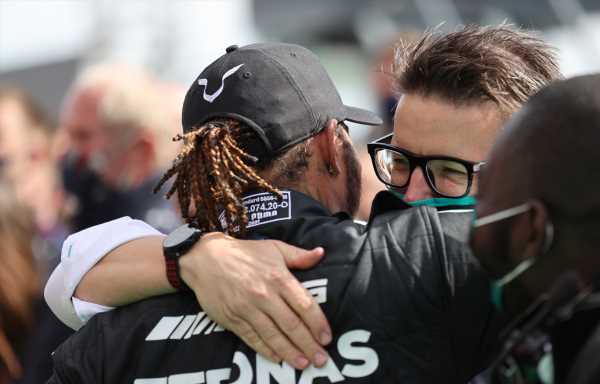 Equalling his best-ever start to a F1 season, Andrew Shovlin says he is “surprised” by Lewis Hamilton’s numbers given how close Red Bull are.

Arriving on the 2021 grid chasing a record-breaking eighth World title, Hamilton and Mercedes were aware that they would be facing stiff competition from Max Verstappen and Red Bull.

The RB16B came out on top in pre-season testing, forcing Mercedes to work hard behind the scenes on both the car, which was “was quite oversteery”, and the power unit.

Shovlin, Mercedes trackside engineering director, says the reigning World Champion realised from the very beginning that this was a championship he’d have to work for, and has done just that.

Hamilton has taken three of this year’s four wins, was runner-up in the one race he didn’t win, and has two pole positions to his name. He’s also the only driver this season to win a race from pole position.

As such he has scored 94 points, leading the championship by 14 ahead of Verstappen.

“In Bahrain in winter testing, what you could see with Lewis was he realised that he and the team were going to have to be absolutely perfect to be able to go out there and win races.

“You also realised that one bad test was not an indication to him that this might be a championship that he is not in the running for.

“It surprises me, that stat, because you think this is the least competitive margin that we’ve had for a number of years.

“But what I would say is he has arrived in a frame of mind that is just about maximising every little opportunity, be it on track, in the set-up, how we approach the weekend.

“He brought that to Bahrain and we haven’t seen it wane at all since.”

Hamilton extended his record for the most F1 race wins to 98 on Sunday but it was by no means one of his best.

“I think Lewis did a great job, but he has so many brilliant victories under his belt that I think this is probably not one of them, because he will say he could have done a better job early on,” Shovlin said.