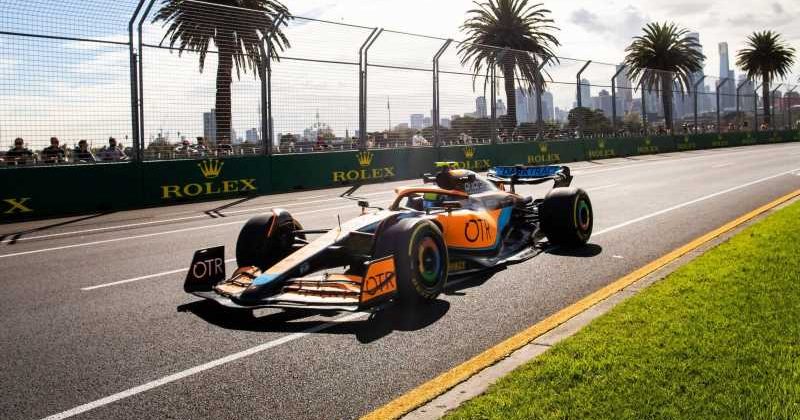 The opening race of the 2022 season in Bahrain was disastrous for McLaren, the team having failed to score points, and while Norris got himself and the team off the mark with a P7 in Saudi Arabia, it was not a positive start to this new era with McLaren finding themselves comfortably adrift of the leading pace.

But while the gap is still over a second, McLaren at least were able to get both of their cars into the top 10 during Friday practice in Melbourne.

Having seen signs of progress, Norris now is pushing to find even more heading into qualifying.

Put to him by reporters that the MCL36 looked to be going all right out there on the track, Norris responded: “Looked all right, wasn’t amazing.

“It was decent, probably our best Friday so far, so I’m hoping it can continue into tomorrow because we have a good feeling.

“We made a few changes and we’ve learned a bit this weekend already, or from the previous few weekends that we’ve implemented and I think it’s working reasonably well.

“We’ve taken a small step forward so it’s a good start, and hopefully we can continue that into tomorrow and make a couple of further improvements.”

Norris explained he felt more confident on his ‘push’ laps, although he thinks more work is needed on the long runs.

“I think we have a bit more work to do on the long run, I’m a bit more confident in the short run,” he said.

“I think a bit of it is our car limitation and a bit of that exposing a bit more in the high-fuel pace, so I think we have a bit to understand there and maybe some improvements to make for tomorrow, but I think stuff we can definitely try and change.”

Norris made his McLaren debut at Albert Park in 2019, but this now is a far different circuit following the redesign work before Formula 1’s return.

Several corners have been reprofiled and the track widened at others, which it is hoped will lend itself to more overtaking.

Norris said the track is definitely more physically demanding now, but crucially he had positive feelings when following another car and expects good racing action.

“I don’t know if it’s just these cars or the combination of this tarmac and the cars, but you’ve seen a lot of people going in the gravel, locking the fronts and so on.

“So it’s difficult to put it all together and stay consistent. But it’s exciting, it’s fast as well – physically a bit tougher than it used to be and these cars are very fast in the high-speed, so turns nine [and] 10, the fast chicane, it feels very fast already.

“Good fun, and I think from the following side of it as well, I did a bit and it seems good and I think the racing will be good as well.”

Ricciardo, who was consulted in the track redesign for his home race, particularly liked tackling the widened Turn 6.

And like Norris, he agreed the signs are positive this weekend from inside the car.

Asked if the car felt good, as it had looked on the track, Ricciardo replied: “It does – hopefully there’s not too much sandbagging going on with others.

“But the feeling in the car was good. It’s certainly a fun track and Turn 6, it was already a fun corner before but now it’s really quick and fun, kind of bounce off the kerb on the exit.

“Pretty cool. I enjoyed it, both sessions were top 10, so hopefully we can keep that going tomorrow. The main thing is I think we have a decent level of confidence in the car.”

It is highly likely those ahead of McLaren will unlock further performance come qualifying, so do McLaren also have more pace up their sleeve?

Ricciardo said he was already approaching the limit, but expects he can find more pace on the soft tyres than he managed on Friday.

“I think we found a good step this afternoon, especially in the first part of the session on the mediums. I was pretty happy there,” he said.

“I think with the softs, didn’t let’s say find as much as I think we can, so yeah there is more to come I think from that tyre.

“But otherwise from driving, I felt like I was getting on the limit today so I don’t have a second in my pocket – but of course you will find a little bit more as the weekend goes on.”

During the early stages of FP2, McLaren had been setting times among the leading pace when the medium tyres were in action.

Ricciardo enjoyed being able to feature so high up the leaderboard at that stage but come race day, McLaren’s main mission will likely be to hold their own towards the front of the midfield pack.

If the track delivers in terms of overtaking action, it means McLaren could be in for a busy afternoon in that quest – although Ricciardo is cautious not to overhype the redesign so soon.

“Ask me Sunday night!” he responded when asked if the Albert Park design changes can deliver in the race.

“I think it will be better. Will it be 10 times better? Probably not to that extent, but I think it will be some degree better and also complemented by an extra DRS zone the cars can follow a bit better this year.

“So if there’s not more overtaking, I think you will see at least closer racing and nose to tail. I think we’ll get a fun one on Sunday.

“But I’m cautious not to oversell it because I honestly don’t know what the fact will be, but the main thing today is it was an enjoyable driving experience.

“I was having fun out there. I know in the first part of that session [FP2], on the mediums we were kind of in the top…I heard sometimes P2, P3 and we were up there for a little bit.

“And that was just nice, let’s say to be on that side of the timesheets, and obviously I don’t know the situation people were doing with tyres, but the first part of the session we were competitive and I was having fun with that.

“Hopefully the crowd enjoyed our first day of F1 back here in Melbourne.”