The answer is: Once piloted a Scion tC through the streets of Long Beach to a 15th-place finish without putting anyone in Jeopardy.

Who is Alex Trebek.

Yes, that Alex Trebek. The long-time host of Jeopardy!, who died on Sunday at the age of 80, was a life-long sports fan. In addition to being a season ticket holder to the Los Angeles Dodgers, Trebek was a bit of a car guy. Once owned a 1956 Jaguar XK 140 MC Roadster.

Trebek even gave racing a shot in 2009, when he competed in the Toyota Pro/Celebrity Race on the streets of Long Beach. It was quite a field, including Indy 500 winner Al Unser Jr. and former NASCAR driver (and a former Xfinity Series and Truck Series champion) Johnny Benson Jr.

The field of celebrities included Keanu Reeves, Tim Daly (anybody out there remember Wings?), racing pit reporter Jamie Little and skateboarder Danny Way. All drivers were behind the wheel of identically prepared 2009 Scion tC (read Autoweek’s 2009 review of the car here) machines. 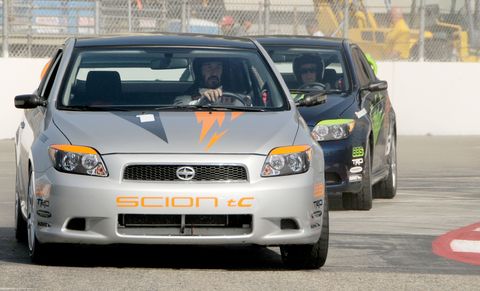 Trebek started 11th and finished 15th in the 18-car field in the 10-lap event on the 1.968-mile course, beating rapper Fonzworth Bentley, Way and Raven Symone (That’s So Raven). Way and Bentley crashed out.

It was no surprise that Unser and Benson finished 1-2.

And Trebek will forever have a listing in the the Racing Reference website. The website lists career records for all of the greats, from A.J. Foyt to Dan Gurney to Mario Andretti to Ayrton Senna … to Alex Trebek.

Alex Trebek will be missed. Any good Trebek stories to share? Jump in the comments section and share.