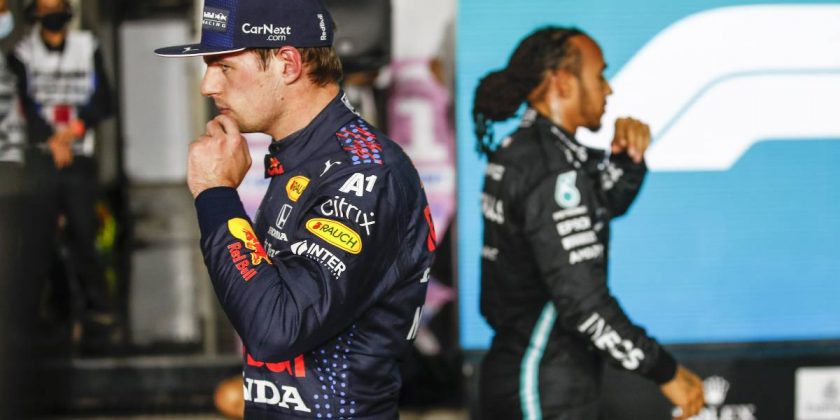 There is no angel and demon in the fight between Max Verstappen and Lewis Hamilton but two devils, says Italian journalist Leo Turrini.

The title fight between the two drivers has been heating up all season and continued to do so last time out in Saudi Arabia where they engaged in a titanic battle for the win.

They twice narrowly avoided touching when going wheel to wheel before somewhat inevitably doing so, with the Mercedes going into the back of the Red Bull.

Despite that, they still finished the race in P1 and P2 with Hamilton winning and drawing level on points with the Dutchman heading into the final round in Abu Dhabi.

The last time that happened was in 1974, but Turrini feels there was much more respect between the title contenders back then than there is between the current protagonists.

“We haven’t seen such a thing since 1974 when in contention were Emerson Fittipaldi and Clay Ragazzoni,” he told calciomercato.com.

“At that time, there was a mutual loyalty that between today’s phenomenons really does not exist. Lewis and Max hate each other, they throw each other low blows on track.”

A standout moment in the 2021 championship 👀#SaudiArabianGP 🇸🇦 #F1 pic.twitter.com/6oFiWo0JU8

Verstappen was adjudged to be in the wrong by the stewards last time out, being forced to move back two spots on the grid for the first Safety Car restart and later given two separate time penalties for his driving when battling Hamilton.

Many feel he is crossing the line and fear he could intentionally take out the Briton in Abu Dhabi because if neither driver scored points, he would win the title as he has more wins.

Turrini does not think there is a good and a bad side in the fight though, feeling both are willing to play dirty in their efforts to beat the other.

“Here, there’s not an angel and a demon but two devils,” he added.

As well as those at the front of the field there were plenty more incidents during the race in Saudi Arabia and many of them caused lengthy stoppages, with it taking a while to clear debris from the track, while various drivers raised safety concerns over the weekend.

All things considered, Turrini does not think F1 should have raced there.

“I thought I was on Netflix by mistake, watching Squid Game, that South Korean show on that game where in the end whoever loses dies…” he said.

“As for the rest, three starts, one red flag, which I’m afraid was premature, Safety Car, mandatory slowdowns for the debris on track.

“I’m sorry for my friend Stefano Domenicali, but it was not a great idea to bring F1 to Saudi Arabia. And not only because of human rights.”