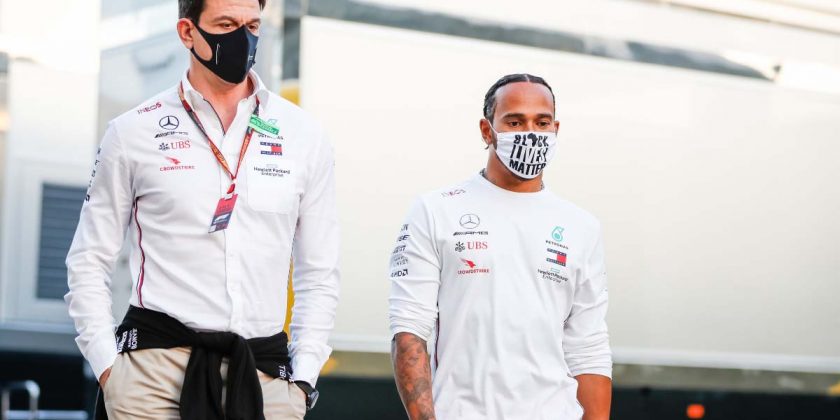 Toto Wolff thinks Lewis Hamilton’s silence since the Abu Dhabi Grand Prix is because he “simply lacks words” due to a sense of injustice stemming from that race.

Hamilton went into the final lap of the 2021 season with track position to claim a record-breaking eighth Drivers’ World Championship, but was overtaken for the race win and the title by Max Verstappen.

Mercedes were infuriated by decisions made during the late Safety Car period by race director Michael Masi that left Hamilton exposed to Verstappen’s challenge on fresher tyres and they unsuccessfully protested the race result.

The team subsequently decided not to press ahead with an appeal as they thought the process was stacked against them.

In the two weeks since the controversial climax at Yas Marina, Hamilton has kept an extremely low profile.

He has been absent from all media, including social, apart from being photographed receiving his knighthood from the Prince of Wales at Windsor Castle and appearing in an end-of-season video at the Mercedes factory that served as a farewell to his departing team-mate, Valtteri Bottas.

The 36-year-old Briton did not even post a Christmas message on social media to his fans, giving rise to speculation he may be considering his future in Formula 1.

Although a report in the Italian edition of Motorsport.com indicated Hamilton will honour the two-year contract he has with Mercedes, Bernie Ecclestone said “I don’t think he’s coming back” following a conversation with the driver’s father, Anthony, whom the former F1 ringleader “sensed he wouldn’t answer a question about his son’s future”.

Wolff, Hamilton’s Mercedes boss, believes the seven-time former World Champion is still reeling from the shock of what unfolded in Abu Dhabi.

“We are all wavering in emotions and Lewis most of all,” said Wolff, quoted by Motorsport-total.com.

“He won the World Championship until the last lap, and then everything is taken away from you from one second [to the next]. Of course you lose faith because you can’t understand what has just happened.

“The silence is there, of course, because he simply lacks words as well.”

Wolff gave an insight into his discussions with Hamilton during the three days when Mercedes were deliberating whether to go ahead with an appeal.

“Lewis was in the office with me and everyone else involved, and we were also in constant contact over those days,” said the Austrian.

The third of those three days was a Wednesday and in the morning Hamilton received his knighthood, with Wolff adding: “In the afternoon, we were back in video calls to decide what to do.

“What I told him before [receiving the knighthood] was that he should take those few hours paying homage to his life’s work so far and his performances, that he should try to take those positive moments with him. I think that’s what he did. You could see that too, how honourable that was for him.”