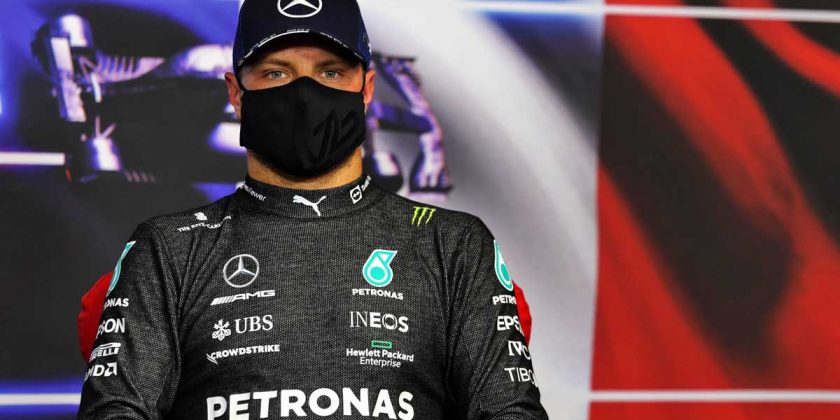 The Finn had topped first practice and been just 0.008s shy of Max Verstappen’s benchmark time in FP2, gaining confidence behind the wheel of his Mercedes at Paul Ricard.

Team-mate Lewis Hamilton will start alongside Verstappen in P2, with both Mercedes managing to out-pace the sister Red Bull of Sergio Perez in qualifying.

But after a solid start to the weekend, the Mercedes driver had higher ambitions than starting third for the French Grand Prix.

“Yes, I hoped for that at least,” Bottas told Sky Italia when asked if he thought he could gain pole position.

“In Q3 probably I did the best lap of all my weekend in the second attempt, while the first wasn’t really good.

“But Lewis in some way managed to find something more, he made some important changes towards my set-up direction and he found something more in Q3. Now I have to see why.”

3rd on the grid for tomorrow 🇫🇷🏁

All focus on the main day 👊

After a torrid weekend in Baku that saw him finish outside of the points, Bottas was happy to be back up to speed in France and anticipates a tight battle on Sunday.

He feels confident about the strength of his Friday and Saturday but, after Verstappen’s increased pace in FP3 and qualifying, Bottas felt Red Bull’s speed was just out of reach of Mercedes on this occasion.

“It’s been a strong weekend and, for sure, a lot better than a couple of weeks ago so the pace has been there,” he said separately after qualifying.

“We’ve seen that it’s going to be close with Red Bull as it was today. Of course, you can’t be too happy being third because it’s been a strong weekend otherwise, but I think Red Bull were faster today.

“I think Red Bull had the edge in a straight line here which made the difference.

“We are definitely fighting for the win tomorrow. We’re between the two Red Bulls, with two cars against one so on strategy, we can be smart and bring the challenge to them.

“Nothing is going to come easy but we’re ready for the challenge tomorrow.”