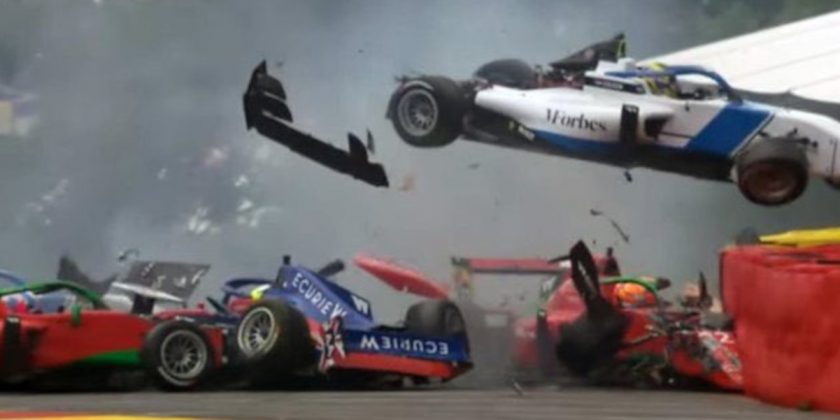 Sarah Moore and Abbie Eaton, two of the drivers involved in Friday’s W Series crash, admit they were lucky to get away “pretty lightly”.

Six drivers were involved in a high-speed crash as the rain began to fall at the Spa-Francorchamps circuit on Friday afternoon.

Two of the drivers, Beitske Visser and Ayla Agren, were transferred to hospital for further checks.

Agren was discharged on Friday afternoon with Visser, having undergone further X-rays on her leg, released later that same night.

She revealed that she had escaped the incident without any broken bones.

Thank you all for your messages❤️ that was a very scary one but I think I had an angel on my shoulder, I’m very sore but luckily I have no fractures🙏 pic.twitter.com/j2AyJzav80

F1 TV Pro is half price for two months! In order to claim this fantastic discount, click the following link and use the promo code SPA50 at checkout!*

*Offer expires at 23:59 on Sunday, August 29. Offer only available on Pro. Customers will need to take out a monthly subscription and this offer can only be redeemed on web. Offer not available in NL, FR or NZ.

Speaking about the crash, Sarah Moore, the first of the six to crash as the rain began to fall, explained her side to Sky F1.

“A little bit sore but grateful that all the drivers are okay and we are all in one piece,” she said.

I kind of took two laps to get heat into the tyres and as I came out the final corner it had just started to drizzle. I knew that if the rain was coming down this would be the only dry lap so I had to go all in.

“I got up to Eau Rouge and turned it and the rear just snapped. From there I was a passenger and there was nothing I could do.”

Abbie Eaton, who along with Visser followed Moore into the tyres with Ayla Agren, Belen Garcaa and Fabienne Wohlwend then hitting the stationary cars, added: “I think I got away pretty lightly.

“It is always difficult when you are the first one or two cars, and a couple of cars behind just spun on the damp track and then we got collected by everyone.”

Friday’s accident is the latest in a string of horrific crashes through Eau Rouge with Formula 2 driver Anthoine Hubert killed in 2019 while Williams reserve driver Jack Aitken recently suffered fractures when he crashed at the Spa 24 Hours.