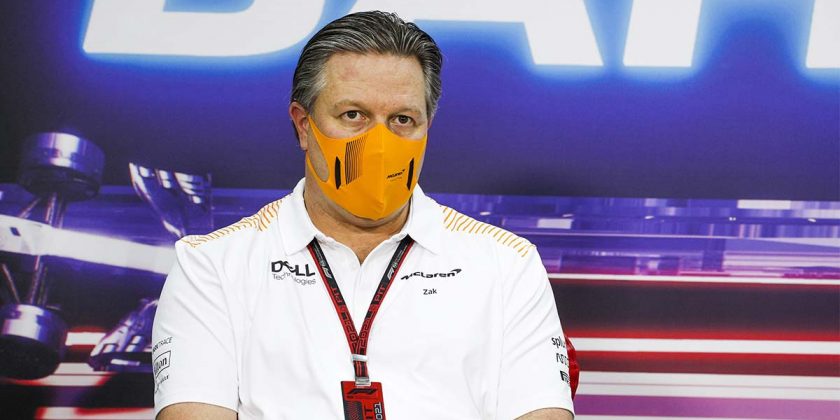 Zak Brown believes the penalties handed out in Austria were “nonsense” and are setting a bad precedent going forward.

Early on in the Austrian Grand Prix, Lando Norris was given a five-second penalty for apparently forcing Sergio Perez off-track when defending his position, while the Mexican suffered the same fate twice later on while battling Charles Leclerc.

It was widely felt, by both drivers and spectators, that the decisions made by the stewards were overly harsh and discouraging hard racing.

Brown shares this view and believes it’s setting a precedent that isn’t good for the sport.

“The alternative now is you’ve set the precedent for all you have to do is get up alongside someone, and then they’ve got to pull over for you. And I think that will become very difficult to go racing that way,” the McLaren CEO told Motorsport.TV.

“I thought it was nonsense. I think ever since I’ve been in motor racing, which is about 35 years now, when you go to make a pass on the outside, certainly on an opening lap, I think it’s ‘passer be aware’.

“For 50 years, it’s been great wheel to wheel racing. But you put yourself at risk of potentially running out of room on the exit. I thought it was great, firm, hard racing. And I think sometimes, we need to let the drivers race.

“We need to make sure they’re doing safe stuff and they are driving within the limits, but from everyone I’ve spoken with, I don’t think there’s a race car driver in the world that didn’t think that was just good clean racing. And if you’re going to make a pass on the outside, or try, you run that risk.”

Brown feels that such penalties are the latest in a long line of measures that have over-regulated the sport in recent times, and that things were better as recently as five years ago in that regard.

“Motor racing has been around a long time and we haven’t had these penalties until recently,” the American added.

“From what I remember of my years growing up following F1, and all sorts of motor racing, the racing has been great, it’s been hard, you’ve had incidents.

“But you know, these five-second penalties because you didn’t give someone enough room, these didn’t exist 5/10/15 years ago, and the racing was just fine. So I’m not sure why we’ve had to kind of over-regulate the on-track activity.

“Certainly if someone’s doing something dangerous [it is justified], but I certainly didn’t consider that move dangerous at all. That was just good racing.”