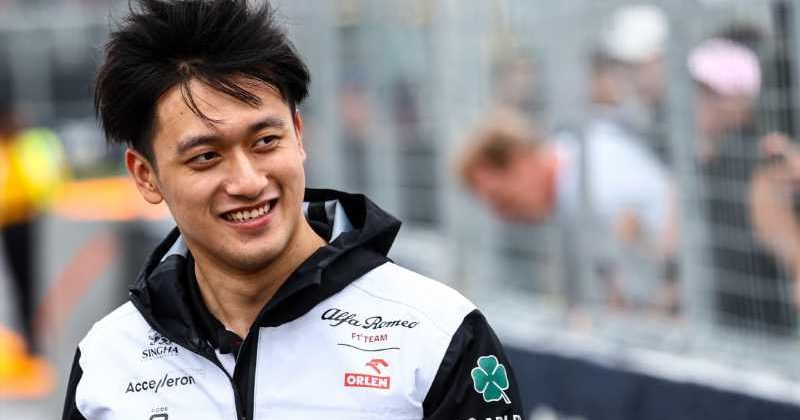 Alfa Romeo’s Zhou Guanyu is a fully-fledged member of the Fernando Alonso fan club, having become a fan during his childhood.

Zhou has spoken out about how he finds it very “weird” to be racing against Alonso, having become a fan of the Spaniard when he was a child.

Zhou made his debut in Formula 1 this year, stepping up from Formula 2, where the veteran Alonso is one of his midfield rivals. The Chinese driver, the first from his country to reach Formula 1, has pictures from his childhood attending the race in Shanghai showing him waving the Alonso flag.

The Alfa Romeo driver was even briefly a sort-of teammate of Alonso, with Zhou being part of the Alpine Academy and testing alongside Alonso as the Spaniard prepared for his return to F1 during the 2020 season.

Zhou Guanyu was waving a Fernando Alonso flag at the 2005 Chinese Grand Prix. Now he's racing against the great Spaniard 💪

“I know [Fernando] Alonso and [Daniel] Ricciardo for a long time because we were basically in the same team in the past and I was an Academy driver,” Zhou explained on the Beyond the Grid podcast, as he was asked about whether the field has been welcoming of his arrival into F1 as the only 2022 rookie.

“People like Sebastian [Vettel] or Lewis [Hamilton], there’s some people I’ve never spoken to in the past. Everyone’s been quite warm and welcoming. Especially in Bahrain, the first time everyone gets to see each other and have a chat with all the drivers. It’s cool to have these people around still because I didn’t expect to be racing with some of the very experienced drivers.

“I remember the first race I watched they were there racing and they’re still here racing! It’s a special feeling, and I really enjoy the on-track battle together.”

Podcast host Tom Clarkson pointed out that Zhou could only be referring to Alonso, with the Chinese driver laughing and explaining how he became a fan of the Spaniard.

“That day, I didn’t know anything about motorsports. I was just there as a fan in general. I saw his race, and I thought he was a very good driver.

“I had that dream in my mind that, one day, I could be a Formula 1 driver. The second year, when the Chinese Grand Prix happened [in 2005], I was more understanding of motorsports and I was holding his flag. Everybody saw that picture on social media.”

Now a rival of Alonso, despite the generational gap between them, Zhou said it’s been strange for him as he’s had to adjust to treating a childhood hero as just another driver.

“It’s quite strange, a weird feeling to be fair,” he explained.

“Because, the first time I knew him, we were together testing, private days at Alpine. The following year, the year he came back to F1, I was able to drive in FP1 in Austria, in his car. That was a very special moment, and I never thought it would happen one day.

“Now, to be racing against him on the same grid, with Alpine one of our main competitors in this very tight midfield battle, the very first race in Bahrain it was very special to hear [his name on the radio].

“We were fighting for that last point until the end of the race so that was a special moment. Hearing all these legendary names like [Lewis] Hamilton, [Max] Verstappen, Alonso and then, now, it just feels like another driver. Back then, it felt very special and seeing them go past, it’s hard to describe the feeling inside yourself.”