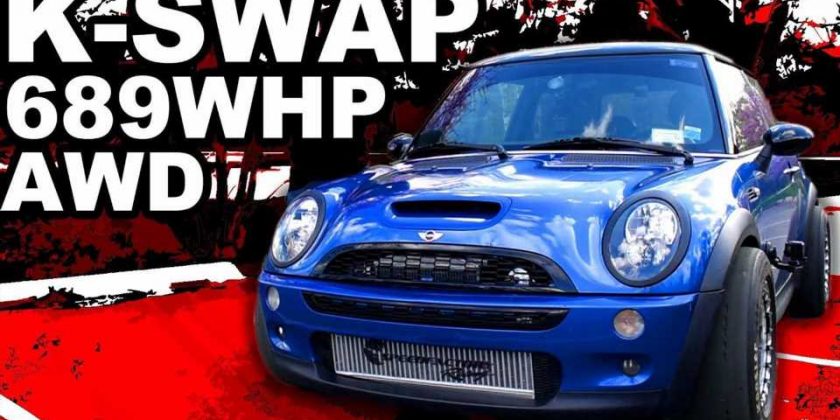 The perfect Mini Cooper does exist.

How would you react if you blew your transmission? For this Mini Cooper owner, it was all part of the plan for this insane Mini build. Under the hood of this Mini Cooper gone are the stock engine and drivetrain in favor of a Honda K-Series engine and all-wheel-drive system from a CR-V SUV. The result is a seriously quick Mini Cooper with more power than its transmission could handle, but that’s ok, the owner has a plan.

What happens when you swap a 2.4-liter K-Series inline-4 engine from a Honda into a Mini Cooper? Based on this video very good things, however, there are a few additional pieces to this unique formula. You will also need a 68-millimeter turbocharger and an all-wheel-drive system from a Honda CR-V to match this insane build.

The resulting 689 horsepower Mini Cooper is a riot on the road and even too powerful for its stock Mini transmission which the owner actually blew while on camera. His reaction was cool, to say the least. “It’s ok I have a dog box at home”, he calmly stated.

With the ability to spin all four Hoosier slicks this one seriously impressive build. Not only did the owner add a completely new engine to his Mini, but he also found a way to make it all-wheel drive. Packing all of this home-brewed engineering into such a tiny and well-executed package is impressive, to say the least.

Based on the smiles this car produces the build was well worth it. Since the video, the owner is already working on a new version of this mad Mini Cooper with a stronger transmission to handle all of the power from this boosted K24 engine and we can’t wait to see it hit the road.