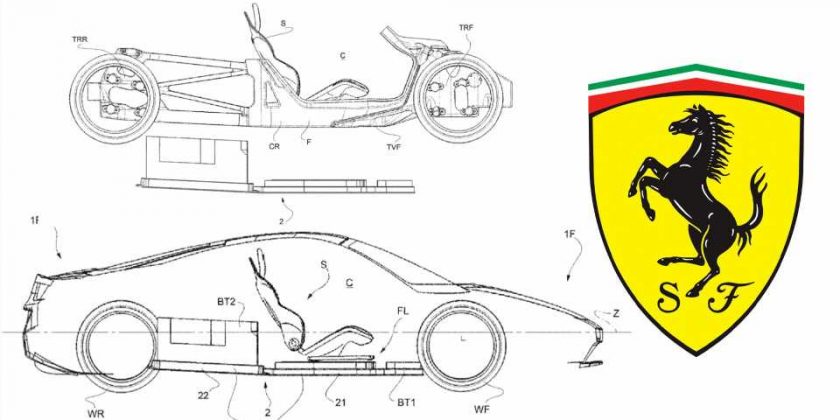 Ferrari, a mythical-status brand known for its contribution to the internal combustion engine and motorsport, told the world a year ago that its first electric supercar was due to arrive by 2025. When the Italian automaker’s CEO announced this, however, no details of this upcoming car were released. Now, thanks to the U.S. Patent Office, we know more about this car than the engineers from Maranello might want us to be aware of.

The patent in question was filed in June 2019 but published just a few days ago, on Jan. 26, 2022. Titled simply “ELECTRIC OR HYBRID SPORT CAR,” it gives us a detailed layout of the automaker’s new electric stallion. Images show a low-slung two-seater in the classic mid-engine Ferrari layout, but as you might’ve guessed, there isn’t an engine in the middle anymore. The whole setup somewhat resembles the Rimac Nevera, although still not quite the same. 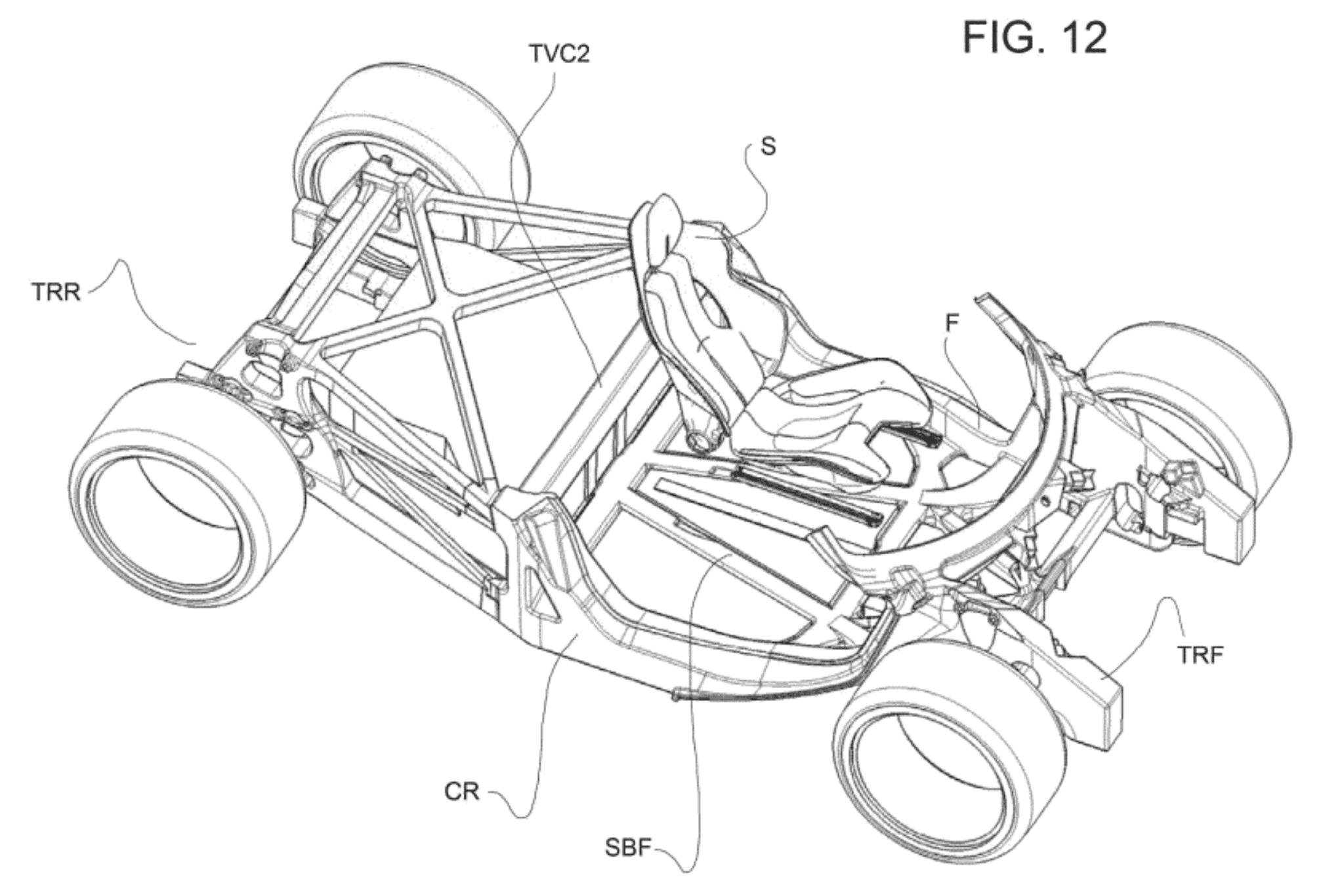 Ferrari’s patent imagery details a huge mid-mounted battery pack of an unspecified capacity. As well as having this large pack, however, it also has a number of smaller batteries located in the floor—as many as three separate units. All of these, including the large midship battery, are mounted to a sort of subframe which bolts up the main tub of the vehicle in question. This would allow the same system to be used in a number of different supercars, and as the patent implies, not strictly in a full EV but a hybrid vehicle as well.

In a hybrid layout, you might think the large mid-mounted pack would be swapped for an engine with the smaller floor-mounted batteries staying where they are. That’s not the case according to the patent, though. The official document states that “Even though the [illustrations] do not show any heat engine, it can be housed in the front part of the car or behind the rear battery pack… thus defining a configuration in which the rear battery pack is interposed between the heat engine and the seats of the car.” Yes, it seems like that big center pack is here to stay. This thing in hybrid form would likely be stuffed to the absolute gills. 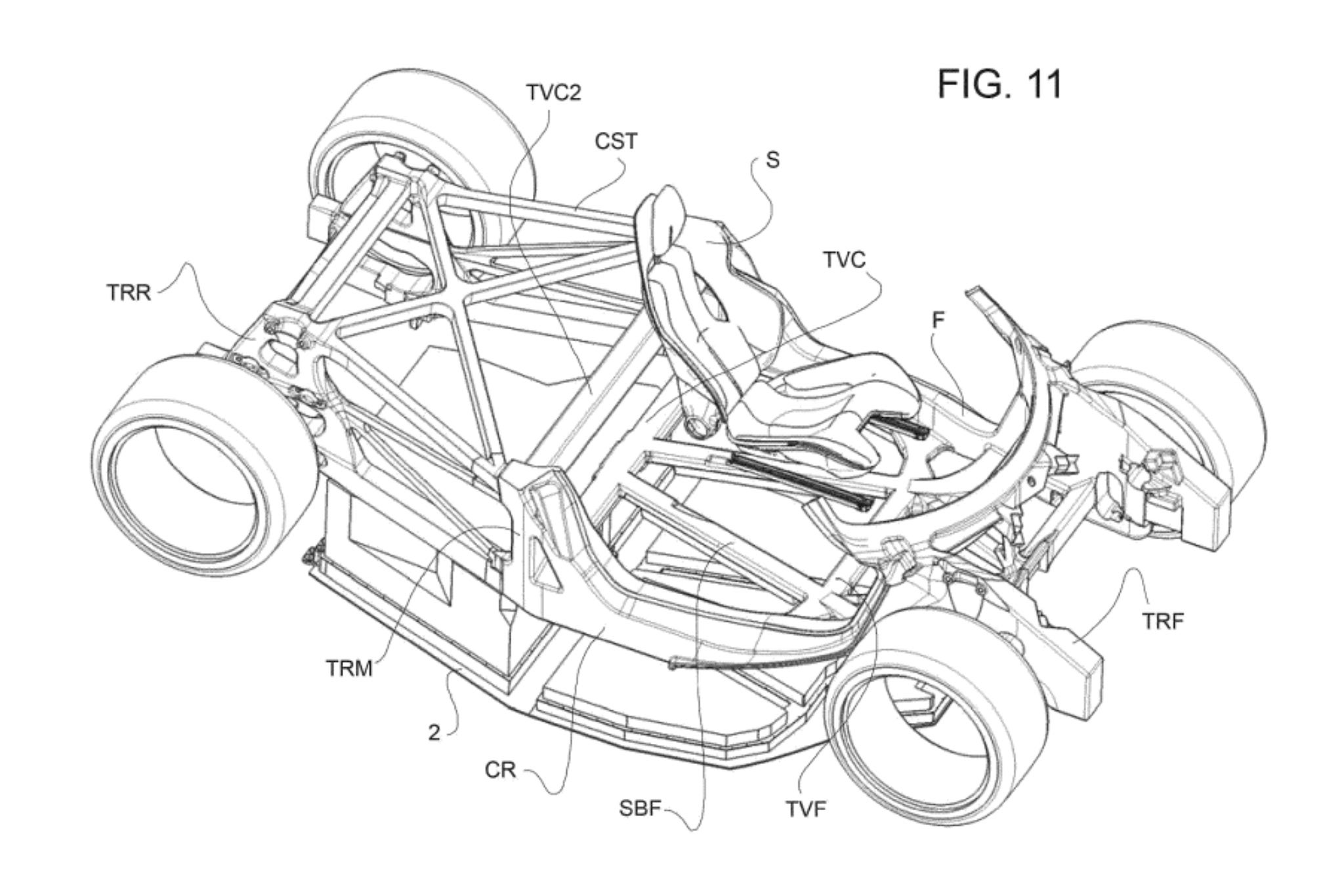 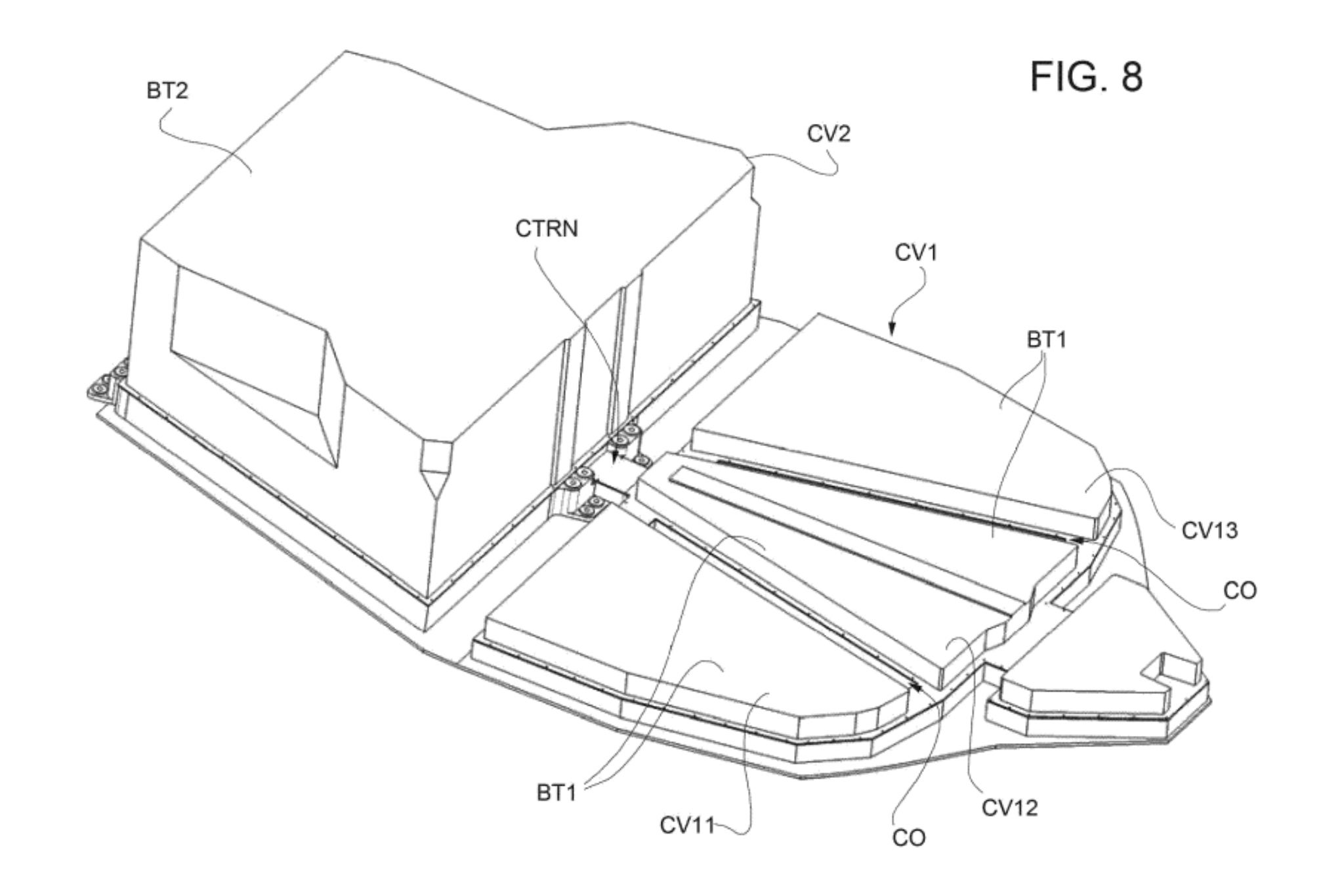 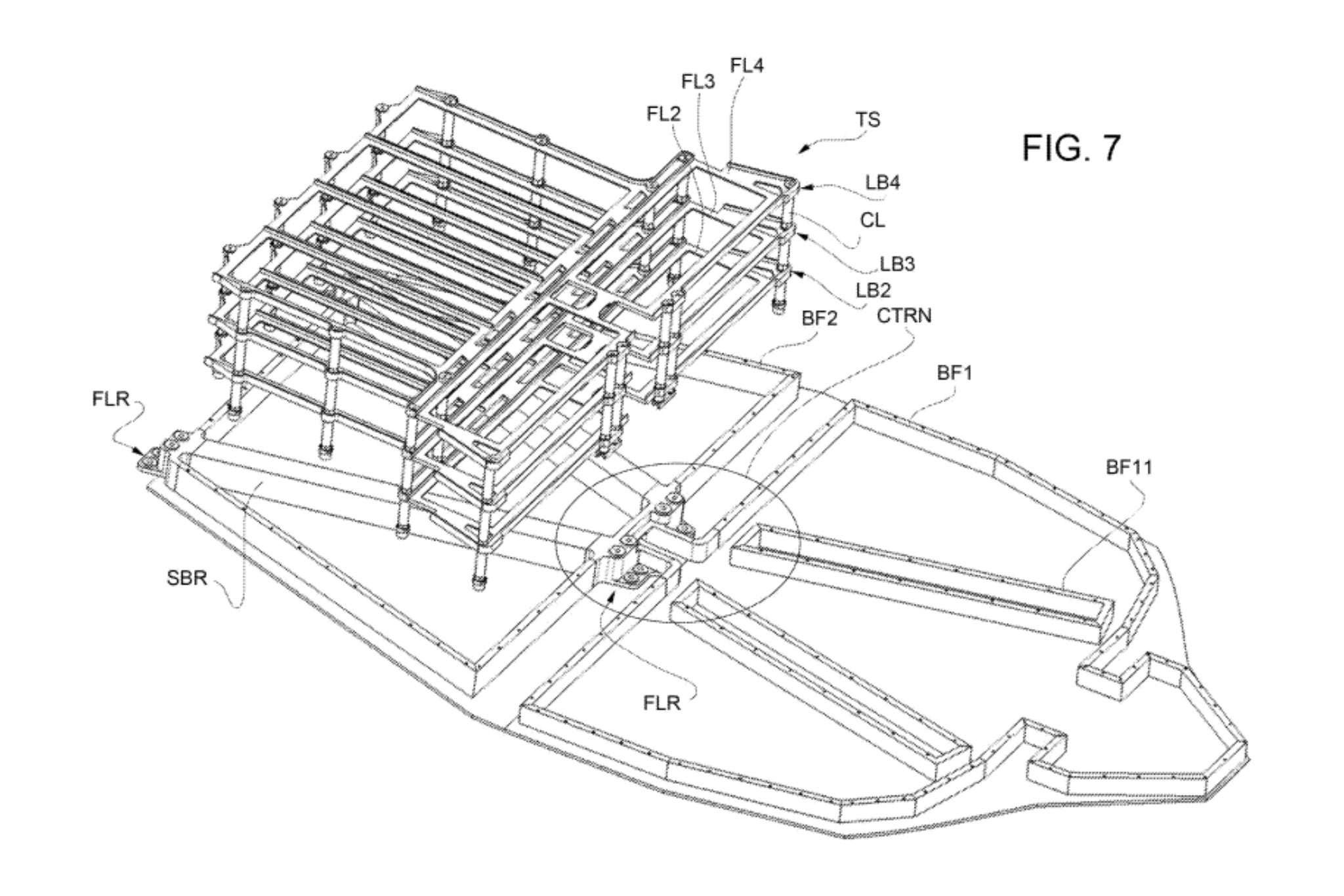 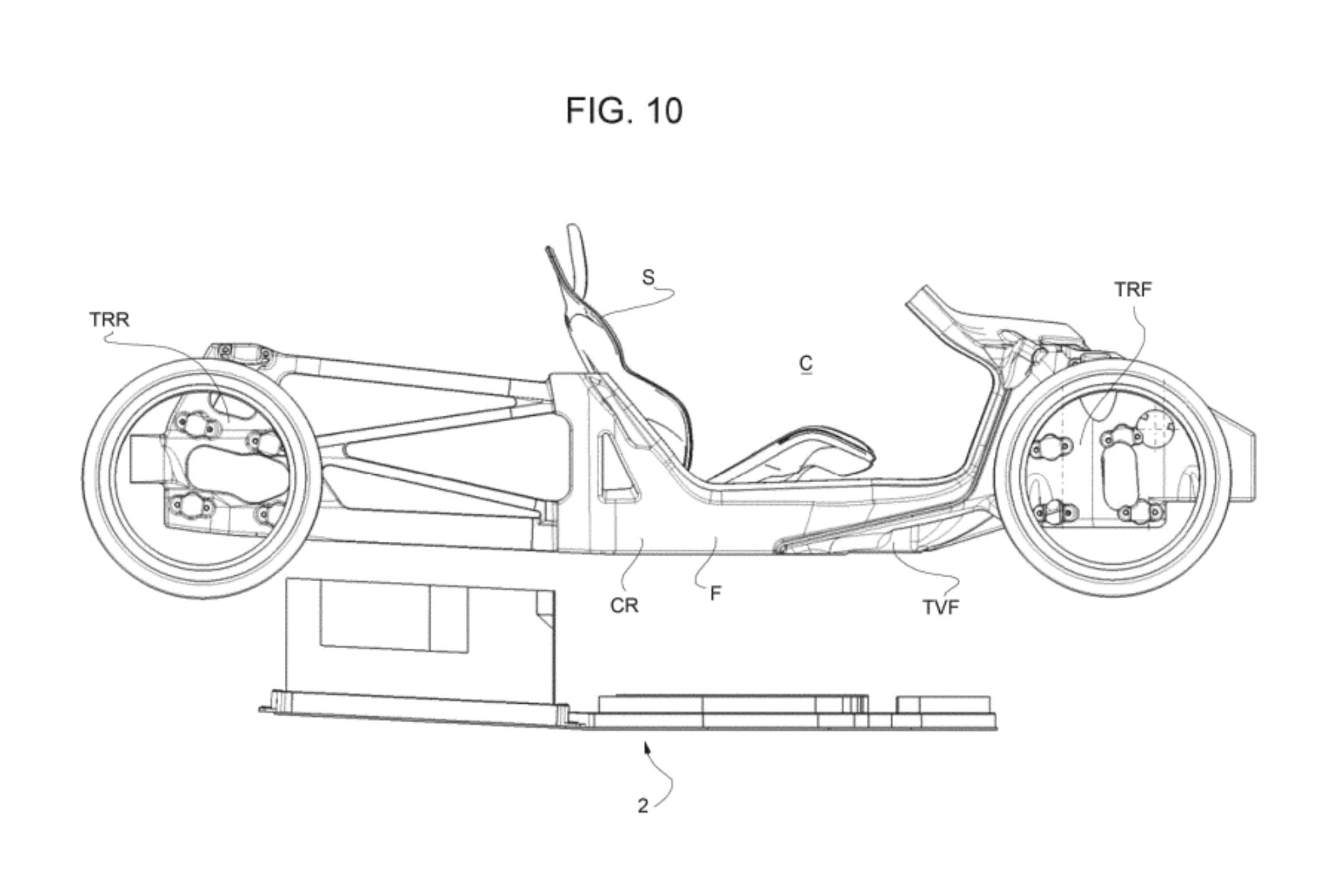 The rear portion of this subframe where the large battery is house is angled slightly upwards, and Ferrari says this is to produce “negative lift” or downforce at the back of the car. This area, interestingly, might also be used to cool the batteries. The patent states “advantageously, the fact that the battery packs are stacked together parallel to the platform allows for an ideal exchange of heat with the platform.” So basically, Ferrari sees this area as not only a part of vital airflow to produce downforce, but also to cool the batteries. The strakes of a diffuser could perhaps be a perfect structure to extract heat out of the battery, like a huge heatsink.

Ferarri sees the floor-mounted battery packs to be an ideal place to use cylindrical battery cells, however, the rear pack, the patent states, could consist of any type the automaker prefers. “The fact that the batteries housed in the floor are cylindrical does not imply that the rear battery pack… also consists of cylindrical batteries,” it states. “All types of cells, namely cylindrical, prismatic or pouch cells, can be adopted.” This is a good thing, the patent claims, because certain types of cells are better at draining energy quickly, while others that may be more energy-dense cannot discharge as rapidly as may be desired. 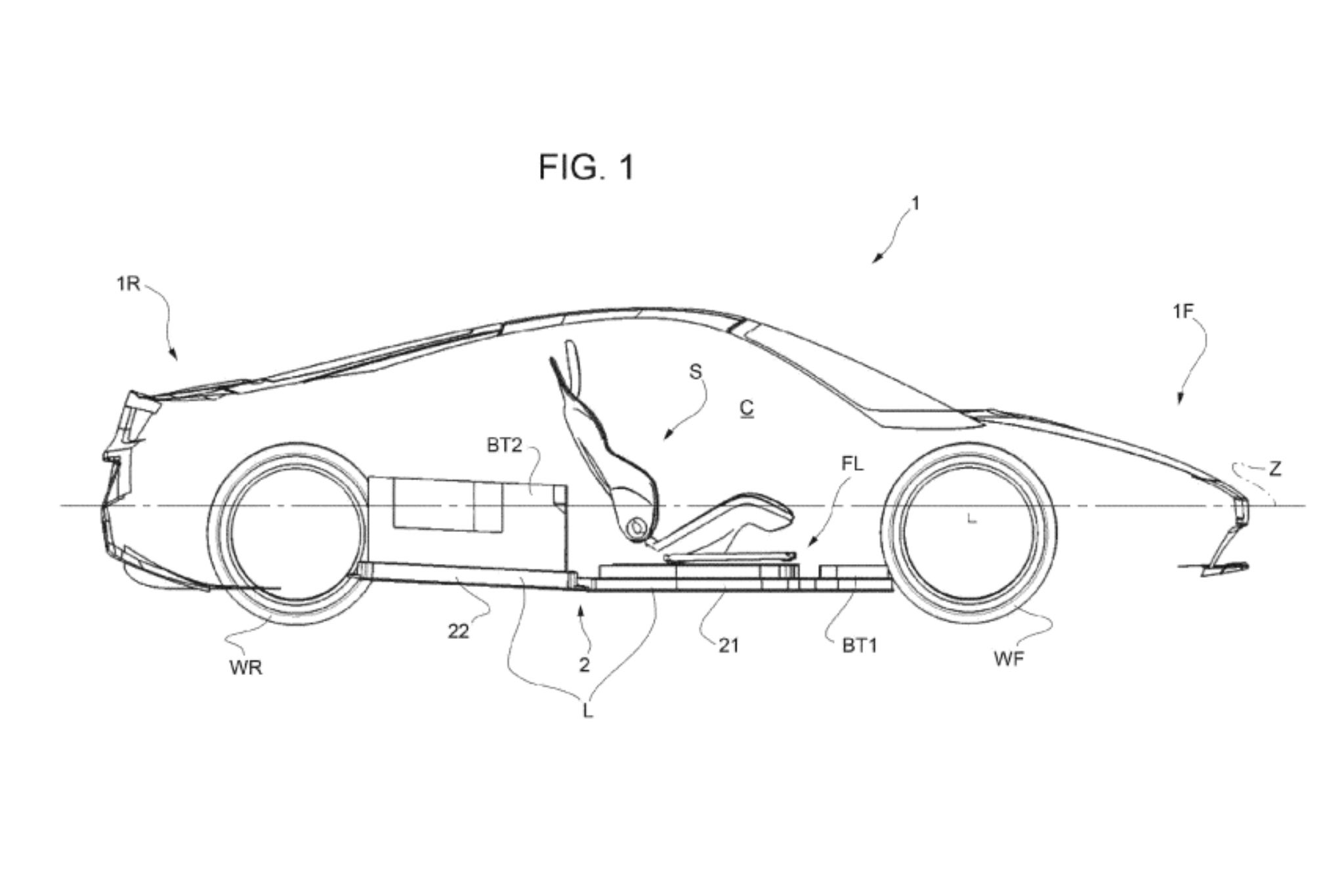 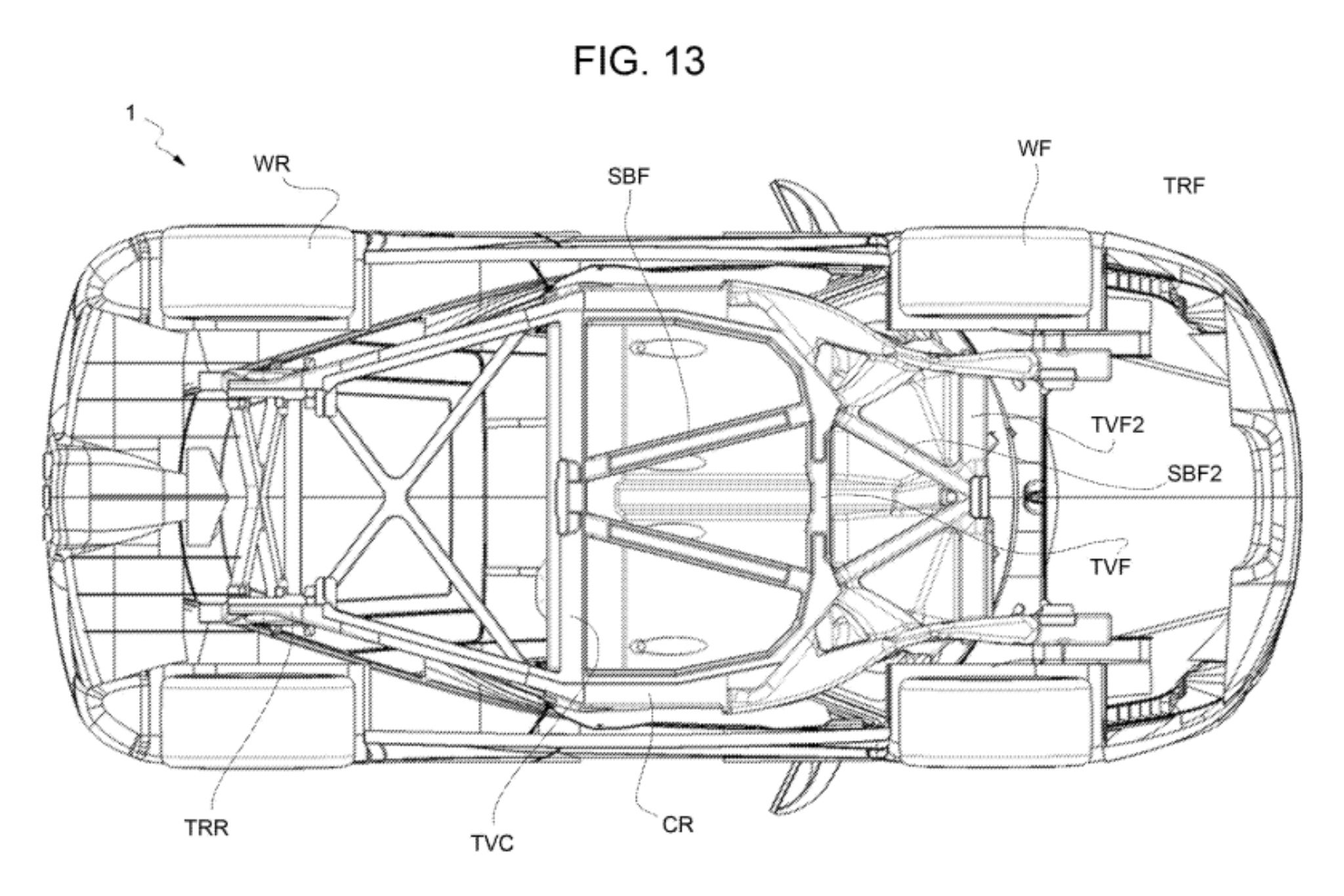 The documentation also shows a few loose aesthetic interpretations of what this vehicle might look like, though these are usually not representative of a production model unless the automaker explicitly says so. Vehicle aesthetics are typically patented much closer to a vehicle’s reveal date, while mechanical systems like these could be published years before a car hits the streets. Looking closely, the car from the top view has exhaust tips reminiscent of current V8 Ferraris, for instance. It’s very likely the aesthetics the automaker lays out in this patent are taken from an existing model.

All of that being said, however, this is still a very interesting development. Before this patent, we knew practically nothing about Ferrari’s first electric supercar. We still don’t know things like the output of the drivetrain or the size of the batteries, but something is always better than nothing.

The automaker currently makes the hybrid SF90 Stradale, which is bizarrely eligible for a tax credit in the United States, and that car uses a layout that varies considerably from what’s displayed in this document. We’ll keep an eye out for any other developments before the car launches in 2025, but for now, this is a lot to absorb. Yes, an electric Ferrari is really coming, and yes, it could be a lot like what we’re seeing here.