Manhart took a brand new M2 Competition and turned it into a monster.

Ever since the BMW M2 made its debut back in 2016, it’s gotten nothing but praise from enthusiasts and journalists alike. It may not be the freak of nature that was the 1M Coupe, but it’s at least a fun and back-to-basics compact sports coupe that harkens back to the E46 M3. And for 2019, BMW has released the M2 Competition, an M2 with the heart of the M3/M4.

If you weren’t already aware, the new M2 Competition gets a hefty power bump from 365 horsepower to 405 thanks to a wonderful engine swap. Gone is the original M2 N55 3.0-liter inline six-cylinder engine and in its place sits the S55 3.0-liter six-cylinder engine from the M3/M4. In this video, you can watch automotive vlogger Shmee150 pay a visit to Manhart Performance in Germany to check out the tuner’s newest iteration of the M2 Competition, dubbed the MH2 550.

The Manhart version now has the highest horsepower count – 550 horsepower – among its competitors, which includes factory machines like the Audi RS3, Mercedes-AMG CLA45, and Porsche 718 Cayman GTS. In traditional Manhart manner, they have tampered with the M2 Competition to demonstrate what a little tuning can do to an already great platform. 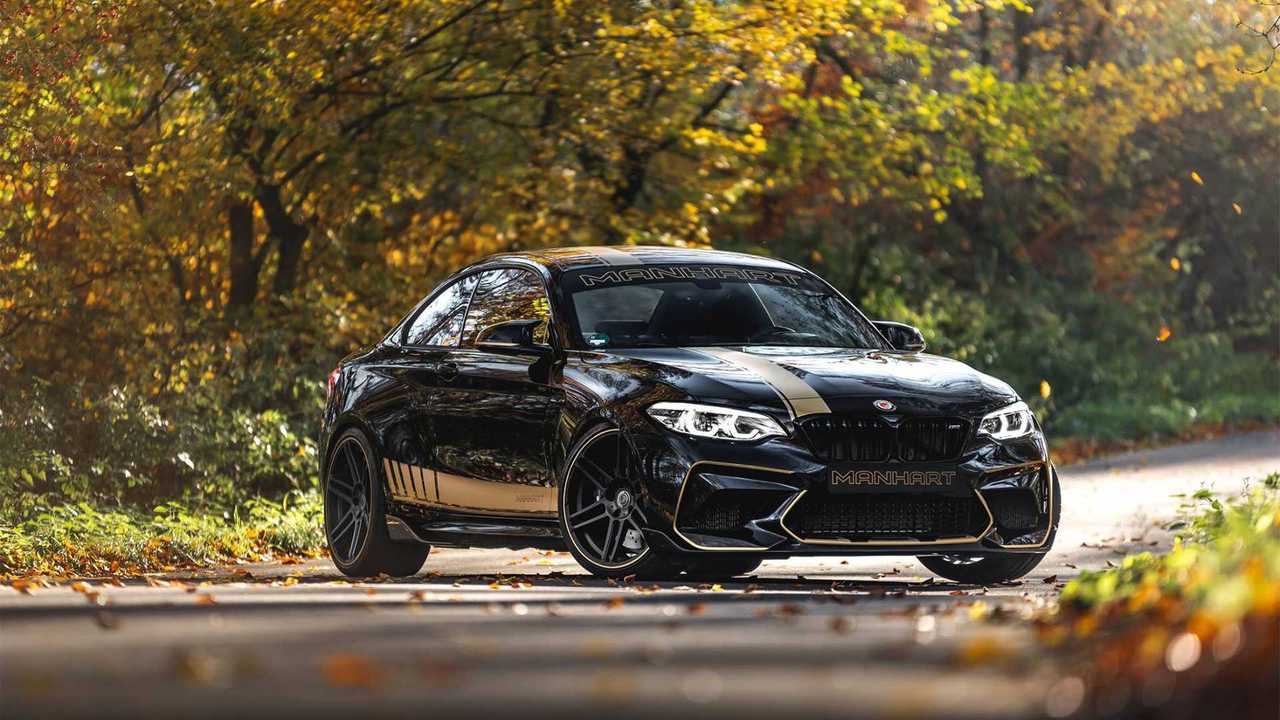 Design-wise, the first thing you notice is the signature Manhart exterior styling with gloss black and gold accents and stripes. Other than that, the M2 Comp is factory-looking except for the Manhart exhaust system with carbon tips (turn up your volume while watching the video to hear them sing). The car’s ride height has also been lowered by 0.98 inches thanks to KW lowering springs. Finally, a set of 21-inch black wheels with gold accents give the MH2 550 a wider and sportier aesthetic.

The interior of the MH2 550 is pretty much bone stock except for the Manhart badge that replaces the original BMW bit on the steering wheel. Looking at the engine bay, everything seems to be unmodified from the factory and that’s because nothing has been touched. So how did Manhart manage to achieve 550 hp and 590 pound-feet of torque? Mostly thanks to some good old remapping of the ECU to unlock the potential of the S55. That much power and torque in the compact body of the M2 has got to be a hoonigan’s dream come true.