When we venture into the land of performance, we find a great many ways to improve it. In previous adventures with our 351 Windsor crate motor, we tested a number of different bolt-ons, including carburetors, intakes, and even headers. We also dabbled in that amazing, performance-enhancing chemical compound known as nitrous oxide. With both bolt-ons and the bottle behind us, it was time for the last of the three “B”s: boost! Not to knock either of the other two routes (our nitrous story will come out of sequence), but there really is nothing like boost to seriously enhance power production. We just tickled the crate motor with a little boost, and managed to increase the power output by more than 150 hp! The great thing about boost is that even at moderate boost levels on a mild motor, it’s possible to increase the power output by 30 to 40 percent. Crank up the boost and add intercooling, and you can easily double (or triple) the power output. With this potential in mind, we decided to apply boost to our modified Ford crate motor. 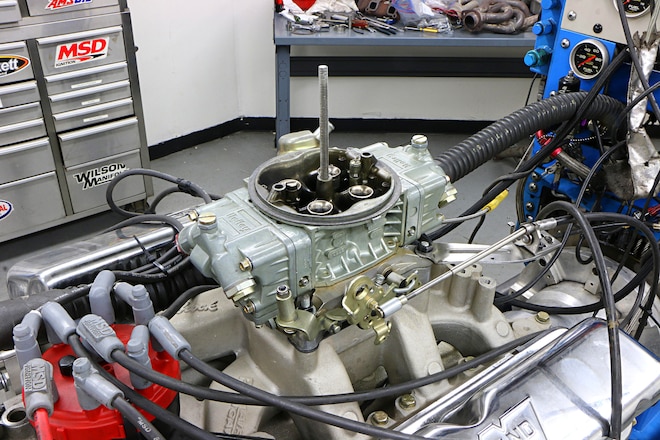 Loyal Car Craft readers should certainly recognize our fancy Ford test motor. After successfully testing bolt-ons, we figured boost was the next logical step. Looking at what we knew about our 351 Windsor, the crate motor seemed tailor-made for the forced induction. The stout Sportsman block ensured plenty of strength, while the forged (dished) pistons offered a boost-friendly static compression ratio. Originally rated at 385 hp by Ford, the 9:1 assembly had long since been modified with a change in cylinder heads. Sometime in the last decade or so, the original GT-40 heads had been replaced by a set of aluminum Holley heads. The camshaft was still a mystery, but the motor had proved itself eager and ready to run in previous testing, eclipsing 560 hp with the aid of a Sniper nitrous system. Additional components employed on the crate motor included a 28-ounce damper from Speedmaster, an MSD distributor, and aluminum roller rockers from Comp Cams. Run with an Edelbrock Performer RPM Air Gap intake, 750 Ultra XP carburetor, and long-tube headers, the 351W produced peak numbers of 420 hp at 6,100 rpm and 429 lb-ft of torque at 4,300 rpm. 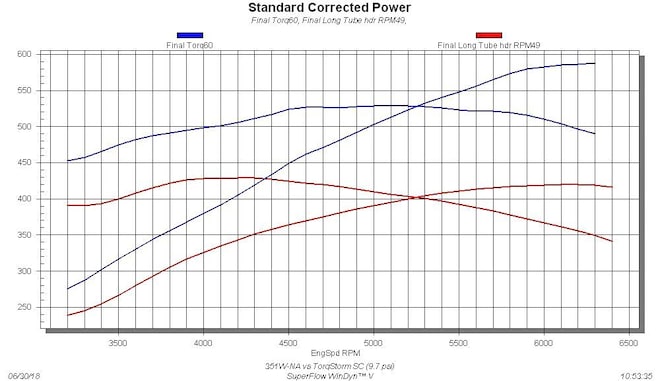 Boost for our mystery-cammed Ford came courtesy of TorqStorm. Originally designed for a 5.0L (302) Ford application, the centrifugal supercharger offers billet-aluminum construction, a proprietary ceramic bearing system, and coating of internal components for temperature and wear control. Though we had no intention of taxing the limits of the TorqStorm blower, it’s nice to know it was capable of supporting 700+ hp on the right application. The supplied kit featured the supercharger, mounting bracket assembly, and pulley combo. The blower and crank pulleys were combined with a blower belt, tensioner, and new low-profile carb hat. The kit also included things like couplers, tubing, and a blow-off valve to connect the supercharger to the carb hat. Run on the 351W, we replaced a few of these components to improvise their use on the taller-deck Windsor. Installation was beyond simple, as the self-contained oiling system eliminated the need for an oil supply or drain back. Because the 351 features a taller deck than the 302 and was run with an aftermarket damper (from Speedmaster), it was necessary to space the crank pulley out with ½-inch nuts (see photos) and purchase a longer eight-rib blower belt. 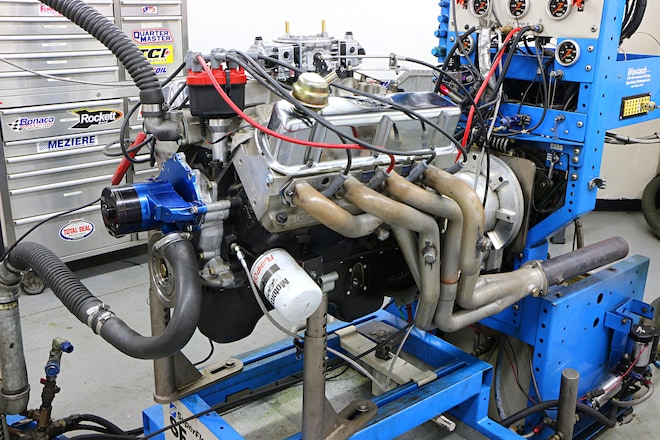 After running the modified 351W crate motor in normally aspirated trim, we installed the TorqStorm supercharger, but not before making a few changes. Because we had it on hand from previous testing at Westech Performance, we also took the liberty of replacing the 750 Ultra XP carburetor with a dedicated blow-through carb from CSU. The CSU carb features a number of modifications that included adjustable, boost-referenced power valves. The modified Holley was also combined with a CSU carb bonnet. The supercharger was configured on the dyno without the benefit of a blow-off valve, something included in the kit. Blow-off valves are always a good idea to help eliminate the build-up of heat in the discharge tube and eliminate the blower-damaging pressure spikes that occurs when lifting off the throttle at high rpm/boost levels. The CSU carb hat was configured with a fitting to supply boost to the fuel pressure regulators, which increased fuel pressure (to the carb) in proportion to boost. Equipped with the supplied crank and 3.25-inch blower pulleys, the TorqStorm-supercharged 351 produced 588 hp at 6,300 rpm and 529 lb-ft of torque at 5,100 rpm at 9.7 psi. Thanks to those big winds from the TorqStorm, the power output of our Windsor soared by 168 hp and 100 lb-ft of torque. 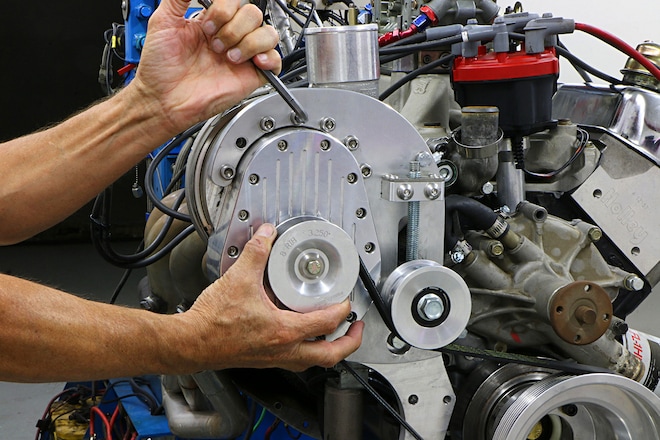 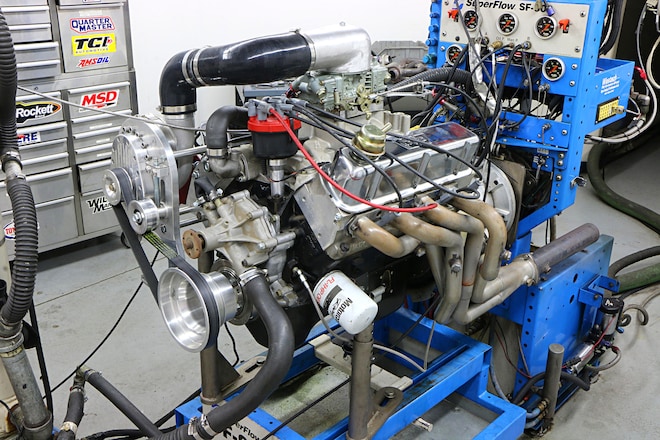 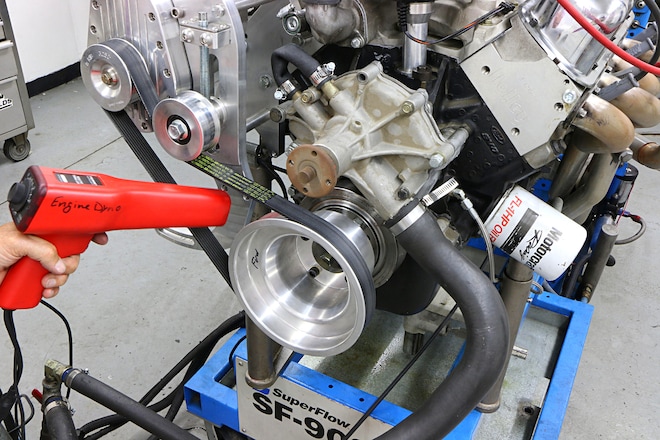 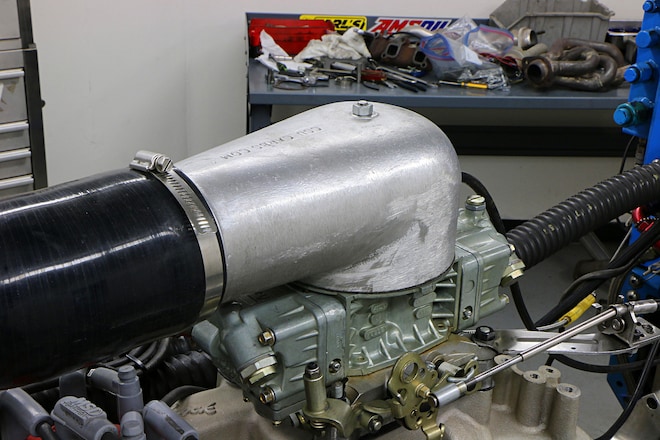 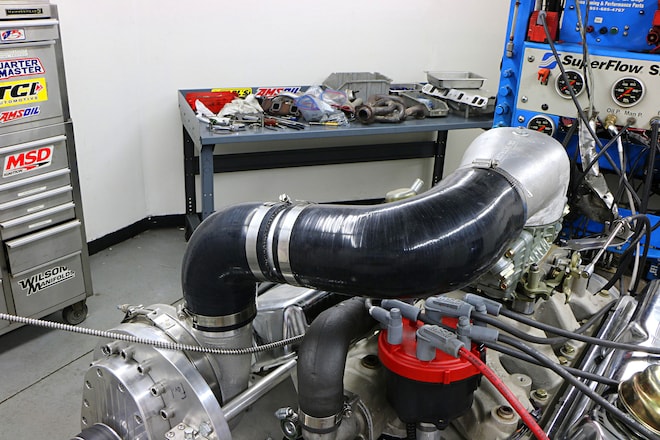 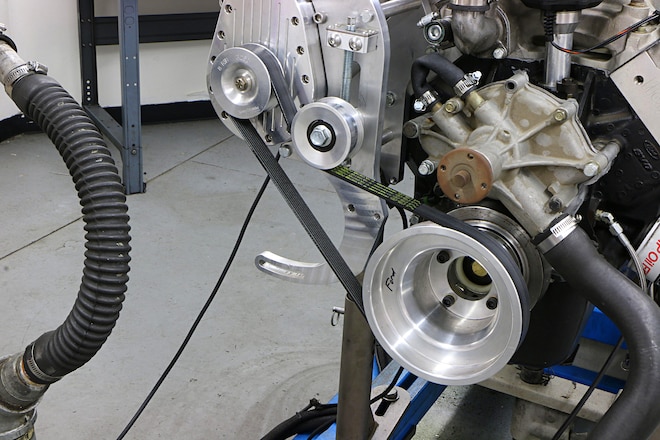 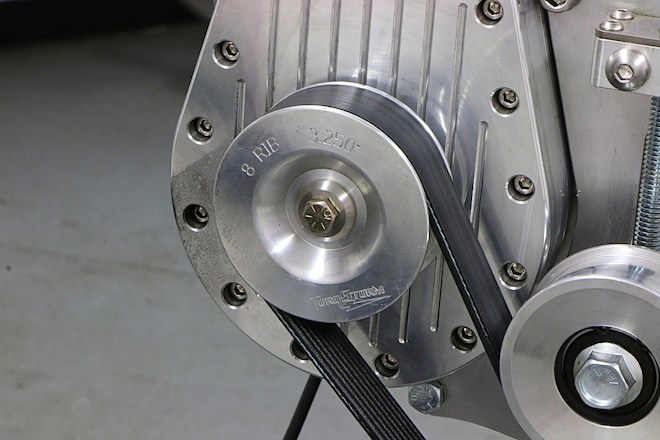 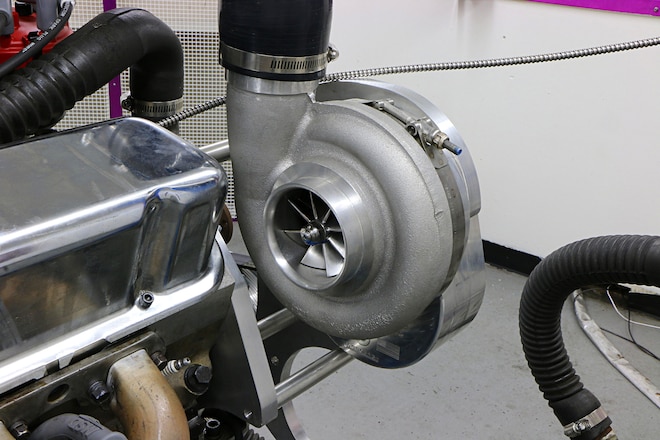 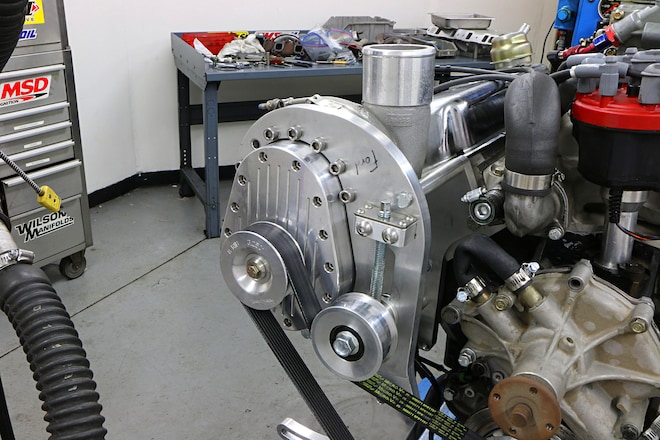 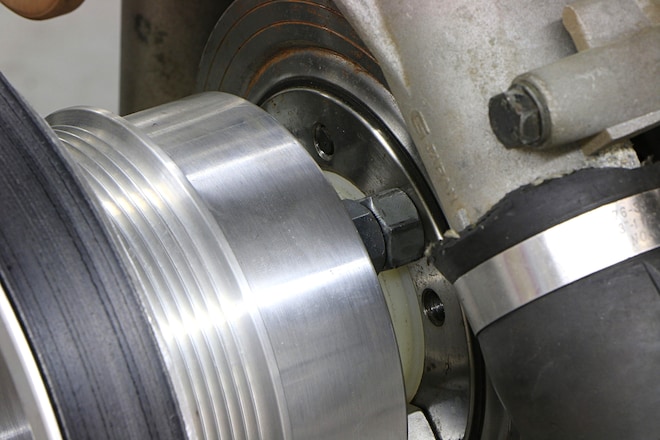 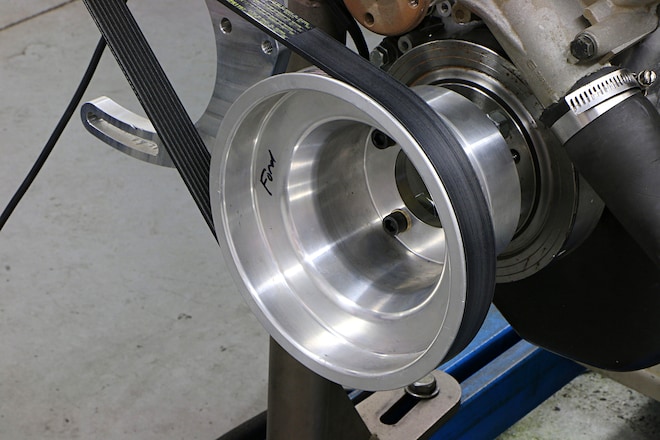 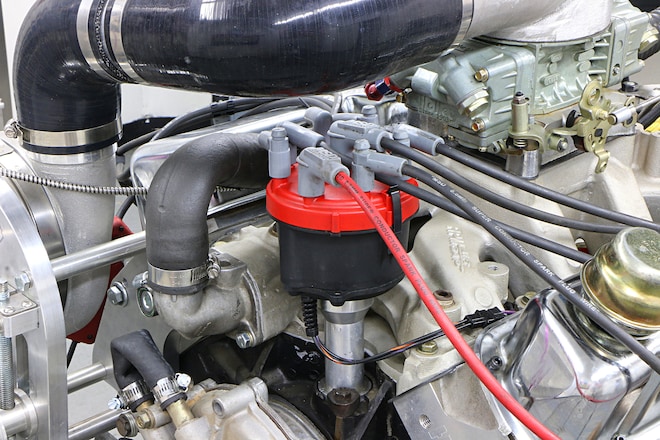 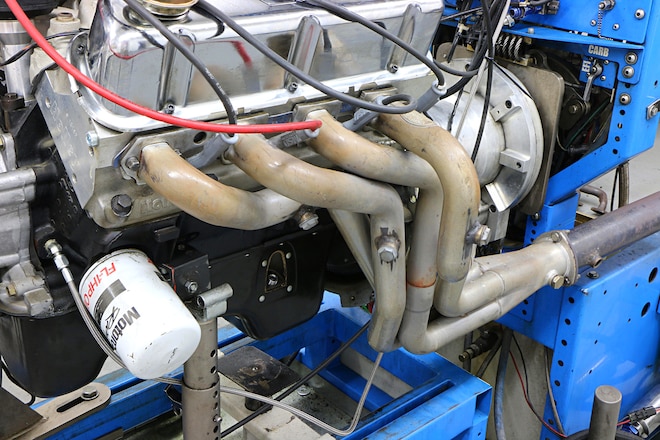 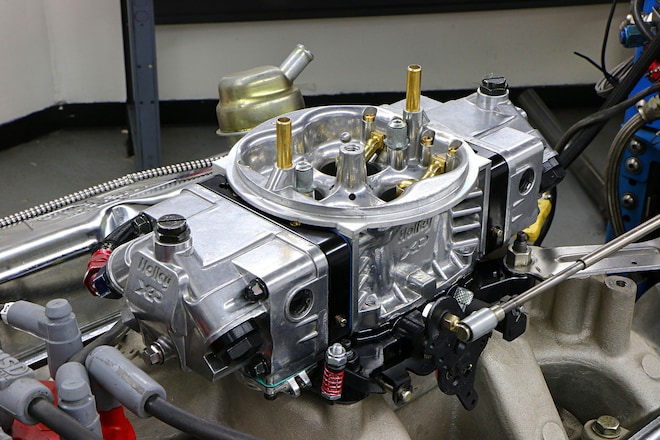 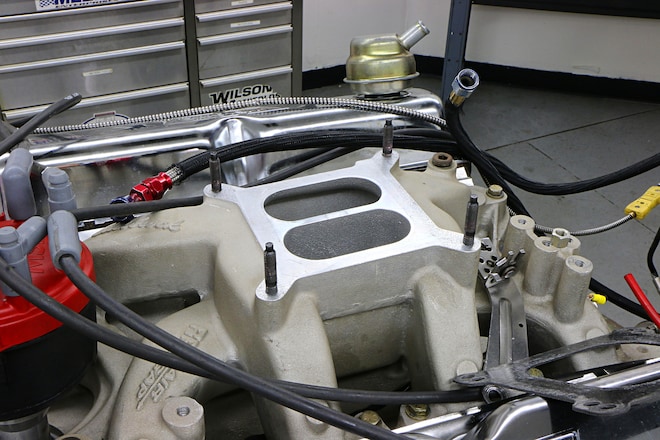