Love him or hate him, you can’t say Elon Musk doesn’t have a great sense of humor. Dive into that big Tesla central display, poke around the Easter Egg screen, and you get all kinds of fun options: More Cowbell, Mars Rover, and something that resembles a primitive version of Microsoft Paint. That’s all cute, but the best Easter Egg is somewhere else, hiding in plain sight, and it saved my life on a brisk and lonely night during Monterey Car Week.

Yes, every Tesla comes with free housing. And I’m not talking about the frunk.

I’d like to say every Tesla comes with an apartment, but it’s really the world’s second best temporary lodging, right after a wealthy friend’s spare bedroom. Sooner or later, you have to leave. How did I discover the holy grail of Tesla Easter Eggs? I’d like to say it was a hack, but that would suggest skill rather than ingenuity and desperation, which would be a lie.

It all began two years ago during Monterey Car Week.

I love Car Week. If you’re a car person, it’s one of the best events in the world. But there’s a major problem. It’s in Monterey, and there are very few places to stay, at any price. If you’re a top-shelf automotive journalist, B-class influencer, or C-level celebrity, a car manufacturer will pay for your five star hotel, your airfare, and tickets to private events like The Quail, which start at $950. The whole package is really a paid vacation worth $10,000. If you include the oysters, cars, chauffeurs, and open bars, it’s probably more like $15,000.

Alas, there are only so many paid vacation slots to go around, so if you cracked one too many jokes about the last model from [insert car car manufacturer here], you’re not going for free.

I’m fine flying coach. I’ll find a way to expense it. I can get press passes to any event. But lodging?

Welcome to the nightmare of Monterey Car Week. Here’s what the Expedia hotel map looks like for 2019. Yes. 2019. 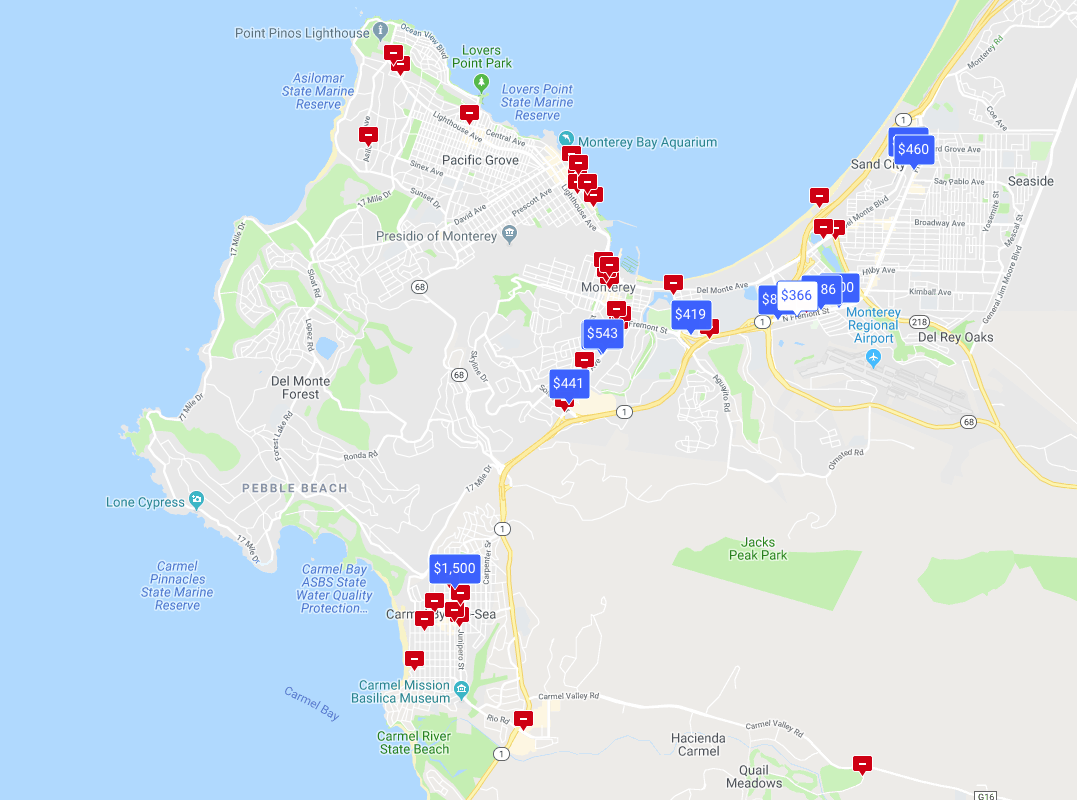 Almost everything is sold out already. There’s a few places left, from $441-$1500/night. I know what you’re thinking. What if I stay further away? 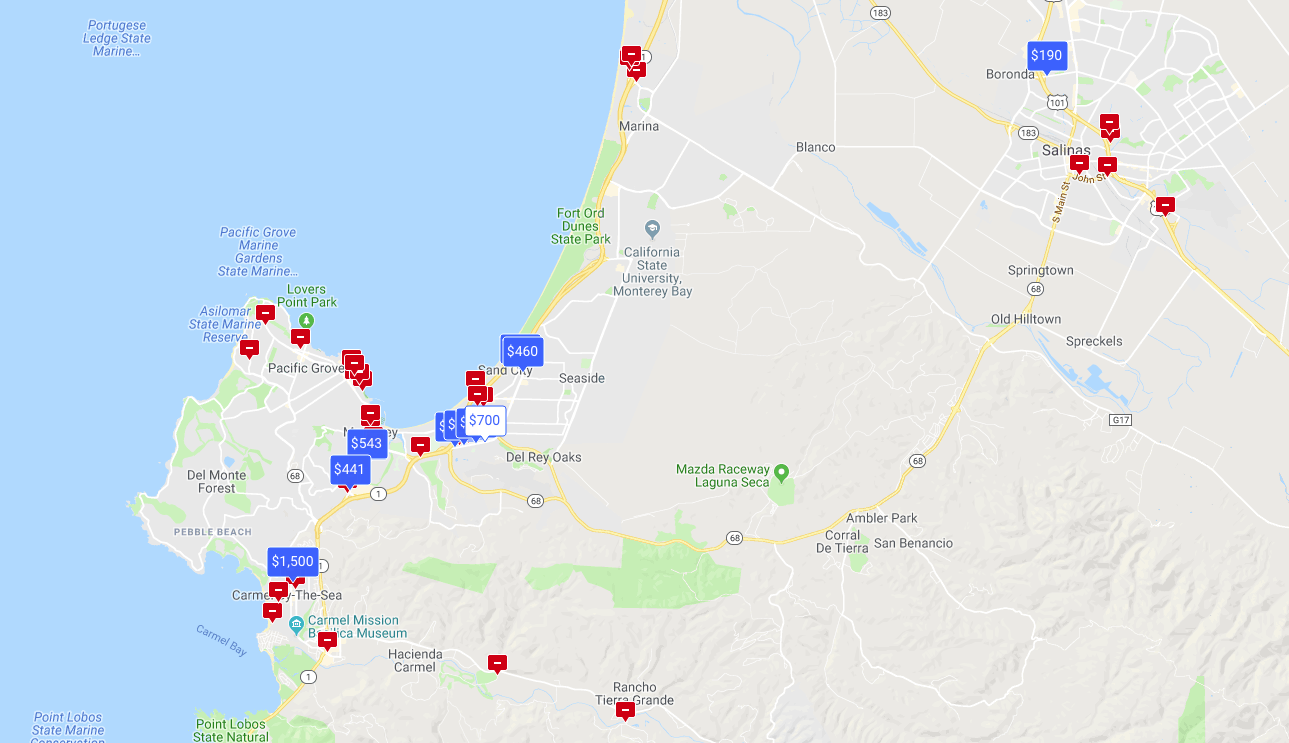 Only $190/night in Salinas, 1.5-2 hours away from Monterey during peak Car Week.

One year out, there’s a motel in Salinas for $190/night. But there’s a big catch. It’s 25 miles away from almost all of the events you’d want to attend. Twenty-five miles may not seem like much, but Car Week brings traffic to a standstill. What normally takes forty minutes can take two to three hours.

Back in 2016, I didn’t have the wisdom I have today. I booked a room in Salinas, checked in and attempted to drive into Monterey. Never again. You haven’t seen traffic until you’ve been in a row of brand new wrapped Lamborghinis, vintage Ferraris and pre-war French cars even I couldn’t recognize, all of them inching forward at 1 mile an hour. The smell. The barking. The rumbling. The leaking. And that’s just the owners.

Are you scared of self-driving cars? You will beg for them after one day in Car Week traffic. Unless you’re in a show car, which is the whole point of going to Car Week. I was in a Tesla Model S 90D, which has many huge pros, and one big event-specific con. The biggest pro is that every Tesla comes with arguably the world’s most advanced semi-automated driving system: Autopilot. I’ve posited that Cadillac SuperCruise is better in many ways, but that’s not true during Monterey Car Week. Tesla Autopilot will engage and re-engage in the worst traffic conditions. SuperCruise? Not so much.

That’s the pro. But what about the con? You know what it is. It’s charging during Monterey Car Week. Charging a Tesla is fairly easy the rest of the year. Charge at home. Charge at work. Charge at a Supercharger. But that doesn’t work during Car Week. If you think booking a hotel is a problem, try finding one that’s both affordable and has what Tesla calls Destination Charging. Slower than Supercharging, it’s great…if you can leave your Tesla plugged in overnight. Besides, if you’re getting back at midnight and leaving before dawn—which is the point of Car Week—it’s just not fast enough.

Why wasn’t I in an AirBnb? Because I couldn’t find one with parking and fast charging. By fast charging I mean anything better than an AC outlet, which is glacial.

I needed Supercharging, which remains Tesla’s ace in the hole.

By the second night, I knew I needed more power. My car week schedule was full. I did the math. If I drove to Salinas and back every day with multiple detours for events, my state-of-the-art Tesla Model S 90D wasn’t going to finish out the week.

It was getting dark. I was tired. I was hungry. Free dinner was waiting for me somewhere, but it was charge now or range anxiety until I did.

Luckily, the Tesla store in Seaside, just a few miles from downtown Monterey, had a Supercharger. 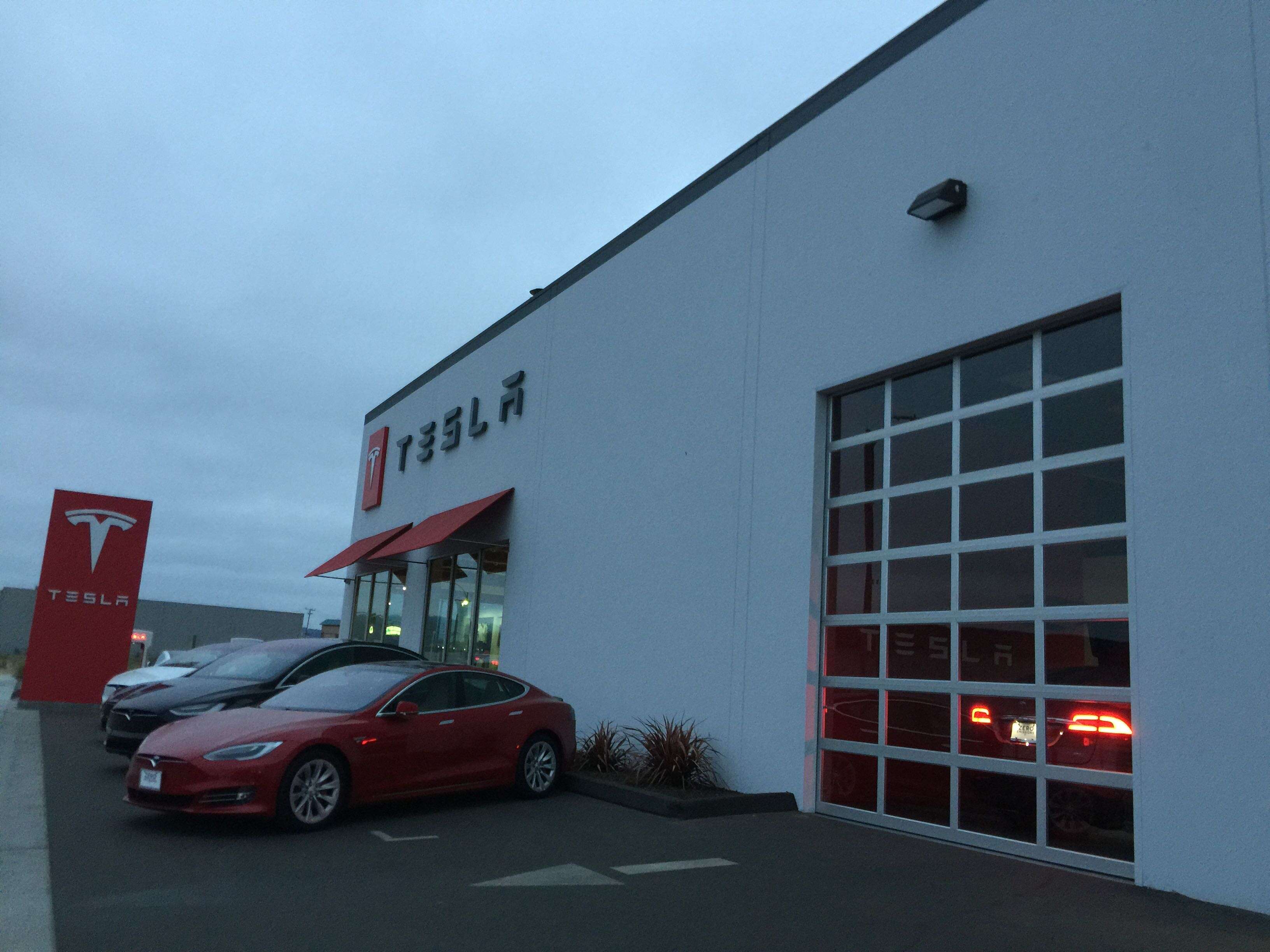 The Tesla store in Seaside, California.

Supercharger spot 1A, which I’d been told is faster than the others, was taken. I took 1B, plugged in, reclined my seat, and fell asleep. 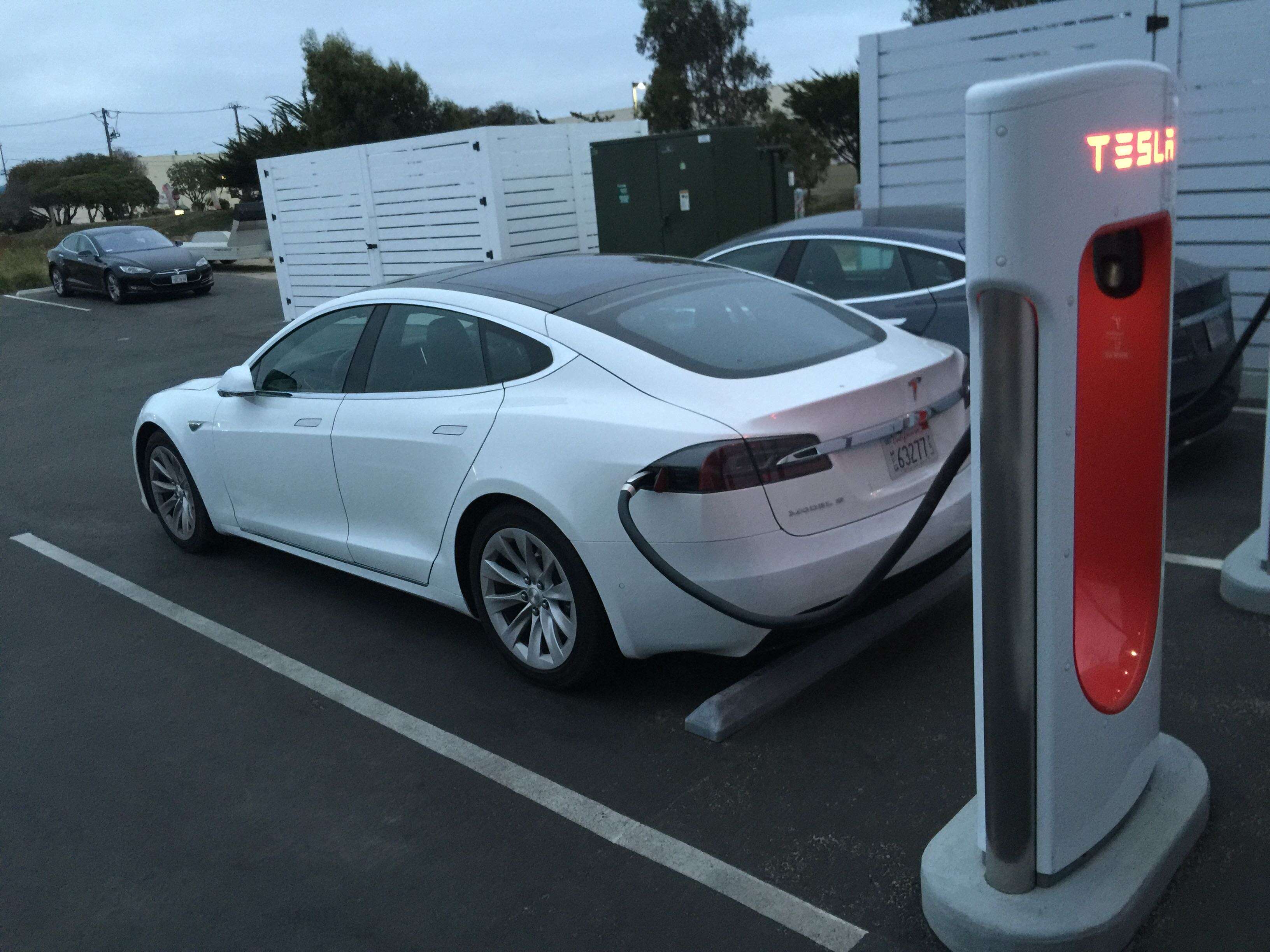 I woke up four hours later, too late to crash any parties or track down the best free oysters. I also needed a bathroom. None of the hedges offered enough cover. The back of the building? Beneath me. Also, too disrespectful of Tesla. Activity often delays the inevitable, so I checked the GPS for options.

And then I saw it. 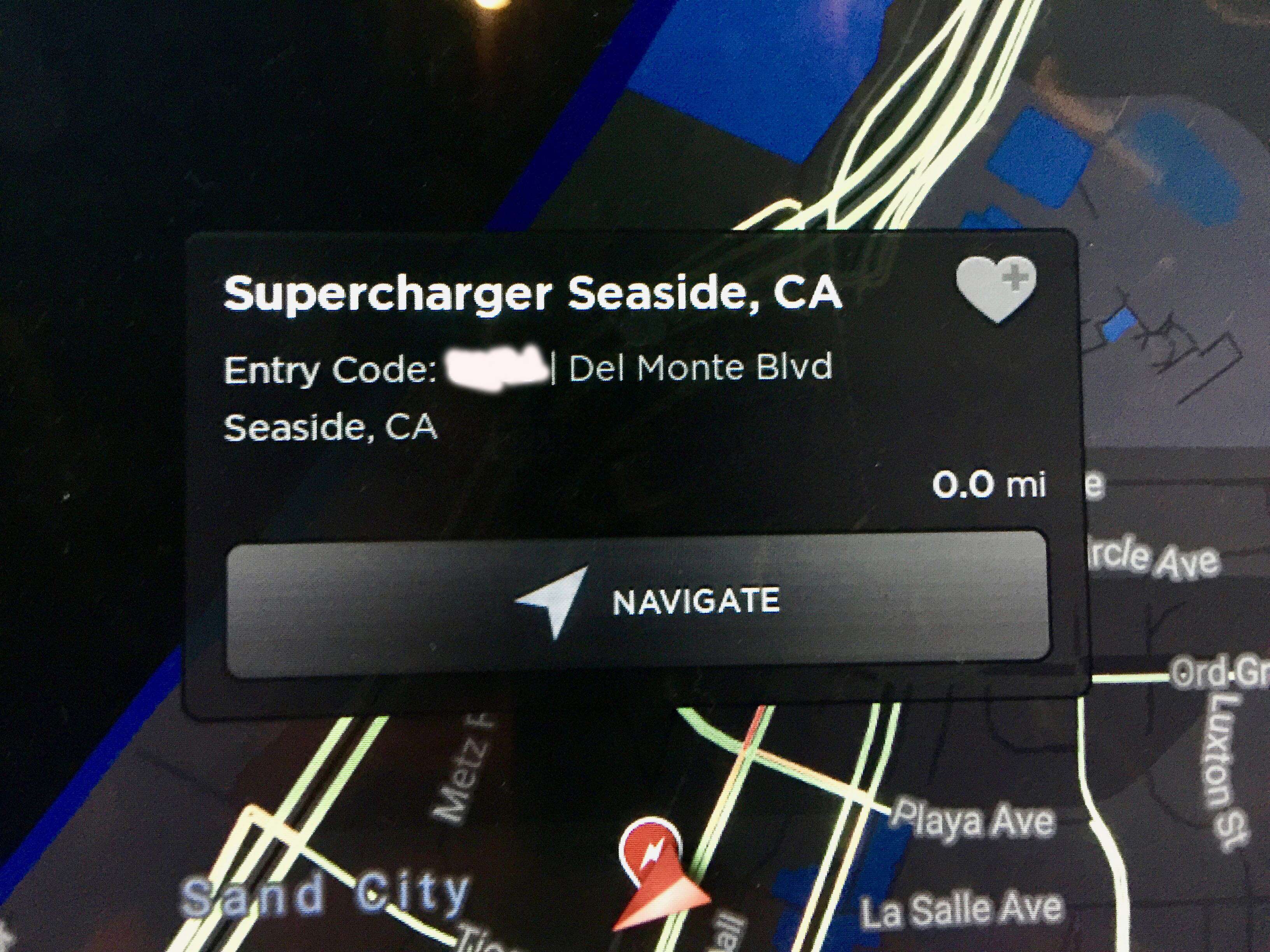 Did someone say ENTRY CODE?

Entry code? ENTRY CODE. A four digit code. I spied a keypad on the wall by the Tesla store’s side door. I limped out of the Model S, entered the code, and the door opened. I’d been to hundreds of car dealers with customer lounges, but I’d never been to one that was open at night.

This is what the Tesla Seaside store lounge looks like. 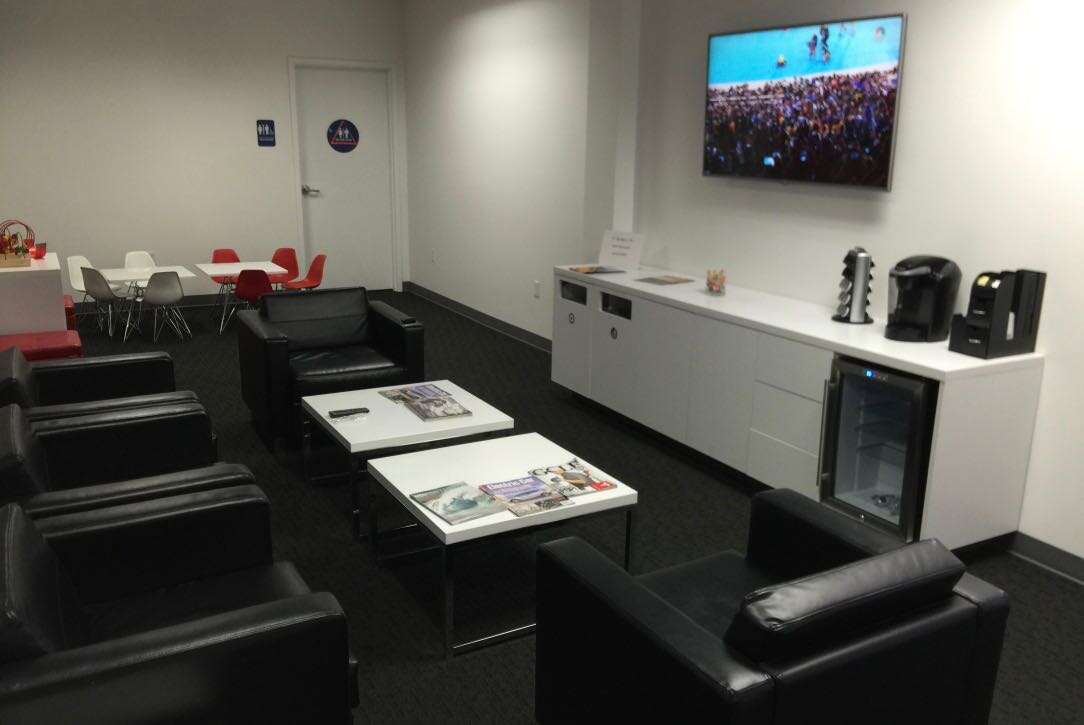 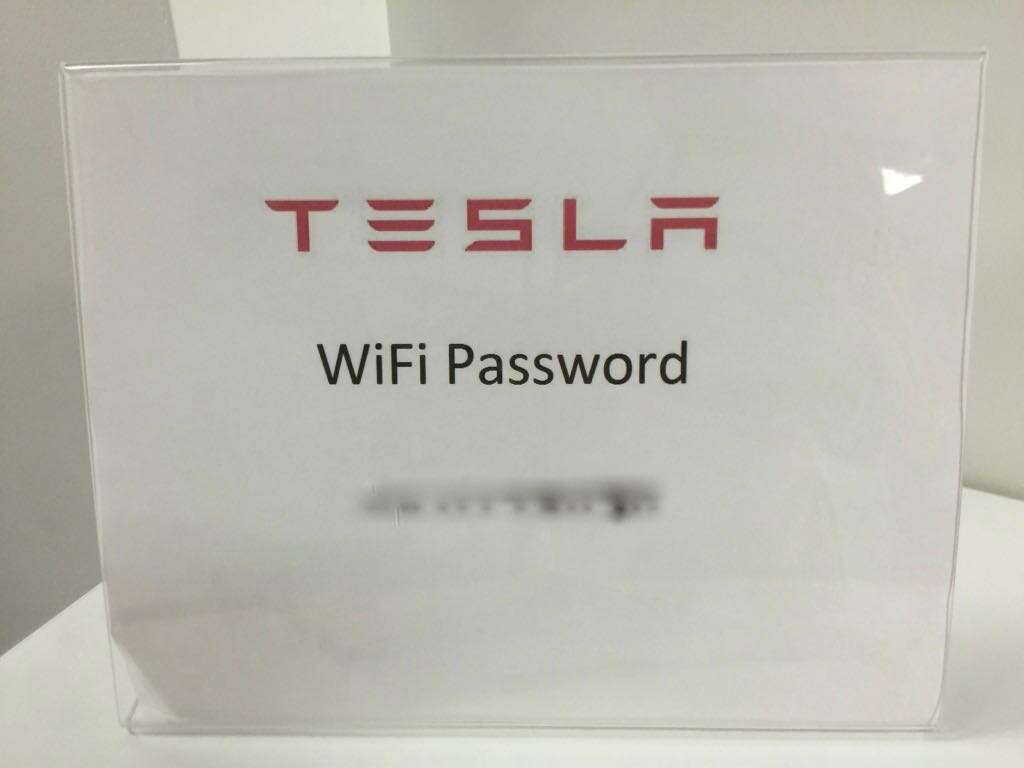 Fast wifi. For free. Better than any hotel. 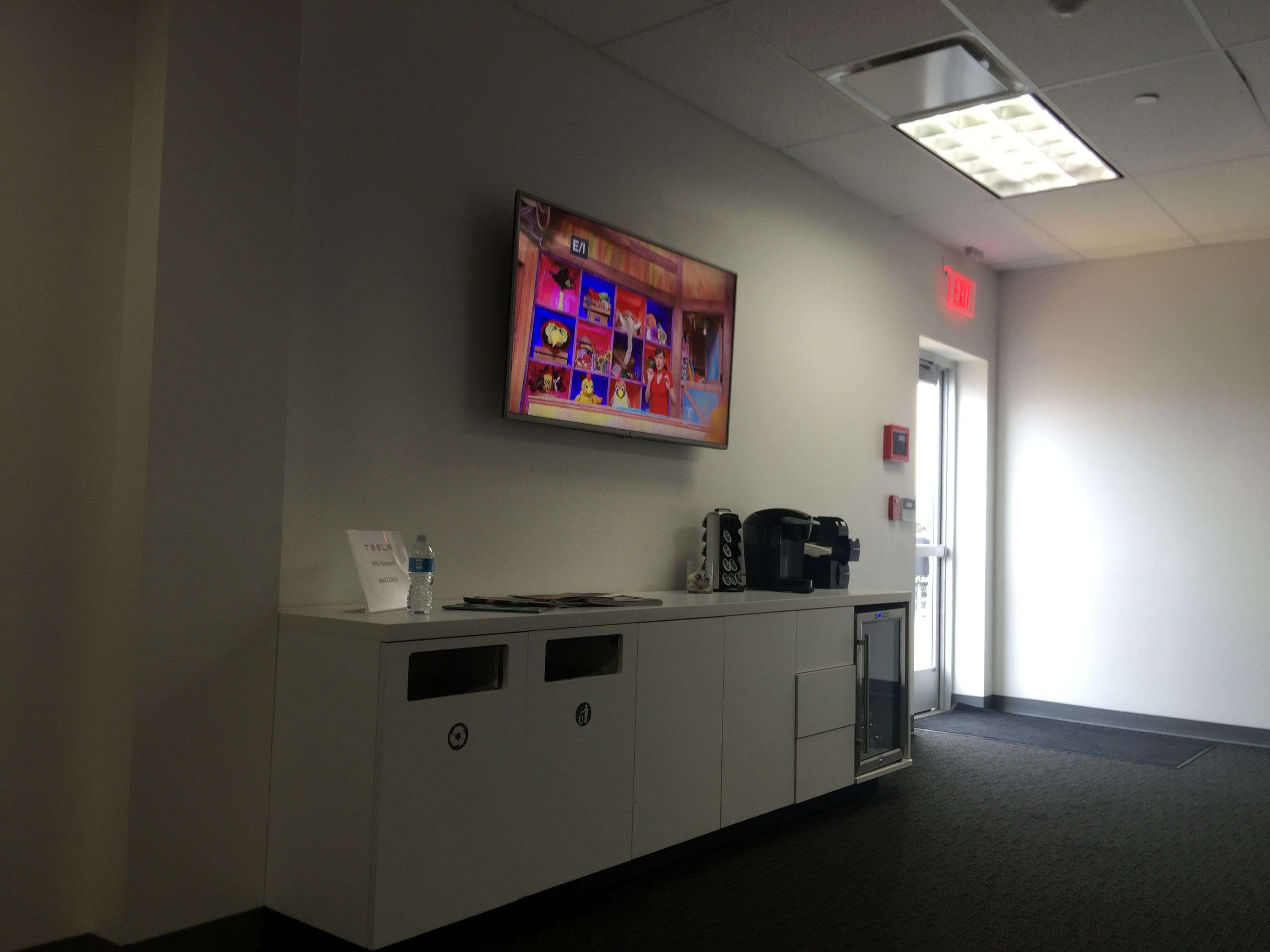 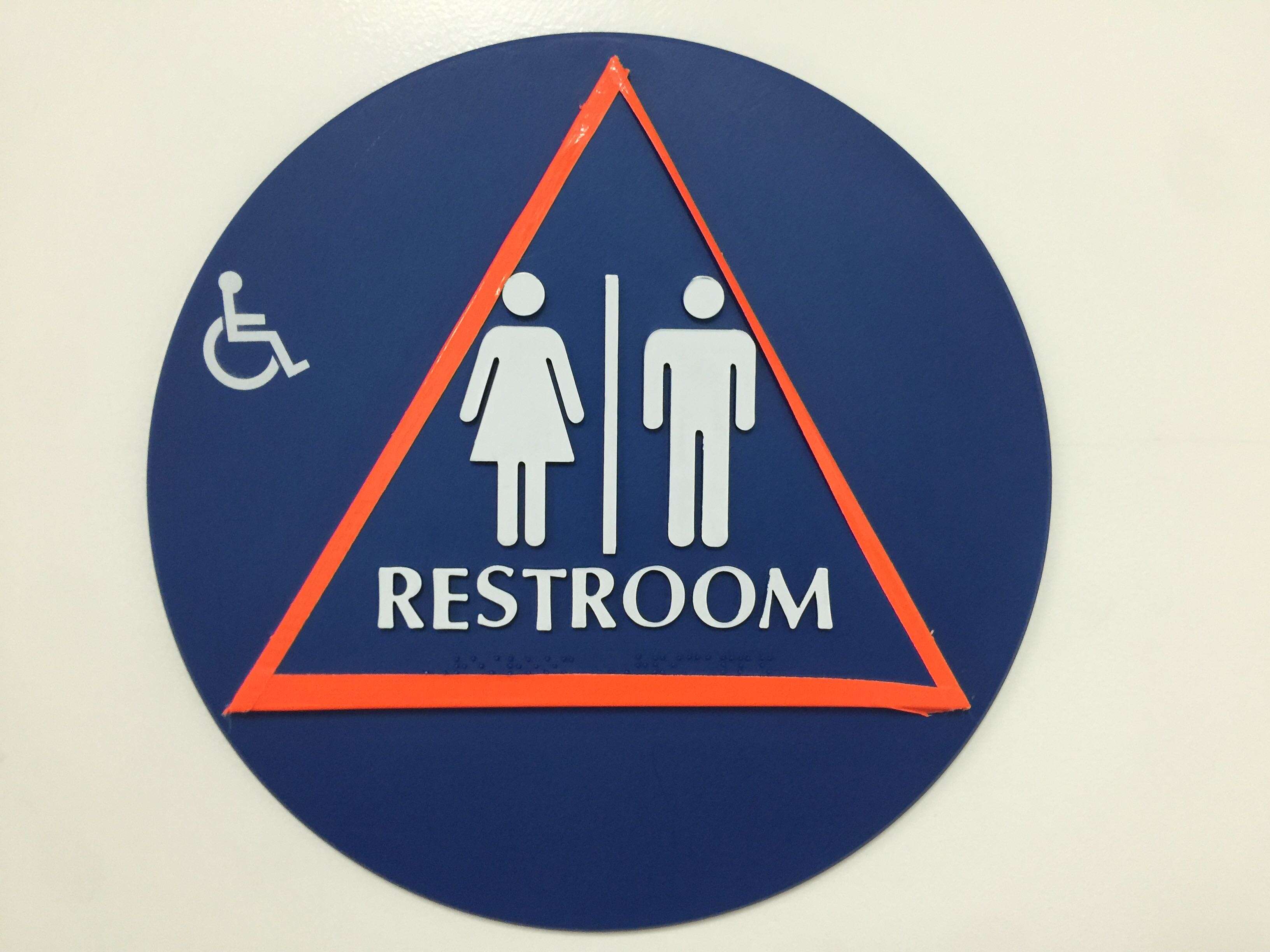 The bathroom is bigger than most hotel rooms.

Check out that clean design. Musk is a genius. 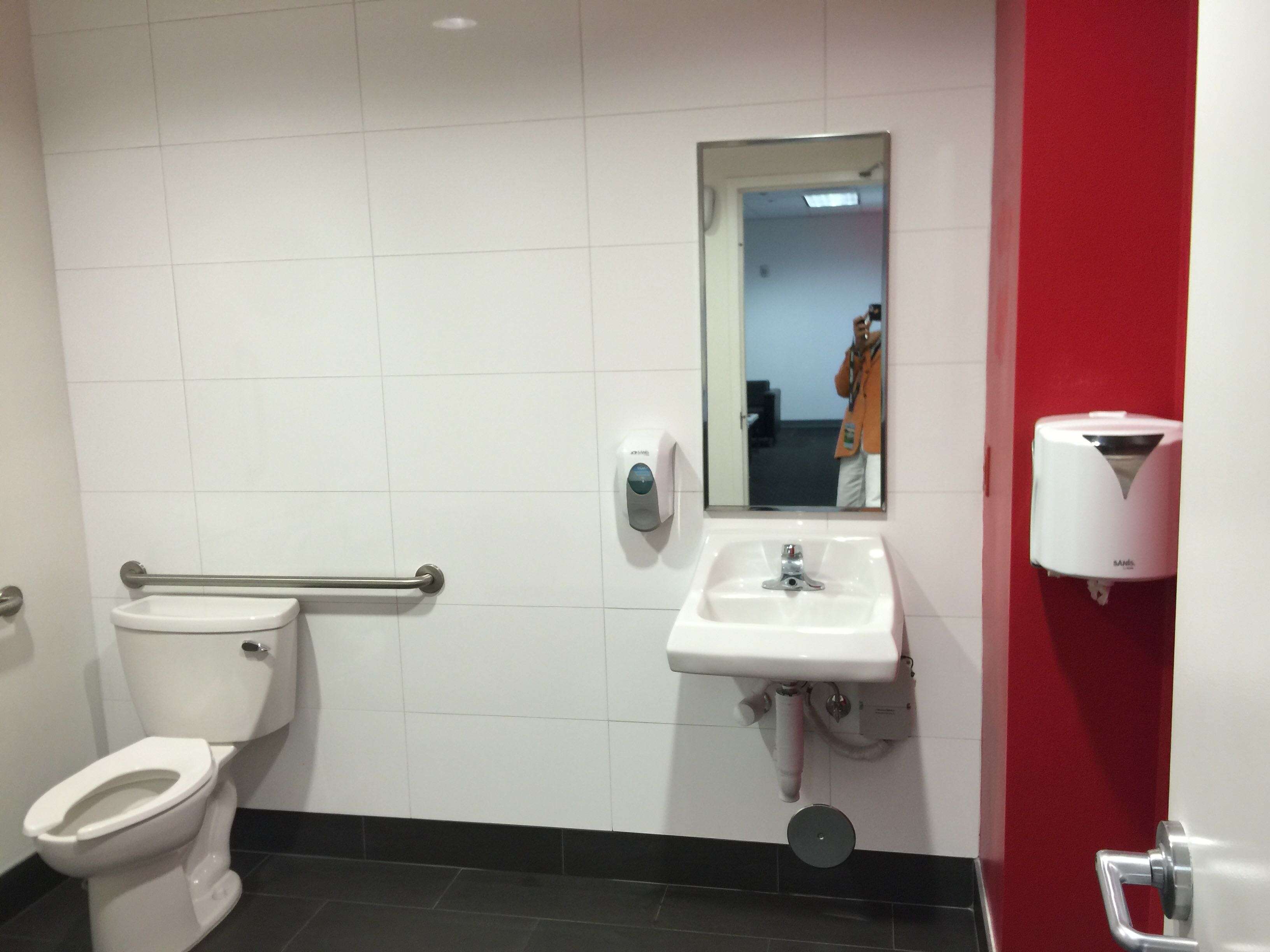 So stylish. All it’s missing is a shower.

This place was a palace. Infinitely superior to the dump I was staying in. This was easily equivalent to what passes for a 3-star hotel these days. And the Tesla Lounge was free. Store hours were 10AM to 6PM, so as long as I was in and out overnight, I was presumably golden. Was it possible? Could I move in? What could go wrong? I was a well-dressed Tesla driver who fell asleep, right? Might I save $1000+ in hotel costs? $2000? How long could I stay? Was anyone monitoring the security camera in real-time? How many other Tesla owners might come by? Would they care? 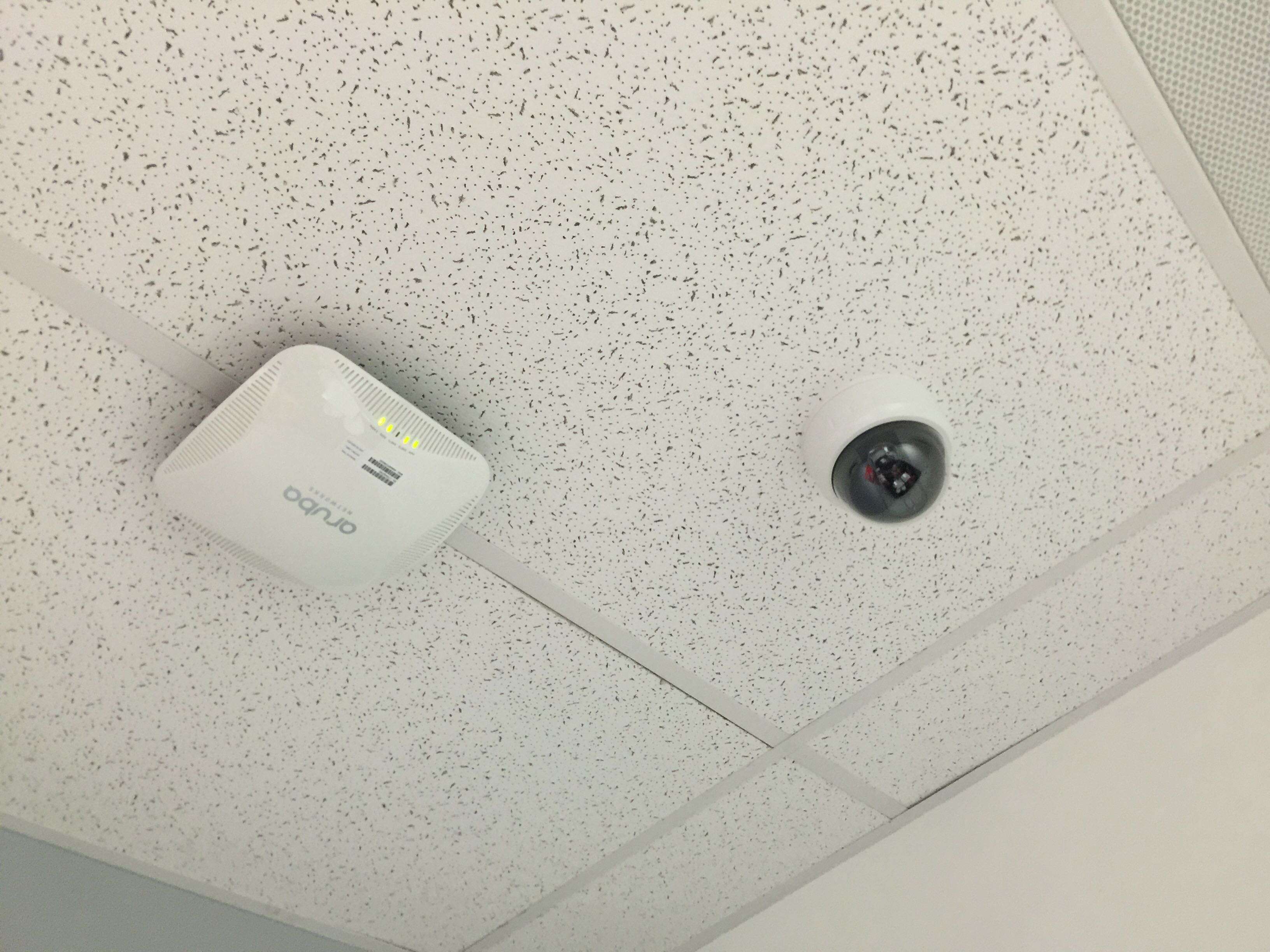 There was only one way to find out.

The first night was pretty good. I slept in a chair. I had no bedding, so there was no point laying out on the floor. It might look suspicious, even moreso in my white suit. I was only interrupted once, by two women who pretended not to notice me. There must be some sort of pact between Tesla owners. If you can afford one, you’re probably not dangerous.

A little French shower in the morning and I was off.

I brought my luggage for night #2, but left it in the car. No reason to raise suspicions. I was interrupted twice by Tesla owners, and so returned to my Model S so as not to appear creepy. In the morning I fully disrobed in the bathroom, wiped myself down and put on an entirely new outfit.

On night #3 I went to the nearest shopping center, bought a pillow and blanket I intended to return a few days later, and headed back to Seaside after a wonderful free meal on (insert unwitting German car manufacturer here).

And then the phone rang. A friend had a friend who bailed on his junket room at the Intercontinental, arguably the best-situated of the luxury hotels in Monterey.

I’m not saying that I took that free hotel room. I’m also not saying I didn’t. And I’m also not saying I haven’t gone back to enjoy the amenities at that Tesla store. What I am saying is that if you need a free place to stay, Tesla Seaside isn’t the only store with a lovely lounge, a Supercharger and low nighttime foot traffic. Some say that automation will destroy jobs and exacerbate our homelessness problem. If you’re willing to put up with some minor inconvenience, you’re only a salvage Tesla away from a decent solution.

At least you were, until this article came out.

Of course, if anyone objects, you can always sleep in the trunk. I’ve done it.

Alex Roy is Editor-at-Large at The Drive, founder of the Human Driving Association, host of The Autonocast, co-host of /DRIVE on NBC Sports and author of The Driver. You can follow him on Facebook, Twitter and Instagram.