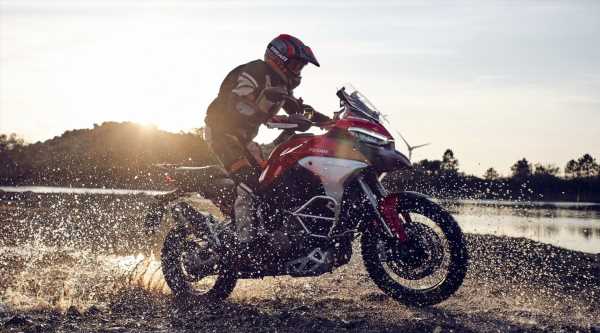 The base version of the Multistrada, the V4, comes in Ducati Red and uses Marzocchi full-adjustable 50 mm diameter front forks and rear monoshock, giving 170 mm and 180 mm of suspension travel front and rear. Brembo M4.32 four-piston radial-mount callipers are used and a 5-inch full-colour TFT-LCD screen is installed in the cockpit, along with LED headlights and DRLs. Centrepiece of the Multistrada V4 range is the V4 Granturismo power plant, displacing 1,158 cc and producing 170 hp at 10,500 rpm and 125 Nm of torque at 8,750 rpm. As a touring engine intended to cover long distances, Ducati says the V4 Granturismo only requires oil changes every 15,000 km and the first major service, a valve clearance check, comes at 60,000 km, an industry first for motorcycles.

Eschewing the use of Ducati’s Desmodromic mechanical valve actuation system (still used in the V4 Stradale engine in the Panigale V4 and Streetfighter V4), the V4 Granturismo is physically smaller and lighter, weighing 66.7 kilograms, 1.2 kg less than the 1260 Multistrada’s Testastretta DVT variable valve timing V-twin and 10 cm shorter in height and length while being just 2 cm wider despite having two more pistons with fuel carried in a 22-litre tank and weight claimed to be 215 kg.

As can be expected, technology abounds in the Multistrada V4 with riding aids including Bosch-Brembo 10.3ME cornering ABS, traction and wheelie control and vehicle hold control for starting on inclines. With the Skyhook electronic suspension, data from the inertial control unit is used to adjust suspension setting as well as auto levelling, complementing the standard settings of rider, rider with luggage, rider with passenger or fully loaded with passenger and luggage, while a tyre pressure monitoring system is available as an option.

More electronics wizardry is found in the LCD instrument display, which, in conjunction with the optional Ducati Connect System, allows for connection to the rider’s smartphone and display of navigation map inside the screen, negating the need for a separate navigation display. Also available with the Ducati Connect module is control of the phone and music functions, controlled via a joystick on the left handlebar pod with the phone itself stored in a compartment in the fuel tank that has a USB charging port.

Standard on the Multistrada V4S and V4S Sport (optional on the base model Multistrada V4) is Ducati’s Radar system. This module, developed in partnership with Bosch, provides adaptive cruise control, automatically self-regulating to the speed of the vehicle in front, and blind spot detection. In Touring mode, the engine response is smoother and less direct while traction and wheelie control is set to maximum while in Urban mode power is reduced to 115 hp, useful for heavy traffic or wet roads. Combined with ABS set to level 3 and cornering ABS optimising front/rear combined braking, Touring mode is optimised for long distance riding comfort.

Enduro mode if for off-road riding, which, with the 19-inch front wheel on the Multistrada V4, it is fully capable of. In this mode, the engine deliver 115 hp and wheelie control is turned off, while ABS only functions on the front wheel at Level 1. Attention has been paid to both rider and passenger comfort, with the Multistrada V4 spending time in the wind tunnel to improve aerodynamics and reduce wind noise while improving protection from the air flow. The wind screen is one-finger adjustable and comes with additional wind and hand deflectors while biplane spoilers mounted on the sides of the engine divert heat.

Seating arrangements on the Multistrada V4 is a two piece affair, with the rider’s seat cut narrow to allow getting both feet on the ground while the pillion seat is wider and plusher than before, increasing passenger comfort. The rider’s seat is a two-height adjustable affair, with 840 mm and 860 mm seat heights while a 810 mm low seat and 875 mm tall seat are available as extra cost options. Rider comfort is further improved with rear cylinder bank deactivation when the Multistrada is at a stop. This, combined with the new front fairing featuring “shark gills” on the sides, reducing heat while improving fuel economy.

A range of factory packs is available for the Multistrada V4, providing the rider with a range of options to customise the bike to taste including spoked wheels if desired. These are the Travel Pack which comes with panniers, centre stand and heated rider and passenger seats, the Travel and Radar which adds cruise control and radar and the Sport Pack which consists of the Akrapovic exhausts while the Full Pack puts all the options on the Multistrada V4.