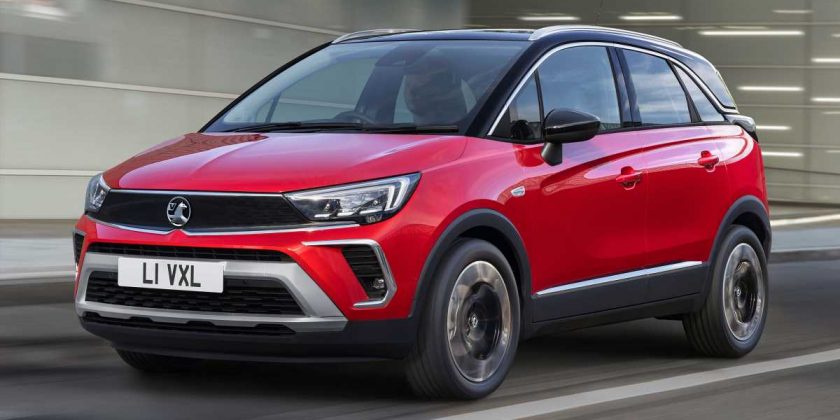 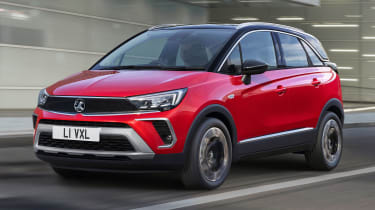 Vauxhall has launched the updated Crossland SUV in the UK. Prices start from £19,060 for the entry-level SE model and climb to £27,430 for the range-topping Ultimate Nav. Deliveries are expected to arrive in early 2021 for the new Nissan Juke and Renault Captur rival.

The mid-range SE Nav Premium model starts from £20,210 and adds front and rear parking sensors, a reversing camera and LED fog lamps. Inside, there’s an improved eight-inch infotainment system with an integrated sat-nav system, while the driver gets a more supportive seat.

The comfort-focussed Elite model has a starting price of £22,610. It features the same level of technology as the SE Nav Premium variant, but adds a range of upgrades for the cabin such as leather upholstery, heated front seats and a heated steering wheel.

Vauxhall’s more generously equipped Elite Nav model bumps up the Crossland’s price to £23,110 – but it builds on the Elite model’s spec sheet with a wireless smartphone charger and a 180-degree panoramic rear-view camera.

Finally, the range-topping Ultimate Nav model has a starting price of £25,615 – for which buyers get Alcantara seat upholstery, keyless start and silver roof rails, along with all the equipment from the Elite Nav grade.

Vauxhall hasn’t changed the Crossland’s engine range, save for a few efficiency tweaks. The petrol range is still based on PSA’s familiar turbocharged 1.2-litre three-cylinder engine, which is available in either 82bhp, 108bhp or 128bhp outputs. All three engines can also be specced with either a six-speed manual or six-speed automatic gearbox.

The crossover’s diesel range has also survived the facelift intact. Buyers will still have their choice of either a 108bhp or 118bhp unit – both of which are based on PSA’s turbocharged 1.5-litre four-cylinder unit. The former unit is mated to a six-speed manual gearbox as standard, while the latter is only available with a six-speed automatic.

The updated Vauxhall Crossland features the brand’s latest “Vizor” front end, which was first seen on the second-generation Mokka. It comprises a blanked off, high-gloss black radiator grille that flows into a pair of intricate LED headlights.

Vauxhall has also fitted a new vented front bumper, which apes the design of the Mokka’s, along with a new high-gloss black tailgate, smoked LED tail lights and a fresh set of 17-inch alloy wheels. Finally, like the Mokka, the updated Crossland will drop the “X” suffix off the end of its nameplate.

However, Vauxhall’s revisions are more than just cosmetic. In an effort to curb some of the wayward slow-speed handling characteristics of the pre-facelift Crossland, Vauxhall has also fitted new springs, fresh dampers and a tweaked steering system, which the company says will provide better steering feedback and improved driving dynamics.

Little has changed in the Crossland’s interior. It shares the same infotainment system and dashboard design as the outgoing model. However, buyers will be offered a decent level of safety technology – Vauxhall says the revised crossover will come with a pedestrian recognition system, along with forward collision alert and a 180-degree parking camera.

What do you make of the revised Vauxhall Crossland? Let us know in the comments section below…