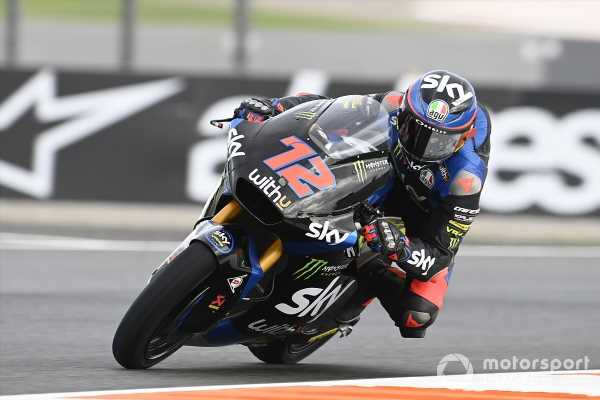 Marco Bezzecchi dominated the Moto2 European Grand Prix while fourth-placed Enea Bastianini took the lead in the championship after a crash for Sam Lowes.

Lowes’ golden run of three-successive victories put him seven points clear in the standings ahead of Sunday’s Valencia race, but he now trails Bastianini by six following a crash while chasing down the leader.

Xavi Vierge converted pole to the holeshot off the line at the start, though would lose the lead to American Racing’s Joe Roberts at the Nieto left-hander.

Roberts’ bid to become the first American grand prix winner since 2011 came to an at Turn 2 on the second lap when he crashed out, releasing Bezzecchi into the lead with SAG’s Remy Gardner giving chase.

Lowes got stuck behind Vierge in the early stages and had several front end moments on his Marc VDS Kalex as he attempted to take third away from the Pertonas Sprinta rider.

The Briton finally got the job done at Turn 2 on lap five and immediately closed in on Gardner ahead, as Vierge soon came under threat from the Ajo KTM of Jorge Martin.

Lowes got ahead of Gardner at Turn 11 on the 10th tour and tried to pressure Bezzecchi out front.

But the gap between the pair hovered around the 0.5-0.7-seconds margin until lap 16, when Lowes crashed out at Turn 6.

The proved to be a gift for VR46’s Bezzecchi, who managed his gap at the head of the pack and eased to the chequered flag by 1.9s to claim his second win of the year and bring himself back into championship contention.

Bezzecchi’s race wasn’t completely without incident, as he admitted in parc ferme he was struck by a small technical issue in the closing stages. Fortunately, the problem didn’t worsen.

Martin held onto second for his fifth podium of the season, with Gardner on the 2019-spec Kalex chassis completing the rostrum in third.

Bastianini’s charge from 15th on the grid concluded in fourth, putting him six points clear of Lowes in the championship, while a sixth for an injured Luca Marini – who will step up to MotoGP in 2021 with VR46 and Avintia – means he’s now 19 points behind the new standings leader.

Lorenzo Baldassarri scored his best result since he was second in Qatar back in March in fifth on his Pons Kalex, with teammate Hector Garzo seventh after Marini pipped him late on for sixth.

Nicolo Bulega was eighth on the Gresini Kalex, with Vierge fading to ninth at the chequered flag ahead of the Speed Up of Jorge Navarro.