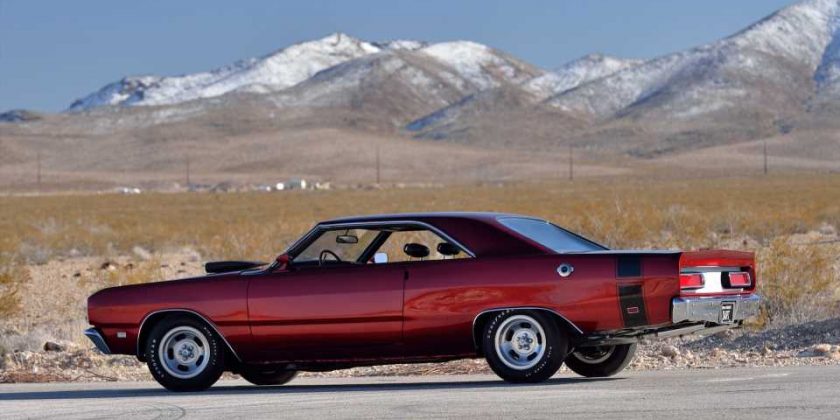 Before its official debut in 1969, the Dodge Dart Swinger 340 Concept appeared at the 1969 Chicago Auto Show previewing the production Swinger 340. While it wasn’t a radical change from the A-body Dart, it was a hint as to what was coming in the package later that year. Now, you can potentially own the original concept through a winning bid at the 2022 Kissimmee Mecum Auto Auction on January 6-16 in Kissimmee, Florida.

Other than being a restored, classic A-body Dodge Dart, this Swinger 340 Concept is historic due to it being the visual lead up to the Swinger 340 package. Utilizing the talents of Detroit’s Alexander Brothers, Chrysler created a show car that would be revealed at the 1969 Chicago Auto Show and travel in a limited show circuit to help buyers envision a budget muscle car for the masses.

You should also consider that concept cars—which usually aren’t or are no longer road-legal—are typically destroyed or lost in storage somewhere and never see the light of day ever again. At best, a concept is owned by a private collector that squirrels their collection away from public view. This Swinger 340 Concept was once part of the Steven Juliano collection and was restored to its original state using original and New Old Stock (NOS) parts. The Swinger 340 Concept is a true one-of-a-kind purchase for the future bid winner and we hope that person will allow this Swinger 340 Concept to have a public display rather than hide it away.

The changes made to the Swinger 340 Concept aren’t drastic between it and the standard Dodge Dart. The most notable differences between the two are the square Cibie headlights and round, center mounted fog lights in the grille with special chrome trim; the long, rectangular tail lights that are reminiscent of the Dodge Challenger, but are a custom design; the Ansen Sprint slotted aluminum wheels; and that interesting looking (and non-functional) hood scoop.

The other interesting detail of the Swinger 340 Concept is its lack of windshield wipers, but the motor for them is still present. The concept and the production Swinger 340 would both get hood pins, though those were an option on the production version. The flip-top fuel door, on the other hand, was not a factory Dart option, and it was borrowed from the 1969 Dodge Charger. The rear spoiler is molded into the quarter panels and deck lid for a very clean look. The original Dart door handles were shaved off and hidden within a small vertical opening. Together with the other body touches, the Swinger 340 Concept has a bit of a European flair to it. Well, minus that hood scoop.

The body of the Swinger 340 Concept wears a stripe on the rear quarter panel tail similar to the eventual Swinger “Bumble Bee” tail stripe. Mecum calls it a “Scat Stripe,” but we’re not familiar with it being called that back in the day. Regardless, the body is finished in a beautiful maroon with bullet-like side mirrors that are also finished in the same color. (It would be more on the normal side to see them in a chrome finish.) Another striking difference between the Concept and the eventual Dart Swinger 340? The roadgoing Swinger had either a single driver’s side or a pair of round chrome outside mirrors as an option.

Under the 340 Concept’s hood would be the same engine as the eventual Swinger production car: a 340-cubic-inch LA-series V-8 with a Carter AVS 650 CFM carburetor on top of the intake. It backs up to a proper three-pedal, four-speed manual transmission, mostly for the sake of reliability. It also came with power steering and brakes, which were options on the production Swinger 340. Both concept and production would use a Hurst four-speed shifter and polished square exhaust tips, as well.

You’d be hard-pressed to say this unique 1969 Dodge Dart Swinger 340 Concept isn’t a worthy purchase for any Dodge enthusiast, let alone any Dart fanatic. You’ll get your chance to bid on it at the Kissimmee Mecum Auction that takes place in Kissimmee, Florida, on January 6-16, 2022. Despite no mentions of its opening bid, we fully expect this Dart to hit the six digit mark, easily, as it last sold for $110,000 in 2019.