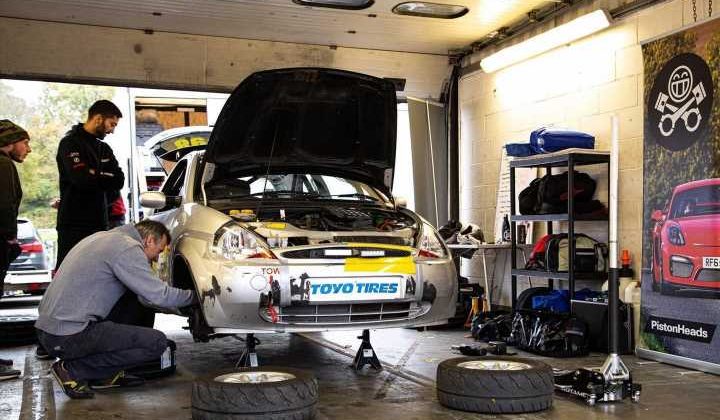 You may have been keeping up with our attempts at racing in the EnduroKA – well, our final effort took place last Sunday. One final shot at victory, to be forever immortalised on an engraved milk bottle. This may seem a little repetitive by now, but we’ve come painstakingly close to a win on more than one occasion, only to lose it through normally our own doing. We’ve made enough mistakes now that we should know how to finish on top of the podium. Even if Le Mans LMP1 winner Nick Tandy had entered a car…

Despite being a team event, naturally there’s always one or two people that pull their weight more than others. Most of us pitched in on the new build back at the start of this year, but other than that, it was mostly going to be down to RacingPete to prep and transport the car this year. He’s been an absolute trooper and this year’s racing wouldn’t have been possible without him, in more ways than one.

Moores Motors in Wokingham are well known and well used amongst teams in the paddock for building, maintaining and running cars at race weekends. Luckily, they’re just around the corner from Pete so when we get really stuck, they’re well versed in working on these cars. All we needed for the IndyKA 500 at Brands Hatch was a fresh set of rear bearings and we were good to go. Until Pete read the regulations a week before the race and realised that we hadn’t swapped our spotlights over from our old car – good thing someone was on the ball.

We entered qualifying on Saturday as we have most of our races this year, with no prior testing or track days at each circuit beforehand. All the cars were dyno tested to double check no one had slipped a charger of some shape under the bonnet, and our little Ka made a mighty 72.0 bhp, which was at the higher end, compared with others in the mid 60s. Clearly a strong motor, so no excuses for a poor performance.

Quali arrived, and yours truly was heading out first to scrub in our fresh set of Toyo R888R tyres. Driving out of the pit lane, I made it through Paddock Hill and avoided the gravel trap (see Brands Hatch race report 2020. Even driving like Miss Daisy, I managed to go very sideways through Graham Hill on the fresh rubber.

Handing over to Sam, we were quickly up to P3/45 thanks to his much more rapid pace – I’ll put that down to my excellent scrubbing skills. Pete and Olly were in next, and we settled for a P9 start. Given that we started in last place here last year and ended up finishing P2, we accepted the challenge…

Just when we thought we’d be heading home for a good night’s kip, the scrutineers pulled in our car among others to check our cams and throttle body. Thankfully not a huge job to whip off the cam cover and air box, and we’re grateful that these checks are being done to ensure no one is cheating and keep everyone on a level playing field. That said, we do feel sorry for the teams that had to remove their gearboxes at Oulton Park.

Somehow at the end of November, there was barely a cloud in sight, and we were due an unexpected dry day of racing. Heading into Sunday morning, things were looking good, until we’d made it five minutes into a 500-minute race when the car behind drove into the back of us, shearing our exhaust hangers and leaving our exhaust flailing around underneath the car. Bugger.

Thanks to Olly’s quick work and the help from team PSR who were sharing our garage with us, we had our car back out in just over two minutes…. until 20 minutes later when it came loose. Olly strapped up the exhaust with metal ties, and after a longer stop this time with some burned hands and plenty of swearing, we were back out racing, six laps down from the lead already. Our hopes of a win were pretty much over.

Sam did what he does best: catching and passing nearly 20 cars over the next hour before it was time for Racing Pete to step in. With a splash and dash, we only lost six places pitting under a safety car, but we had a long way to go from P33. Pete settled into his faultless session quickly, reciting all sorts of F1 quotes over the radio as he passed car after car, moving us up to P17 during his 1hr30 stint.

Then it was my turn after a longer pit stop, heading back out in P38. With barely any time on track during qualifying and no practice (getting my excuses in early) I was dropping place after place, getting more and more frustrated with how long it takes me to pick up my pace.

If someone is clearly faster behind me, I won’t hold them up, I’ll let them past and follow their lines to pick up their pace. Well, until I get to my switch point where suddenly I’m faster than them – I was flying back past the cars that had overtaken me and quickly climbing places.

A packed-out grid of 45 cars may seem a bit daunting but when you’re on track, it makes it so much more fun getting stuck into a pack of cars and working your way through. Safely, I should add, as unlike the car behind us that sabotaged our race just minutes in, I’ll always back off if there’s the slightest chance of contact.

Just as we thought we might be in chance of a top 10 finish, yet again the exhaust came loose, resulting in a much longer pit stop and nothing left but to go and have fun. Which is exactly what Olly and Sam did to finish the race and bring our car home one final time for the PistonHeads Racing Team, finishing P20/45 after 500 minutes of excitement, elation and frustration.

Not the end to our EnduroKA journey we had hoped for, but as the saying goes, that’s racing. Even though we didn’t bring home any metalware (or glass on this occasion) we had an absolute blast. There’s nothing quite like being bumper to bumper with a pack of Kas, having to judge your braking and turning points blind as you can’t even see the track in front of you. And hoping that the car in front doesn’t suddenly slam their brakes on, either.

There’s such a buzz in the paddock, too. With 45 cars, most garages are shared by two teams and we were once again sharing with team PSR, a group of lads from Sheffield with more might than a mighty thing who will do anything they can to get a car back on track. They had the worst luck this weekend being collected by other cars on track both in qualifying and during the race – it was awe inspiring just to watch them hammer their car and work as fast as possible to get it back out, when most others would probably call it a day. They may have finished P39, but they still finished.

We’d all like to say a huge thanks to everyone that has made this possible for us and kept us going, particularly Stuart Garland at MSVR, Jamie Moore at Moores Motors and Dan (sometimes known as geeks) for being our team manager. Thank you to all our sponsors that have supported us – Burton Power, Motorsport Tools, Intarace, Powerflex, 1st Tickets, Demon Tweeks and last but not least, all of you who’ve read our content and cheered us on along the way. Now, anyone wanna buy a banged up Ford Ka?