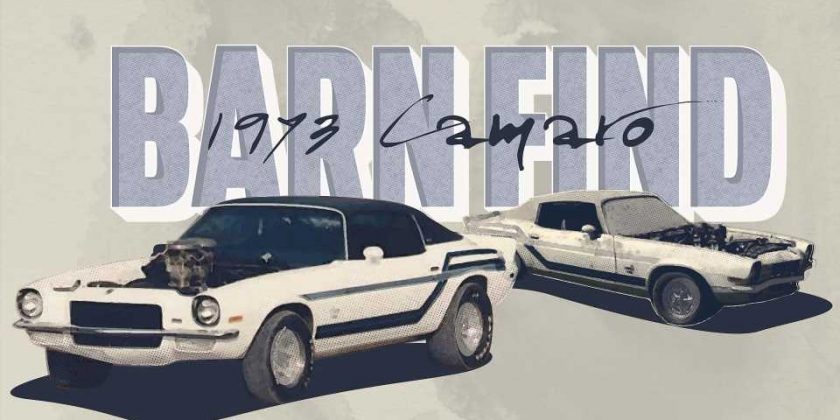 We’ve often said that the stories behind many barn finds are as interesting as the cars themselves. A good illustration would be this 1973 Chevy Camaro that was recently pulled from a barn after being stored away for decades. With the tunnel-ram-equipped small-block and retro graphics, it’s a true artifact and a good reminder of where hot-rodding came from.

As Glenn Friant explained, “My girlfriend at the time (we got married in 1982) Maria Peterson bought the white 1973 Camaro. After a few months she decided she wanted a new motor and a new paint job. So we, along with a great friend named John Logan (he rebuilt the motor and painted it), took the Camaro apart and redid what we could. Maria worked nights as a waitress to get the money up for the car which she named ‘Pegasus.’ Her dream was to redo the whole car and have it painted candy-apple red, but she decided to go with white until she could save up to paint it her favorite color. It turned out great and we took it to car shows and cruise nights. Then, in 1983, we had our daughter Candice. We did drive the car a little, but life had begun to take over. In 1985, we ended up getting a divorce and she remarried and had two more daughters. One day she went to get the car and the starter had gone bad, so she put the car in her dad’s barn until she had time to fix it. I think that was around 1988.”

Friant continued, “Maria was raising 3 daughters and working, so the car was on hold. Then a few years later she was diagnosed with cancer, and the car was the last thing on her mind. In 2008, Maria had passed away from the cancer and the Camaro had to be moved because they were afraid the barn would fall in on it, so they moved it to her dad’s place and that’s where her Camaro stayed until 2019, when I went out to her dad’s farm and got it for my daughter. It was always her mother’s wish to have Candice get the car. So now the Camaro sits in my backyard under a lean-to, and my daughter still has plans to make it the car her mother always wanted. I still haven’t washed off the dirt and dust from the barn. It does get wet when it rains but it’s still dirty to this day.”

The Camaro itself is a real blast from the past! The graphics seem wild by today’s standards but were actually pretty mild compared to what others were doing. The vintage tunnel-ram is still there, complete with dual Edelbrock carbs, the fuzzy dice that have been there for decades are still hanging from the rearview mirror, and, as a huge bonus, a full set of slot mags were found hiding in the interior! If we had one wish, it would be that this 1973 Camaro would be cleaned up and put back on the road, still rocking its vintage vibe—even if it’s a candy-apple red version.