Forget the Rapid. This is a far more upscale compact hatchback.

The road to reveal has been surprisingly short considering the first news about the Skoda Rapid’s replacement emerged only in July this year. After a couple of spy shots, a few teasers, and preliminary technical specifications, the Scala is here. Rather than sharing the spotlight with all the other automakers at the 2019 Geneva Motor Show, Skoda has decided to organize a dedicated event in Tel Aviv, Israel to better show off its new five-door compact hatchback.

At 4362 mm long, 1793 mm wide, and 1471 mm high, the new Scala is longer, wider, and taller than the Rapid Spaceback. Its 2649-mm wheelbase is also slightly longer than the Spaceback’s, and that translates into a more spacious cabin further optimized by switching to MQB A0 underpinnings. Not only there’s more room for passengers, but the trunk’s volume has also increased from 415 liters with the seats up to 467 liters. Fold them down and you get 1,410 liters or 30 more than in the Rapid Spaceback. 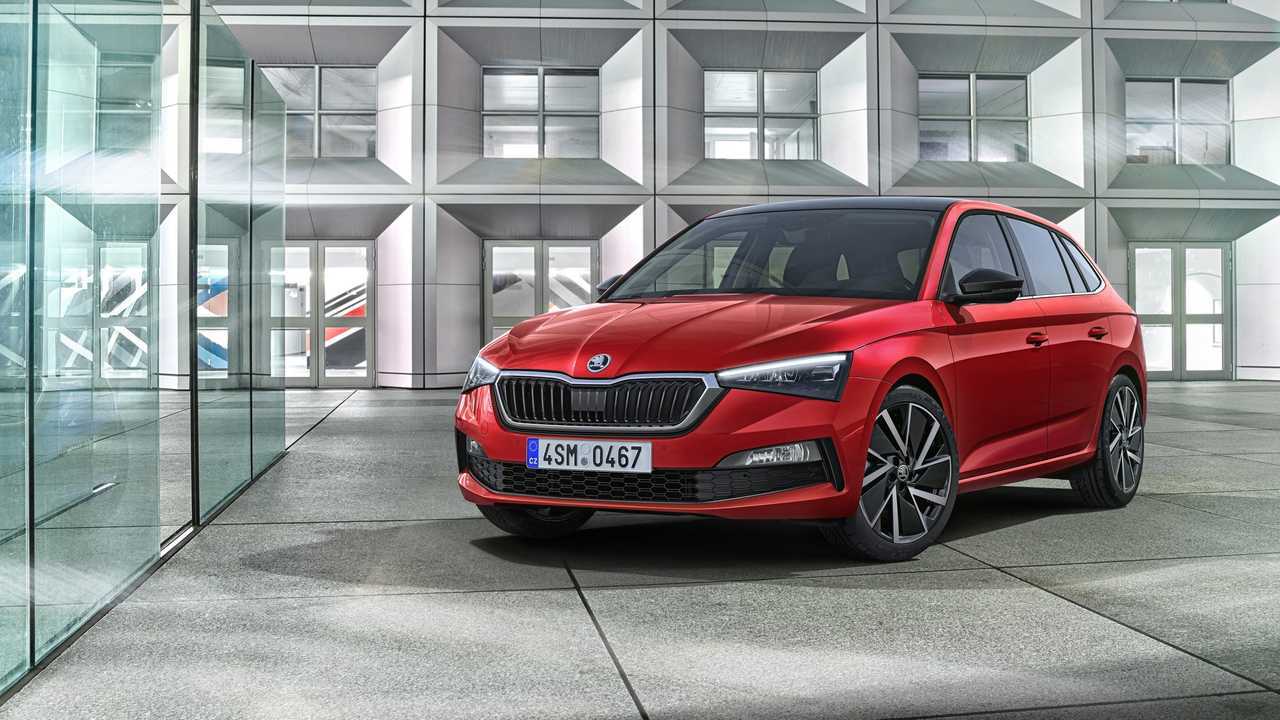 Size and practicality aside, the Scala is quite a looker compared to the relatively bland-looking models it’s replacing. After all, it certainly needs to have more pizzazz in order to go up against the hugely popular Volkswagen Golf, Ford Focus, and SEAT Leon, not to mention increasingly more successful models from South Korea such as the Kia Ceed and the Hyundai i30.

Skoda says the Scala paves the way for a fresh design language we’ll be seeing more of in the years to come. The compact model certainly has a few things in common with the Vision RS concept, but it’s obviously not as exciting, though we’re keeping our fingers crossed a potential Scala RS hot hatch will add more spice. That being said, the official word, for the time being, is an RS-badged version is not on the agenda.

The oily bits are all too familiar to people in the know about Volkswagen Group’s engines and gearboxes. Base models will be powered by a three-cylinder 1.0 TSI with 95 horsepower linked to a five-speed manual gearbox, followed by a 115-hp version of the same gasoline mill connected to either a six-speed manual or an optional seven-speed DSG.

Step up to the 1.5 TSI and you’ll be rewarded with 150 hp in the same six-speed manual / seven-speed dual clutch, much like the 1.6-liter diesel rated at 115 hp. Towards the end of 2019, a 1.0 G-TEC with 90 hp on tap and a six-speed manual will be added to the range for those with a soft spot for compressed natural gas (CNG).

Inside, the differences between the Scala and Rapid are night and day. Significantly fancier, the cabin combines better materials with a generous amount of tech. There’s an optional all-digital instrument cluster measuring 10.25 inches and a 9.2-inch touchscreen for the next-gen infotainment with support for over-the-air updates and always online functionality.

The high level of tech goes beyond the toys available on the inside as customers will be able to order the Scala with full-LED headlights and taillights (with dynamic turn signals) and a system called Sport Chassis Control. The latter lowers the car by 15 mm upon activation and sacrifices some of the comfort for extra sportiness.

If you’re wondering about the car’s name, Skoda decided to go with “Scala” (Latin word for “stairs,” “ladder”) to emphasize it represents a major improvement over the two Rapid models. As it’s the case with the China-only Kodiaq GT, the company’s name is written on the back to replace the Skoda logo in a bid to make the Scala feel more upmarket.

It will be interesting to see how the Skoda Scala will perform in Europe’s crowded compact hatchback segment once it will go on sale in the second quarter of 2019.