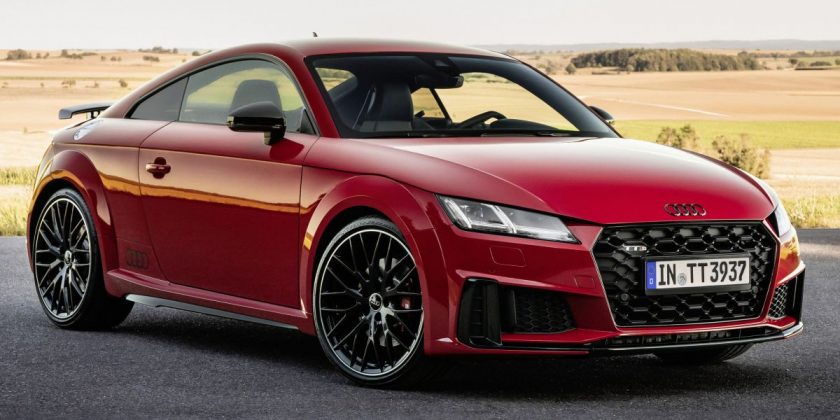 While the future of the Audi TT still hangs in the balance, Ingolstadt has updated the more potent TTS just in time for the new year. The mid-range performance variant of the ever-stylish two-door gets a mild 14 PS power bump to 320 PS, although peak torque remains identical at 400 Nm.

Despite the increased output from the 2.0 litre TFSI turbocharged four-cylinder petrol engine, the zero-to-100 km/h sprint times are identical to the outgoing model, rated at 4.5 seconds for the Coupé and 4.8 seconds for the Roadster. The top speed is also still limited to 250 km/h.

One change is that the combined fuel consumption figures have increased slightly to between 7.3 and 7.6 litres per 100 km, up from 7.1 to 7.3 litres per 100 km before. A seven-speed S tronic dual-clutch transmission, quattro all-wheel drive and magnetorheological dampers continue to be standard-fit.

In addition to the slightly more powerful mill, Audi has also introduced a new competition plus trim level, giving the TTS a sportier look and increased equipment. On the outside, the car is differentiated through gloss black (instead of silver) exterior trim, door mirrors and badging, as well as a fixed rear wing, red brake callipers, black four-ring side decals and massive 20-inch Y-spoke black alloy wheels.

Step inside, and you’ll find black quilted Nappa leather upholstery with red or blue stitching, complete with embossed S badging. The centre console and seat trims are also finished in grey as standard and can be optioned in either turbo blue or a Coupé-only tango red, the latter coming with matching carpet stitching. An Alcantara-wrapped gearknob and steering wheel (with contrasting 12 o’clock marker) are fitted as well.

If the competition plus moniker sounds familiar to you, that’s because the standard TT was given the same treatment earlier this month, with much of the same accoutrements.